Guys did you hear the big news? Leia is a Disney Princess Now! Rovio came out with a Star Wars version of Angry Birds! It's got lasers, wookiees, light sabers, and a bunch of other stuff that you remember from those movies you saw growing up that don't seem to bear much resemblance to the newer movies your kids watched. I can feel the conflict within you, though: is this going to be terrible, a bastardization of all my beloved characters, or can I set aside my disdain for everything Lucas and Rovio have done, relax, and enjoy this game? Well, that's why we have reviews, so lets get started.

The HD Difference: It's Impossible To Hit These Buttons, Even For A Computer

Before you start playing, you have to decide which version of the game you're going to go with. Thankfully, there are only two to choose from this time, instead of the three we've seen previously with Angry Birds Space and Amazing Alex. However, I still find myself having very serious issues with the distinction between them.

Here's how it works: you have two options. Either buy the free, ad-supported version, or the HD, [mostly] ad-free package. For a lot of devices, this will be perfectly fine. However, do not mistake that to mean "if you're on a tablet or high-resolution device, you can buy this to make it look a little better." On my Galaxy Nexus, I actually found that, because I have so many pixels in my display (1,280 x 720), the buttons in the game are so tiny, you'd have an easier time bulls-eyeing womprats in your T16 back home. 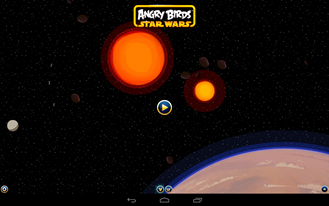 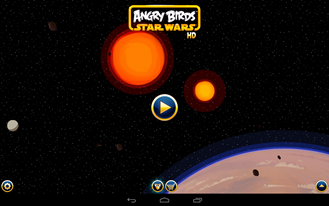 It feels less like an optional upgrade than it does a hostage situation. It's not unusable by any means, but it's mildly frustrating. It would be enough to get me to pay the extra three bucks, except that the larger buttons are literally all you get for the money. Take a look at these side-by-side comparisons and you'll notice, the graphics look great no matter which version you're using. These screenshots were taken on our Nexus 10 review unit, by the way, so if there's anything that could benefit from more pixels, it's that thing. 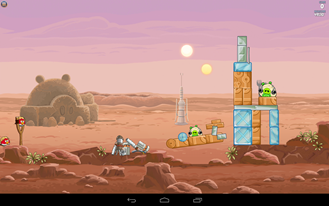 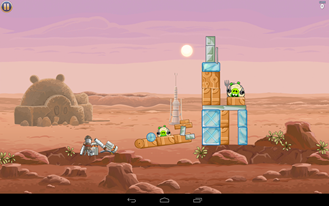 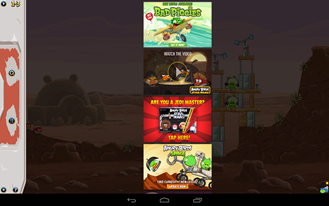 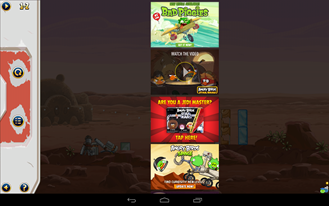 Ultimately, it's up to you whether the annoyance of having to be more precise with your button taps is worth it. On the one hand, it's nice that Rovio included the HD graphics in the free version so it doesn't look like crap on high-end phones, but that does mean the value of the $3 version is in serious question. 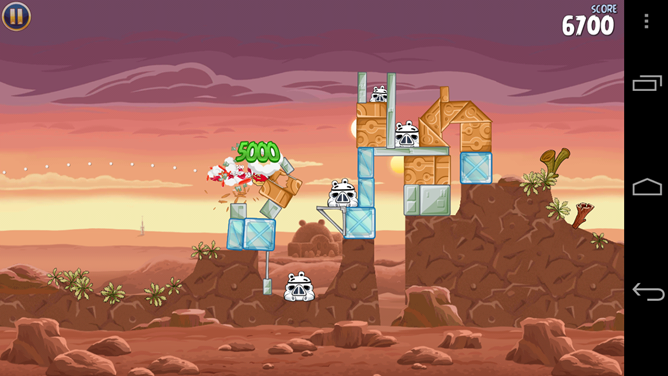 If you've played every Angry Birds game out there, you'll feel mostly at home. There will still be some new elements, but not a huge departure. If the last time you checked in with the series was with the original or Seasons, however, you're going to find a ton of new elements very quickly. This is a double-edged sword. On the one hand, it does mean there are a lot of reasons to check this game out if you haven't played in a while. On the other, a lot of the tricks you'll need to win levels here build on previous editions. You'll be especially caught off guard if incomplete is your training in Angry Birds Space.

Here's a brief run-down of what's new in just the first 30 levels if you've only played the original Angry Birds:

Honestly, it's a lot to take in if all you're used to is the original, simple, multi-colored birds from the first game.. Veterans likely won't be turned off, at all, though. I've played more Angry Birds than is healthy for me, partly for fun and partly because of reviews like this one, and I still found a challenge to it. However, when I think of the times I've watched friends struggle on level 1-16 or something in the original incarnation, I can't help but feel like this might be a bit overwhelming for anyone just entering the game now.

Strategies required to win some levels—or to get the high score, if that's what you're going for—are a lot more complex than in previous iterations. On some levels there are pigs firing off lasers at regular intervals. You might have to destroy the foundations beneath them, causing their blasters to hit other pigtroopers, for example. In one particularly fun puzzle, the highest scoring solution was to use Obird-Wan to force push a pile of small square bricks so they spray across the field. You'd be hard-pressed to win by smashing baddies in this level directly, but there are alternatives to fighting. 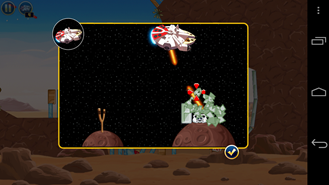 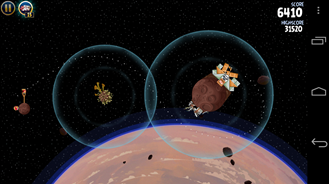 Thankfully, it's fairly easy to earn those Millennium Falcon bonus items that basically win the level for you. It's not quite a one-tap solution, but most levels can't repel firepower of that magnitude. There are in-app purchases to acquire more (we'll get to that in a second), but the game awards them to you for various achievements and it's extremely unlikely you'll need more than you receive. It's just a nice way to offset the difficulty for new players.

In-App Purchases: So You're Just Taking Your Reward And Leaving Then? 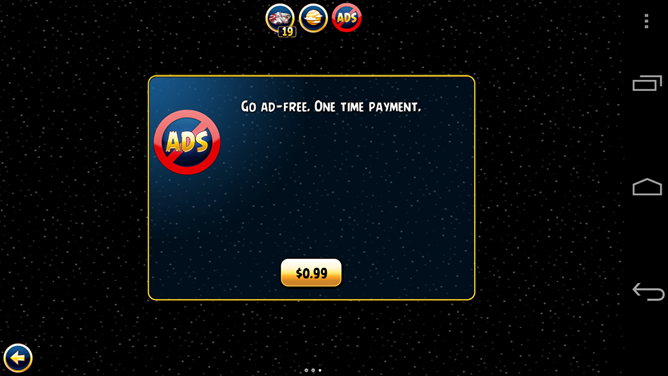 Yes, they exist. Don't worry, though, most of them are actually either not bad or completely irrelevant if you don't want to spend extra money. The big item is the ability to remove ads for $0.99. In previous Angry Birds games, there was a third version on the Play Store for the same price. Curiously, though, that one also included higher-res graphics and rendered the $2.99 version of questionable value. This model works much better as you can install the free version and, if you decide you can't stand the ads, remove them without losing your progress. The $3 entry may not be worth it outside larger buttons but, thankfully, it's at least ad-free as well. 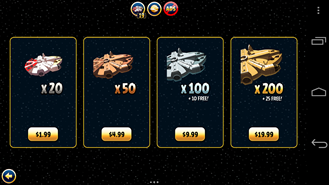 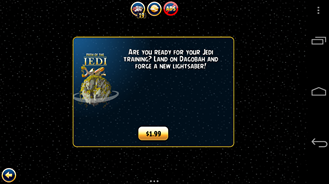 It doesn't end there, though. You can buy 20 of the Millennium Falcon bonuses for $2, fifty for $5, a hundred for $10, or two hundred for $20. This is probably not something that most of you will or should do. I honestly can't fathom why you would unless you just want to throw money away. Maybe the first tier if you're desperate to win, used up all your freebies, and don't like figuring things out on your own, but all the other levels just seem ridiculous.

Finally, there is an unlockable episode with more levels. Path of the Jedi is a Dagobah-based section with an extra 30 puzzles that can be unlocked for $1.99. This sounds like a moderately reasonable deal, though if you're itching for more to play and don't want to spend $2, you can just wait. A new Hoth-based campaign will be arriving at some point in the future for free. Again, you don't need to spend money to enjoy the game or keep getting updates.

All-in-all, the IAPs are as close to a fair compromise as you can get. As gamers, we hate seeing them pop up all over the place, and as developers, they like to make money. The unspoken rule is, as long as they're not used as tools to extort cash or disrupt the flow of the game, we'll abide them. Unlike many other games, Rovio has found a way to bring balance to in-app purchases, not leave them in darkness.

Conclusion: There Is Still Some Good In You, I Can Feel It 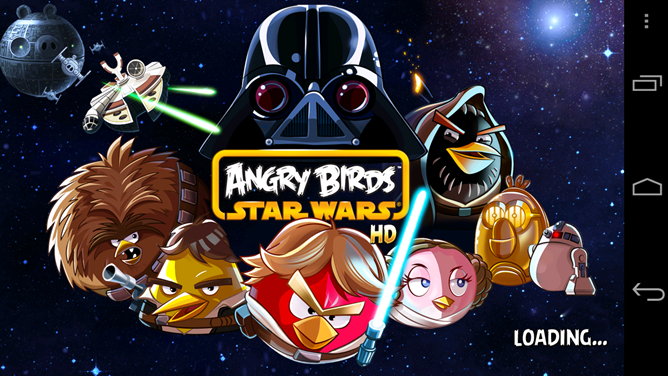 Let me be clear about one thing: if you're sick of Angry Birds, and I mean just completely over hearing about it—if you've seen these avian beasts on everything from backpacks to water bottles to underwear to your darkest nightmares and you just can't stand the sight of them anymore—yeah, you're not going to like it. You knew that coming in to this and, at best, you're looking for me to validate your disdain by saying it's more of the same old crap.

Well, in a way, you're right. This is still Angry Birds. Duh. However, as a game, it's actually got some neat add-ons. If you skipped Angry Birds Space, you'll actually find quite a bit about it that's new, different, and maybe even challenging. In that sense, it's actually a pretty good step up. If this had come out in place of Angry Birds Space instead of after it, I'd even go so far as to say it's an amazing sequel.

I've written an untold number of Rovio or Angry Birds articles since I started writing here. I've also been weary of Star Wars ever since Episode III came out in theaters. I like the original trilogy and I enjoyed the first Angry Birds, but by the time this thing came along, I was ready to never hear about either again. That being said, I walked away mildly pleased by this game. That, in itself, is the greatest compliment I could give it.

Just as Luke resisted giving in to the Dark Side—even though he did vent his anger for a while as he battled his father aboard the second Death Star, before ultimately coming back around, tossing away his light saber, and refusing to give in to hate—so, too, do I find myself accepting that there is still something good left in the Angry Birds series. No one would blame you for skipping it if you just can't stand hearing about it anymore (and I will continue to make jokes about it because they're funny), but I also can't condemn anyone for enjoying it.

So long as Jar Jar stays the hell away from future level packs, we're good. Nexus 10 Review: Good, Because Pixels And Other Reasons