Welcome to the newer, friendlier Motorola, where every would-be Android modder is catered to. After creating developer editions of both the new Droid RAZR M and Droid RAZR HD for Verizon (the first from the manufacturer-carrier combo since the XOOM) Google's new acquisition is spreading the love to AT&T. The company announced the ATRIX HD Developer Edition, complete with unlockable bootloader, via its Twitter account today. There's currently no price or date available, beyond the fact that it will be available soon. 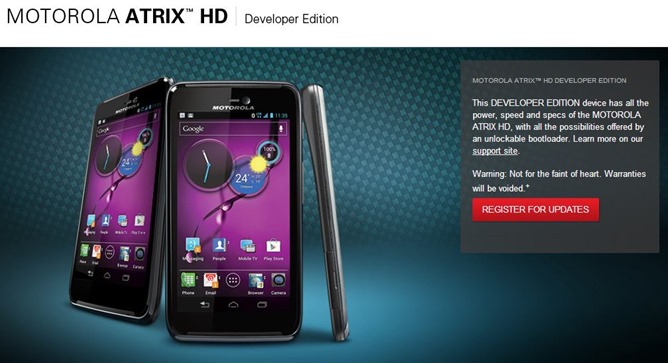 If Moto follows its pattern with the Verizon phones, the ability to unlock the bootloader will not be made available to customers who bought their phones from the carrier, on-contract or otherwise. Presumably this means that the phone will only be offered in a full-price version. Technically that means that you should be able to use it on other GSM carriers, though with AT&T's unique LTE bands, you won't be going any faster than 3G. The render on Motorola's blog features the same AT&T logo as the original, while the ATRIX HD Developer Edition page has no logo. It'll be interesting to see which one actually makes it into users' hands.

Of course, announcing a developer edition with an unlockable bootloader almost five months after the release of a highly-anticipated phone isn't going to win Moto any points with those who bought it on day one. For those who did so, I'd humbly suggest waiting for the next flagship phone to arrive - it'll probably have a more mod-friendly version available immediately.

Google Support Confirms All Android 2.3+ Devices Will Work With Physical Wallet Card And ...

Green Throttle Throws Its Hat Into The TV + Game Controller + Smartphone Ring, We Try To Be Excited