According to the support page, the new non-NFC version of the Wallet app will be compatible with any Android 2.3.3+ device, which is pretty much the vast majority of Android devices out there. This is big. This is the "circumvention" of the carriers we heard rumblings of earlier this year. 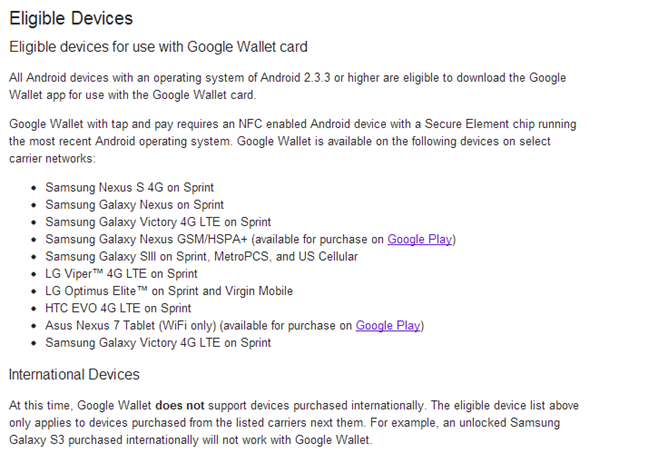 With the physical Wallet card, Google will be able to condense all your credit cards into its single-swipe nexus, which you can carry in place of all your other plastic payment providers. This adds security to your traditional wallet, as well, by allowing you to cancel just one card if your wallet is lost or stolen (the Wallet card), as compared to every card you carry. And, if you want to switch payment options on the fly, the new version of the Wallet app will allow you to do just that. I'm willing to bet Google wants to get fancy with this eventually (perhaps location-sensitive payment methods), but for now, I'm absolutely thrilled to see Wallet going a direction no one else really has. And, as the signup page for the new Wallet indicates, they're planning on making this cross-platform, eventually.

And all without the help of those wonderful, accommodating American carriers.

While the support page still says imported phones will not work with Wallet, it's unknown if this also applies to the non-tap payment version of the app, or is simply language left over from the NFC version. My guess would be that it does apply to all versions, likely to prevent non-US customers from shipping a card to an address in the US and then having it sent for use abroad.

Regardless, this is a big move for Wallet, and we can't wait for them to announce what it seems like we pretty much know for a fact at this point.

[New Game] Curiosity Is The Most Absurd, Ambiguous, And Tedious Game Of All Time