We just had a bomb dropped on us by an anonymous tipster, courtesy of a leaked version of the Google Wallet app - and it was hiding some pretty amazing secrets. Let's cut to the chase: physical Google Wallet card. That's happening, and you'll be able to get one, probably soon.

The physical Google Wallet card will work just like a regular credit card. Whatever your currently selected default card on the Wallet app is, the Wallet card will charge to. It will work anywhere major credit cards are accepted. This is for those scenarios where you don't have (or want to use) tap and pay. Imagine leaving all your credit cards at home from now on, and just carrying one, and your phone. Sure, it's not the magical future of using your phone to pay everywhere with a painless tap (let's face it, tap payments are rarely painless anyway), but this is awesome nonetheless. 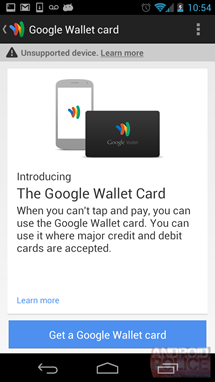 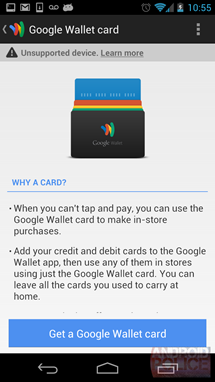 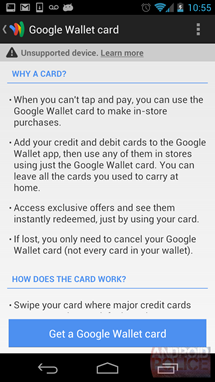 And you can get this card straight through the app, sent to your house, as our anonymous tipster did (he even got a confirmation email): 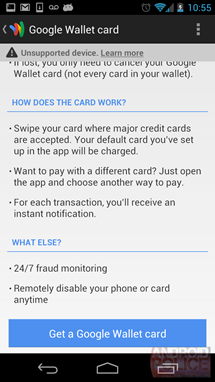 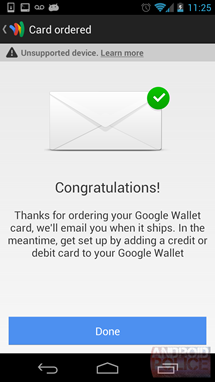 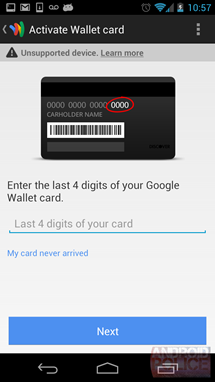 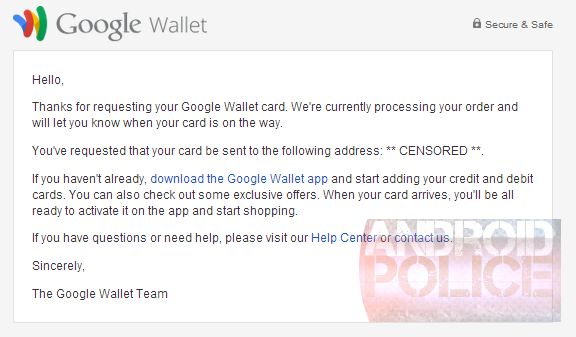 I've got to say, this is pretty awesome. We knew Google was going to announce something big for Wallet soon (there's even a sign up page), but we had no idea a physical card was in the works.

This is only part of the story, though. Other awesome new features are coming to Wallet as well. The ability to deposit and withdraw money to and from a "Wallet Balance" is being added (hopefully, this will integrate with the Play Store), as well as person to person money transfers. Transit cards? Wallet's got transit cards. 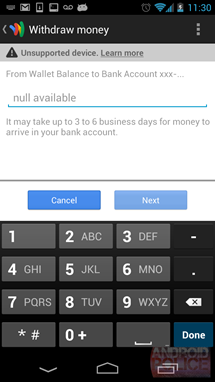 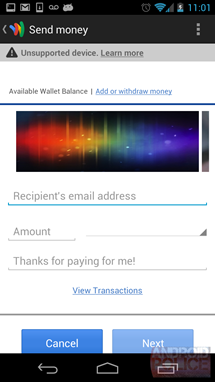 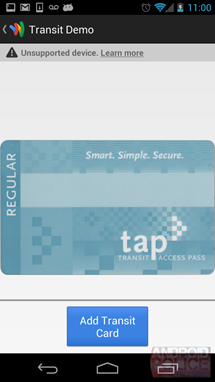 Wow. This is a lot to soak up. Wallet's shaping up to be a major contender in the mobile payment world yet again, and we couldn't be more excited. And no, unfortunately, we don't know anything about availability outside of the US.

The other important implication? The physical Wallet card could make carrier approval for Wallet a thing of the past unless you want to use tap payments. Google could publish a version of the Wallet app without NFC permissions that just allows you to switch between your cards, that could be installed on any phone (even iOS or Windows Phone, theoretically), and you just use the Wallet card for payments. That's pretty cool. And could seriously reduce the chance of rival mobile payment systems of catching on. Google really does seem to have thrown a wrench in the works of the likes of ISIS and other competing systems.

[Update: Price And Release Date] Samsung Galaxy Tab 2 10.1 LTE Making Its Way To Sprint In The ...

LG Optimus L9 Arrives On T-Mobile, Available From Wirefly For $50, Or $80 Directly From T-Mobile