Air Control meets tower defense game - that's the premise of a new game by Lemon Team, published by Amazon. This is the first game Amazon's published for Android (it's also on iOS), and it actually does look like a pretty interesting premise. You get a variety of planes which you route over a map, ala Air Control, and use those routes to destroy incoming enemies on the ground through various maps. It's a pretty cool mashup, if you ask me. 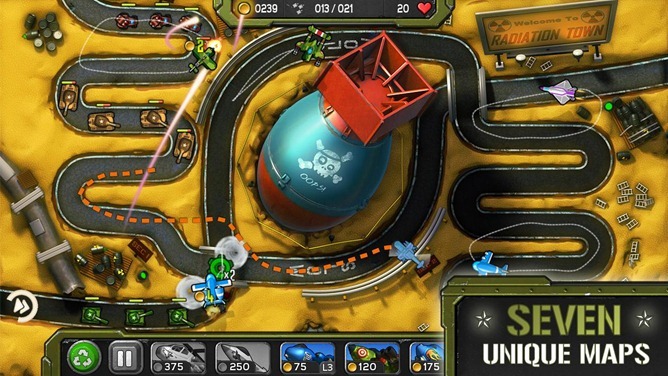 The game is free to play, and the only real push to purchase stuff comes in the form of maps, which you'll need to shell out $0.99 each for (or $2.99 for the pack) to get the entirety of the game. Personally, I'm fine with this kind of in-app purchase model, because you know exactly what you're getting - as opposed to some arbitrary in-game currency or item whose real value is basically whatever the developer decides.

Anyway, this game, I've noticed, is compatible with pretty much any modern phone or tablet. Except the Nexus 7. Oh, my, I wonder how that little oversight could ever have occurred, Amazon? It's particularly odd since every other Lemon Team game is Nexus 7-compatible.

Update: The Play Store page now says the Nexus 7 is compatible, and that compatibility wasn't available immediately because of a "minor hiccup." OK, never mind all that then.

Anyway, you can pick it up on the Play Store or the Amazon Appstore right now for free.

Amazon had a second announcement today, as well, with the release of its Cloud Drive Photos app for Android. It does exactly what you'd guess: stores your photos in Amazon Cloud Drive. You get 5GB of free storage, and the app contains a photo viewer that allows you to re-download the pictures to your device, should choose. If you're looking for yet another cloud-based photo storage option, I guess 5GB for free ain't bad. Head over to the Play Store or Amazon Appstore to grab this one, as well.

Details Leak For The Sprint Flash - A Mid-Range Phone With A 12MP Camera, Launching Nov 11 For ...