French developer Gameloft has a complicated and contentious history with Android. Initially the company refused to put its games on Android, then only offered them through its own store before finally getting into the Play Store. Like other devs, Gameloft has started pushing in-app purchases pretty hard, but the games are usually quite high-quality. In this game, you play as a stuntman fighting off the zombie invasion through a number of film sets. The zombie apocalypse trope is nothing new, but can Gameloft at least do it justice? Let's find out.

Zombiewood is a top down shoot 'em up, so the use of our old friend, the dual analog sticks, should come as no surprise. What I do find a little surprising is that they are stationary on the screen. Many games will place the left and right sticks wherever your thumbs come down, but that's not the case here. The left analog stick controls your movement, and the right aims and fires your weapon. 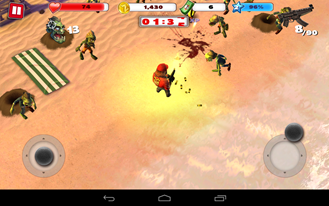 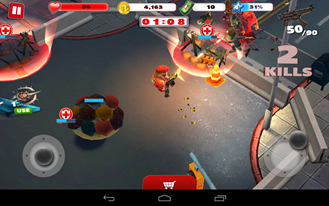 Because the thumbsticks don't move, I found that I occasionally missed one or the other. It takes a few seconds of a zombie munching on your character's head before you realize that you're just not on the button. That said, the control was very responsive. The stunt man does seem to walk a little slowly, but you can fix that with your wallet. More on that later.

You also have access to a number of cool special weapons and items for when things get really hairy. These are displayed as buttons around the periphery of the screen. If you have the equipped item in inventory, it's activated immediately. If not, the game charges you on the spot from your accrued currency to pay for it. Yeah, it's a little sneaky.

This game is broken up into levels, or movies in the context of the story. Each stage is a scene from the movie. Each scene has a main objective like surviving for a certain amount of time, retrieving a particular item, or saving a person from zombie dismemberment. Essentially, you're acting out action movie plots. I like this approach – it feels clever and fresh. It also ensures that the environment changes from time to time.

Each scene comes with a number of objectives to complete that are secondary to the goal. You might have to finish in a certain time, find a hidden trophy, or kill some huge number of zombies. Each objective that's completed gets you a golden reel that is needed to unlock upcoming levels. This too is a good gameplay mechanic that adds some replay value. There is, however, a darker side to Zombiewood that becomes apparent here – some objectives are basically a money grab.

Here's the deal: you collect coins from completing stages and killing zombies, and you can use those to buy some upgrades. Better guns, stat improvements, and special items – that kind of stuff. Some of the objectives in a scene might be 'use weapon x' to take on the undead. If you don't have it, here's a link to buy it. Oh, not enough money? Make an in-app purchase. Zombiewood really smacks you in the face at every opportunity in order to remind you that you can buy more gear with real money.

Zombiewood uses a dual in-game economy. Coins are plentiful, but the good upgrades are bought with Z-cash, which you get only in dribs and drabs. If you want more, you have to buy it. The items are also very expensive. Some mid and upper level guns cost the equivalent of $5-10 (or more) to unlock. Five American dollars for one gun. Sadly, these are the cool, over-the-top weapons that are really fun to use. To Gameloft's credit, this is not a pay to play scenario. You can grind out resources in arena play, but it's a long slog. There's also a slot machine where you can win some Z-cash.

I'm impressed with the graphics in Zombiewood. All the character models are crisp and well designed. It looks like a 3D animated cartoon with exaggerated character proportions and over-the-top movements. I am seeing a little aliasing on buildings and other objects, but it's not very noticeable while playing. 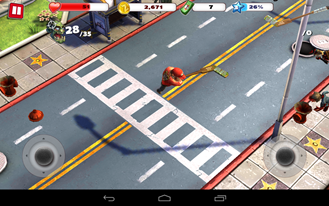 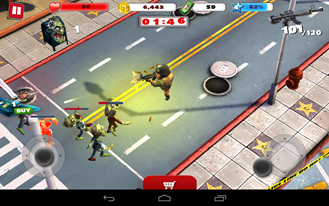 Frame rates have been very good most of the time while playing on the Nexus 7. The only slowdowns I'm seeing are when a fairly obscene number of zombies are on the screen. Even then, it's still playable.

Zombiewood is a very enjoyable game to play, at least on the surface. The graphics are solid, controls are good (not great), and mowing down the undead is a satisfying experience. If this title were designed without in-app purchases, I'd be floored. As it is now, most users won't want to spend an open-ended amount of money to enjoy the experience. I just feel like content in Zombiewood is going to be more expensive than similar titles. 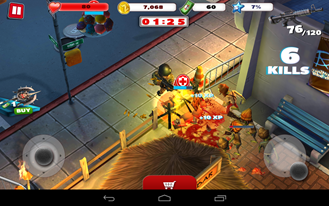 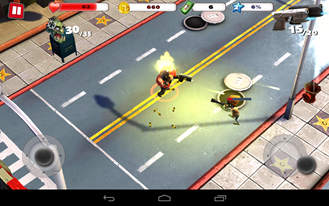 You can play Zombiewood for free, and you should give it a shot. It can keep you occupied for a while, and the more patient gamers can grind along without spending very much.