As part of the unveiling of Android 4.2 yesterday, Google introduced a brand-new input method on the stock Android keyboard called "Gesture Typing." Basically, it's Swype. If you don't know what Swype is, check out this video. Basically, you drag your finger to type instead of tapping. Here's Google's version in action:

While I'm not a fan of the Swype-style typing, a lot of people do seem to love it, and it's cool that Google is now providing a tertiary input method (alongside normal typing and voice typing) on the stock keyboard. It integrates seamlessly, too. There's nothing to turn on, nothing to toggle - it just works. 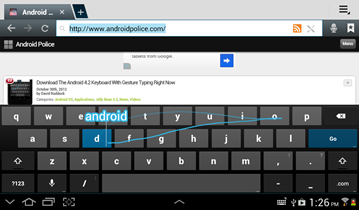 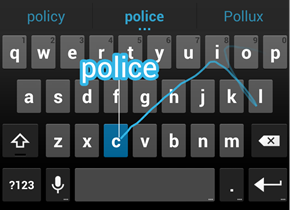 Now, getting it on your device is going to be easy for some of you, and less easy for others. You'll need to be on Android 4.0+, to start.

If you're on a phone with a UI overlay that has the stock keyboard disabled (eg, Samsung TouchWiz, HTC Sense, Sony), you can just download the apk below- no root required. To install, make sure you have "install from unknown sources" enabled in your phone settings, and after installation, go into your phone's keyboard settings and enable "Android keyboard." Then, you can switch to the new keyboard. This may also work on some "stock" Android custom ROMs - but it will not work on stock Android builds distributed by Google. For instructions for Nexus devices running stock software, see the next paragraph.

Update 10/30/12 3:43PM: Google asked us to take down the mirrors, and we have complied with their request. They don't like it when unfinished software floats to the public, which is an understandable concern.

If the apk doesn't work, you're running a phone that is either A.) running stock Android (as in, AOSP), or B.) running software that has the stock Android keyboard as an option, you'll need to download this ZIP file, and flash it in recovery. That also means you're going to need root. as you'll be writing to /system/apps. Before you do, though, either back up the stock keyboard (if you don't know how, you probably shouldn't be doing this) or create a full image backup, just in case. Here's that ZIP file:

Note: this build is an older one, and is not representative of exactly how the keyboard will look when Android 4.2 is officially released. The word suggestion pop-ups, for example, are different from what we've seen on Nexus 4s running the release build of Android 4.2. All the functionality is there and works properly, though.

[New Game] Zombie Driver THD Has Zombies And Driving, But Only For Nvidia Tegra [UPDATED]