At ARM TechCon today, the titular purveyor of semiconductors announced its Cortex-A50 series, dubbed "the world's most energy-efficient 64-bit processors." Based on the ARMv8 architecture, the line will launch with the Cortex-A53 and A57 processors, allowing not only for significantly more energy-efficient processing, but SoC scalability that makes the line applicable to devices from smartphones to high-performance servers. The A57 is geared toward high-performance, while the A53 is lauded by ARM as its most power-efficient. Both chips also support 32-bit and 64-bit ARM code, and according to ARM, the A53 can live up to the performance of the Cortex A9 at 60% the die area. 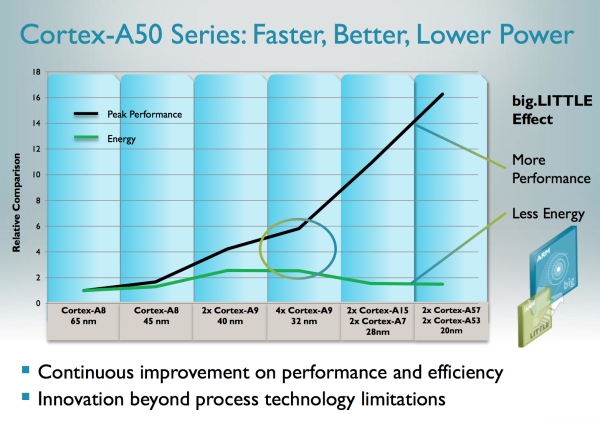 According to AnandTech, both the A57 and A53 can be used on their own, or in ARM's big.LITTLE configuration in which big, powerful cores are grouped with lower performance cores on a single chip. This is the most likely configuration we'd see the cores take in a mobile application (though the A57 on its own can run in a server environment on up to 16 cores).

Using a chip with two A57s in tandem with two A53s for example, a device's OS could switch between the cores and groupings depending on what the device is doing. The A57s would theoretically step up to the plate during high-performance gaming and web browsing, while basic actions like UI navigation would fall back on the A53s. As Anandtech Notes, this four-core setup would actually be classified as a dual-core processor. The configuration is similar to NVIDIA's approach with the Tegra 3 set. 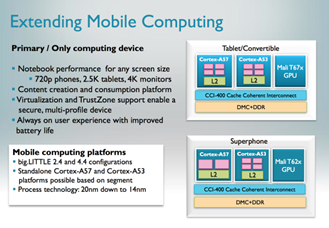 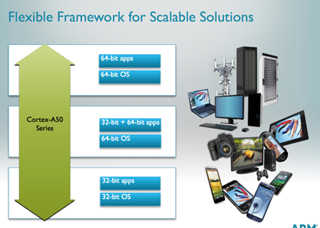 So far, Cortex-A50 licensees include such notable names as AMD and Samsung, and all licensees can expect to start getting completed designs by the middle of next year with actual production to follow by late 2013. The first designs will of course shave nanometers off the previous line, set to ring in at 28nm and 20nm, with a trajectory for thinner goals.

Of course, we're a long way off from seeing the Cortex-A50 line integrated with our handsets, but these chips promise to – as always – push our mobile toys to be thinner, faster, and more energy efficient. We'll keep you up to date on further developments. In the meantime, get your fill of information on the subject from the links below.