We've known it was coming for a while, but Google finally made the 32GB version of the Nexus 7 available. Like we expected, the company has done away with the 8GB variant and dropped the price point of the 16GB version accordingly, so the 16 is now $199 and the 32 will set you back $250. Not bad at all. 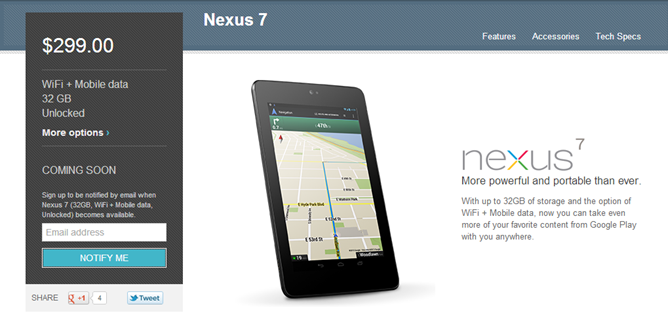 For those on the go, however, El Goog also intro'd a version with on-board 3G. It's using HSPA+ and is compatible with over 200 carriers worldwide, including AT&T here in the U.S. The 3G-equipped N7 comes only with 32GB of storage and will cost $299.

Both new versions of the N7 will be available directly from the Play Store beginning on November 13th. Yay!

Google Partners With Warner Music Group For Play Music, Promises To Bring The Service (With ...