Viva Media has just launched its award-winning Crazy Machines Golden Gears to the Play Store (with expected Tegra Zone availability), looking to bring the Rube Goldberg-inspired dreams of a mad scientist to your mobile device while challenging players to use boards, boxing gloves, laser beams, and dynamite to achieve various goals in each level.

For now, the game features only its "Challenges" gameplay mode, which will take players through a series of levels each with their own end goal, but a "Create – Share" mode is promised to be "coming soon."

It's up to player to use various tools to accomplish those goals, but the levels get progressively harder as the game continues. It's worth noting up front that "unlocking" additional levels costs in-game currency, aptly referred to as "golden gears." These can be earned in game, but a $2.99 pack of 50,000 gears "should be enough to allow average puzzle-solvers to play through the entire game." The in-game purchase will also disable ads.

The levels themselves are impressive (especially in the Tegra-optimized game that will be found in NVIDIA's Tegra Zone), and there are tons of parts you'll need to learn about – from conveyor belts to pinballs, ramps, switches, and timers – to succeed. Once a reaction starts, players can watch their contraptions work, zooming and panning to catch all the action. 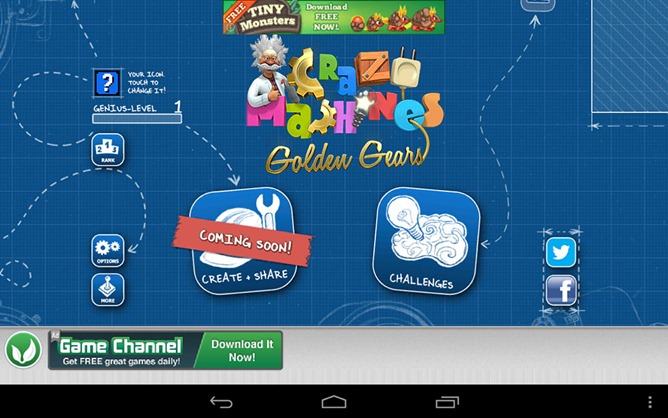 At the end of each level, your puzzle-solving acumen will be rated on a familiar three-star scale, with golden gears awarded accordingly, and the option to move on to the next level or replay the last will be presented.

If you're a fan of fun, casual puzzlers, Crazy Machines is definitely worth checking out - it's well-built, entertaining, and free to download. Just hit the widget below, or keep an eye on the game's Tegra Zone listing.

(Note: as with most new releases, Play Store availability will probably fluctuate for a while.)