FIFA may be the undisputed king of football games on the console, but when it comes to mobile gaming, it's a totally different ball game.

Gameloft will be hoping that Real Football 2013 (also known as "Real Soccer 2013" in the U.S. store) can take advantage of FIFA 13's delayed arrival to the Play store this year, and amass as many downloads as possible, but how does it compare to its rivals?

When you launch Real Football for the first time, you can choose to take control of a club from a number of leagues across the world. Pro Evolution Soccer fans will no doubt be glad to see the return of teams such as 'Man Red', as Gameloft hasn't acquired the rights to the names of most of the teams available. This certainly sets the tone for the rest of the game, which has an extremely casual feel about it.

There's only one game mode available to you in Real Football, in which you take control of a club and guide them through a season, in a similar fashion to career mode on FIFA. Unfortunately, you can't just dive into a friendly game to take on the CPU or your friends. Always one for a challenge, I chose to take control of Blackpool to begin my career - you can select teams from the first two tiers of English football - and was immediately given the chance to make serious improvements to my side, by signing none other than Neymar for free... It's quite apparent that realism isn't high up on Gameloft's list of priorities. 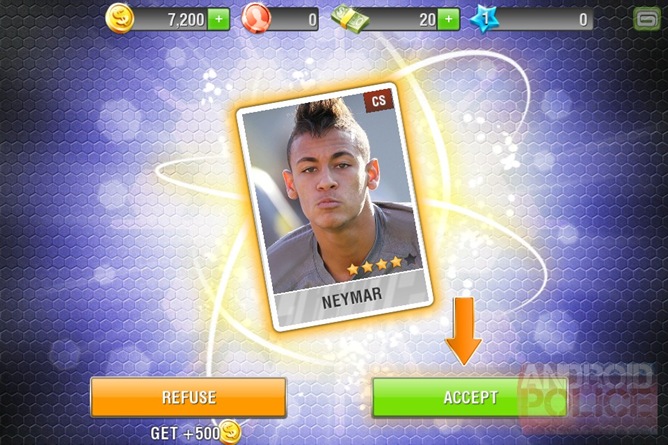 In a similar fashion to the old LMA Manager games on PlayStation, Real Football goes beyond matches, allowing you to control every aspect of the club that you choose when you launch the game. You can upgrade everything from your stadium to the club spa, but as Real Football is a freemium game, this all costs money. Real money.

The freemium model may be popular on Android, to provide a steady stream of income after a game has been downloaded, and to combat piracy, but unfortunately, it makes Real Football a lot less enjoyable than it could be.

If you're taking the whole club management thing seriously, you'll want to make sure that you have adequate training facilities, a good hospital, and an attractive spa. Yes, a spa can actually help your players avoid injury. 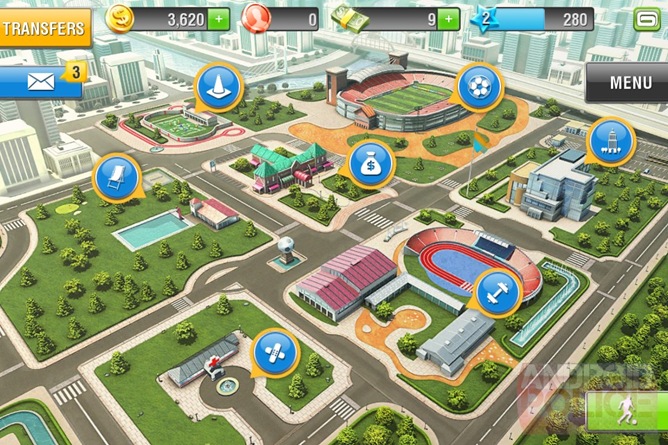 So, you want to upgrade your hospital to level 3. Great, that'll be 15 coins please. Don't have enough money? Great, you can buy more using your hard earned, real money. These upgrades don't come cheap either; 1300 coins will put you back 70 quid! For that amount of money, I can buy FIFA 13 on the PS3 and pick up 24 beers to go with it. Even the smaller purchase of a "fistful of cash" (20 coins) will cost you £1.49.

Once you've purchased an upgrade, the kick in the teeth comes when you have to wait 3 hours - in real time - until it's completed. Is there anything more annoying? Of course, you can hurry things along a bit, but it'll cost you more money. Basically, Gameloft is squeezing every penny it can out of you through every aspect of the game. Don't get me wrong, I don't mind paying for a game that I'll spend a lot of time on, but by the time you've played a season of Real Football, you may as well have bought a season ticket at your local club.

If you're expecting to admire the beautiful game in all of its glory, then you'll probably be left feeling a little disappointed after a round of Real Football. With the resources available, the game doesn't do a terrible job; graphics are as good as you could expect on a mobile device, but you never feel completely in control of the game using the virtual buttons provided.

Whilst you're in possession of the ball, you can use three buttons in the corner of the screen that allow you to pass, shoot, or sprint. Tapping beyond where your player currently is allows you to do a few tricks, but don't expect a showcase of goodies here, you're limited to a few stepovers. 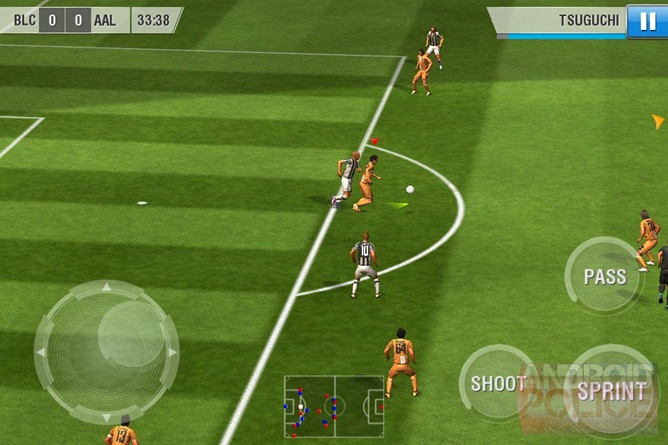 When you don't have the ball, the buttons will re-assign themselves to allow you to press and tackle your opponents. When you're trying to win the ball back, control of individual players seems to shift randomly to the player nearest to the ball. This makes sense, but it also takes a lot of tactical control away from you. What if you want to mark a player in the box before a cross comes in? You can try furiously tapping on the player who you want to control, but it might take a few tries before you're successful, and it only takes a second for the opposition to score a goal.

It always seems like referees are the center of attention after a game of football, and Real Football is no exception. If you do manage to get close to the player on the ball - the 'press' button is really useful in situations such as this - you'll want to close him down and make a tackle. That's all well and good, but doing so without receiving a red card, especially if you tackle from behind, is almost impossible; I'm yet to make it through a game with any more than 9 men on the field. 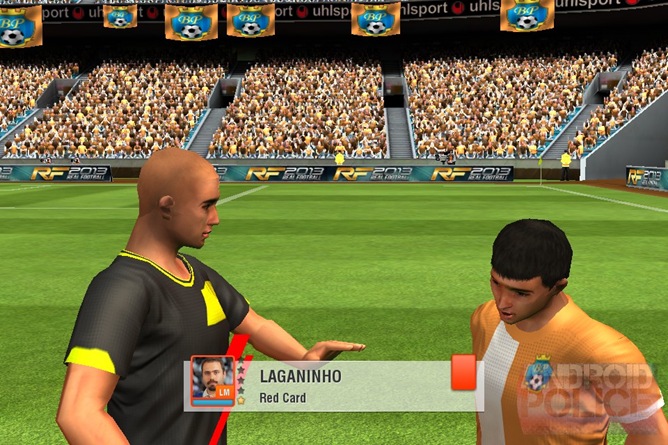 If you'd never watched football before playing this game, you would probably think that it was a non-contact sport. Gone are the days of Roy Keane and Patrick Vieira fighting it out in the middle of the park; Real Football is clearly filled with players like Nani and Luis Suarez who could be floored by a gentle breeze, and halfwit referees who go into their pockets every two minutes. Andy Gray would have a field day with these decisions.

Real Football has the potential to be a lighthearted, fun game for casual football fans, with graphics that are on par with most other sports games on the Play store and the ability to play a season without spending too much money as long as you have the patience of a saint.

However, if you're a big fan of the beautiful game, I'd recommend that you wait until FIFA 13 arrives on the Play store in the next few months. The lack of realism in Real Football will probably begin to get on your nerves - as nice as it is to be handed world class players upon your arrival at your new club - and if you want to get anywhere quickly then you'll have to buy quite a few in-game coins to do so.

Still, the game is available to download from the Play store for free, so if you think that you might enjoy playing around with it, there's no harm in checking it out.