Sidescrolling / top-down space shooters are nothing new - but really good ones are still, like any good game, worth pointing out. I went into Sector Strike, by Clapfoot, with high hopes - they made the now-Android-classic Tank Hero. And while Sector Strike is a pretty good game, odd control choices, repetition, and in-app purchases make this free-to-play title a short and predictable love affair.

Sector Strike plays like almost any other spaceship sidescroller: you shoot enemies continuously with a bunch of lasers and other sci-fi age goodies that come out of the front of your craft like the contents of a psychedelic new year's party popper.

The controls are fine, but for one major flaw: releasing your finger causes your ship to stop shooting. Why? There's no reason for it to stop. All too often I reach the edge of the screen, and die because the touchscreen no longer detects my finger. 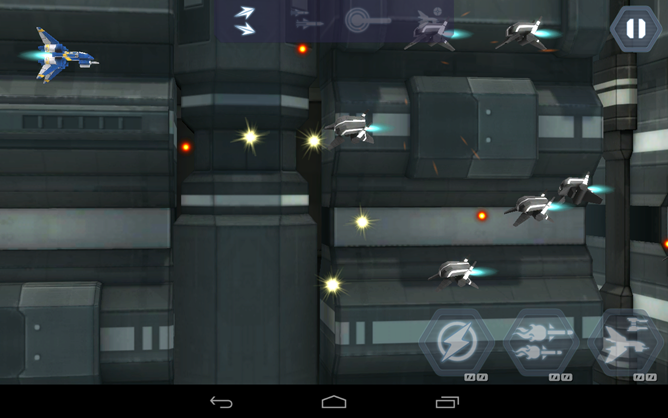 Each level, collecting each upgrade "token" dropped by enemies grants you a new weapon, and getting hit causes you to lose all those weapons. When you have max number of weapons (4 total), though, tokens get you credits (currency) instead of gunnery. Missing out on this by not being maxed hurts you in the long run, because you can't go back and repeat levels, and the number of credits earned per level seems almost random. So, I just usually kill myself if a level hasn't gone well, restart, and try again, since you get to keep your credits even if you die.

You can upgrade your weapons with currency, acquire consumables, and buy passive abilities, the most expensive of which gives you a 10-second invincibility bubble. It costs $10 worth of in-game currency. 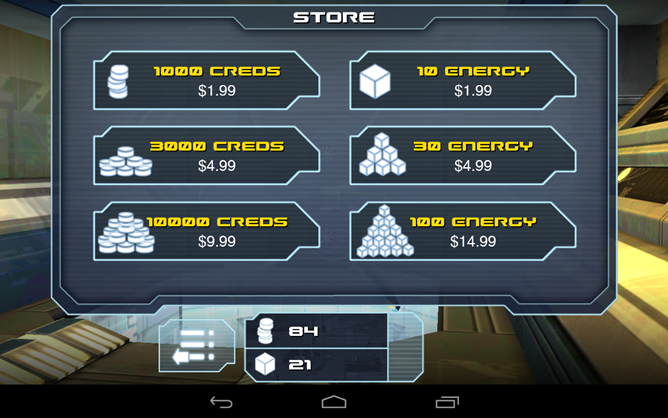 One thing that truly bugged me is that you don't simply get in-game currency by destroying enemies. You have to fly your ship into the occasionally resulting gold balls, which makes monitoring enemy fire yet more confusing, causing you to put yourself in harms' way to make each level count, and simply puts your focus in too many places at once. You end up dying because you cannot mentally track all the dangerous objects on screen with your eyes at once - and that hardly seems fair. I can only imagine how bad it gets in the later levels.

Difficulty ramps up quickly, and purchasing in-app currency is going to be alluring for most casual players pretty fast. Without spending any money, I made it to sector [level] 30 (I think there are about 200 (!) such "sectors") before becoming agitated at the game, which did take a couple hours. And I did - mostly - have fun getting there. Up until the end, when it started to feel more tedious than challenging. As to replay value, well, I can't see any, if you ever actually beat it. 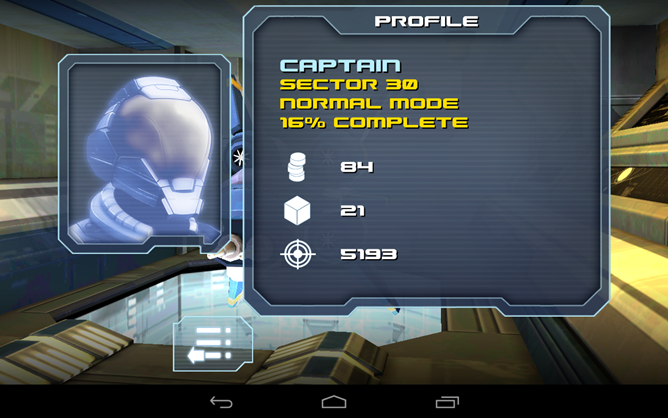 There's no story here, nor does Clapfoot try to make one. You have a rank - that's about as far as the character immersion goes.

The graphics are great. On my Nexus 7, the weapon animations are bright and pleasing, the explosions explosiony, and the sound effects satisfying. It does vibration feedback, too. For a spaceship sidescroller, the level of involvement and visual/auditory satisfaction during the actual gameplay experience is fantastic. I experienced no bugs, either. Hats off to Clapfoot for the technical achievements - especially considering they wrote their own game engine. 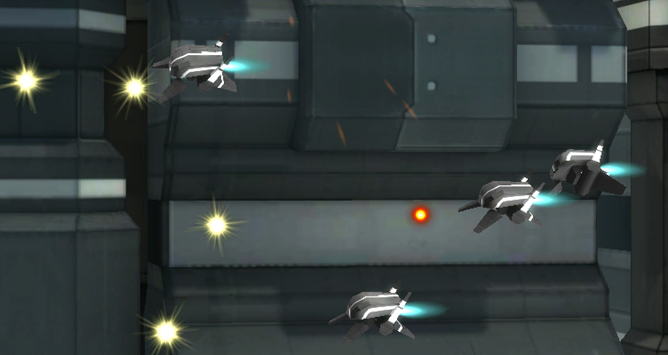 The music is decent - nothing mind-blowing. And, as with most games, I tend to prefer my own soundtrack, or none at all.

Yes. Is it worth trying out to kill 30 minutes, or every once in a while when you're bored? Sure - and that's reason enough to give it a go. Is it going to give you any sort of emotional payoff after 3 hours of playing? Not really. Sector Strike moves you forward with almost no sense of accomplishment (aside from arbitrary "ranks" and a kill count number). At 16% through the game, I'm done - I have no desire to continue playing, and will happily go back to some of my other Nexus 7 gaming mainstays. It's possible I'll pick it up again in the future, but I kind of doubt it - I'm pretty burned out, and hopping back into the game at this difficulty just doesn't sound fun.

Like so many free-to-plays, it's hard to ignore the feeling that it seems like Sector Strike wants to get you on the hook long enough to fork over a few bucks (or more), and then doesn't really care where you go after that. That feeling is made even worse by the fact that there isn't any real goal to work towards in Sector Strike, no great mystery to solve, no competitors to best. It's a pity, considering what a technically impressive game this is.

But alas, this is the direction the mobile gaming industry seems to be going. I just can't say I, as a gamer, will ever feel alright about that. 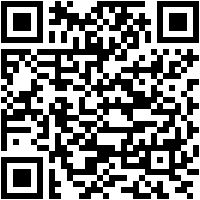 TinyLegends - Crazy Knight Makes Its Way To Android, Begs You To Put The Smack Down On Deformed ...