Despite the fact that tens of thousands of games are available on Android, most of them are easily placed within genres that have been around for decades, or they simply copy the conventions of mobile-friendly games (tower defense, runners, physics games, etc). IT's refreshing to see a game like Sumioni: Demon Arts, which combines traditional platforming with the kind of touch-enabled gameplay mechanics that's only been possible for a few years. It's a shame, then, that it has to come from a PlayStation Vita port... with the high price tag that usually accompanies console games. 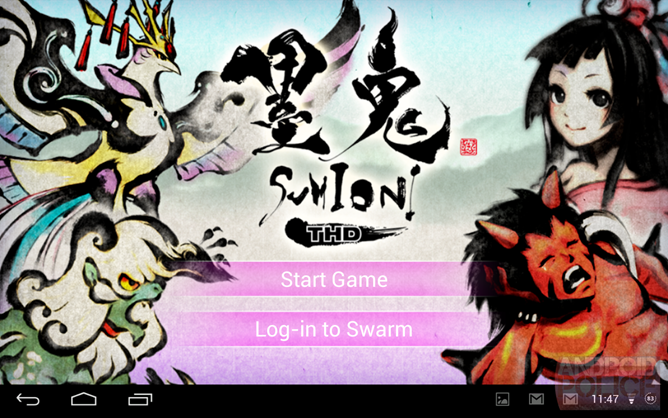 The artistry on display in Sumioni, lifted from Japanese sumi-e paintings (with "oni" meaning "demon" in Japanese, creating a crude quasi-pun in the title), is undeniably attractive. The whole game looks like a watercolor painting, with a 3D protagonist, summoned creatures and enemies running around on a 2D background. The attacks and effects you can unleash are dazzling... if you can master the difficult combination of a virtual d-pad and unconventional "painting" special attacks. Unwieldy controls and a high price make Sumioni a hard recommendation for all but the most hardcore of mobile gamers.

At first, Sumioni seems like a pretty standard platformer: use the d-pad to move around, with a single tap on the empty screen activating you demon's lance attack. It's fairly simple until you need to jump, which requires an up-tap on the d-pad instead of a separate button. The main character's controls are rather floaty; it'll take practice just to time your attacks to hit enemies before you run into them and take damage. Other moves like a dash, dash attack, windmill and hornet special attacks are demonstrated in the tutorial, but nearly impossible to get right in the heat of battle. 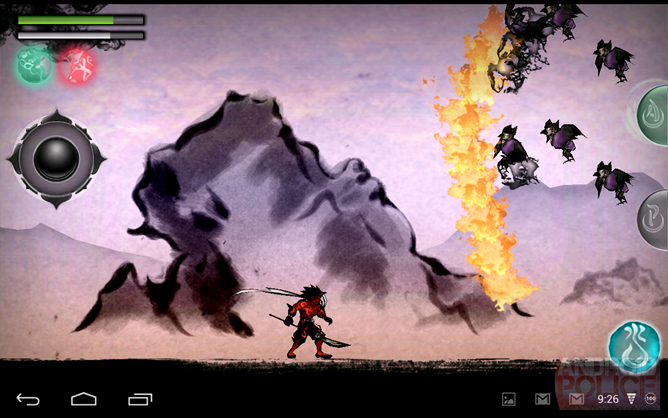 The really interesting stuff comes in with your brush-based attacks. Swipe your finger anywhere on the screen to draw a line with you brush, which you can then run and jump upon. The mechanic lets you literally create your own platforms, though your ink supply isn't unlimited, and they'll start to disappear after a few seconds. Running and jumping on your platforms activates edge mode, where your standard attacks give boosted damage. A Water brush, activated with the lower-right button, erases your ink marks. You can replenish ink with enemy drops, or with a rubbing motion.

The brush mechanic has plenty of modifiers. Open up the Arts screen to pause the game, then draw a line of fire or a lightning-spewing storm cloud. Tap the corner of the arts screen to activate second summoning screen, where you'll trace a simple pattern to activate a gigantic wolf or phoenix helper. These guys can deal out and absorb a massive amount of damage, but their uses are limited, meaning that you need to save them up for the boss battle at the end of every stage. 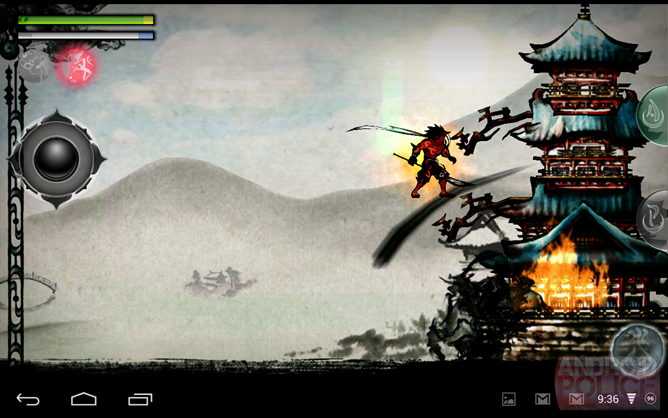 Learning to use all the different brush abilities is difficult, using them in battle even more so. The combination of digital movement controls and complex special attacks means that you're constantly trying to create platforms, make fire walls, summon creatures and execute regular attacks, all while flipping between a double-level menu system. Throw in five or six enemies, environmental obstacles and a boss, and chaos ensues, making the game extremely difficult after just two or three stages. You will die. A lot. I never played Sumioni on the PS Vita, but I imagine that with physical buttons for movement and basic attacks, it's a lot less hectic. 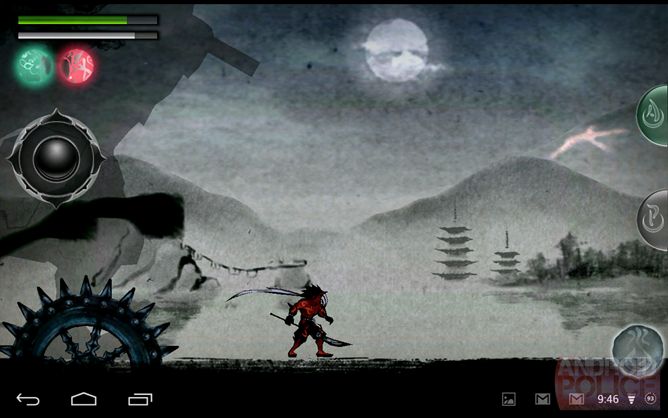 Developer Acquire deserves acclaim for introducing unique gameplay mechanics into one of the oldest gaming genres out there, and specifically for using touchscreen capabilities to the fullest. The brush mechanic is quite flexible, and even works well in the painting theme. That said, they may be pushing it too far - combined with on-screen controls, there's just too much to work with, and the difficulty comes more from navigating the interface than the enemies themselves.

The graphics in Sumioni are stunning. While not overly complex, the combination of sumi-e backgrounds, brush effects and cell-shaded characters and enemies makes for an atmosphere that's unlike anything else on Android right now. The summoned wolf and phoenix beasts are especially captivating; their screen-filling attacks and flowing animations are nearly enough reason to use the game mechanic all by itself. 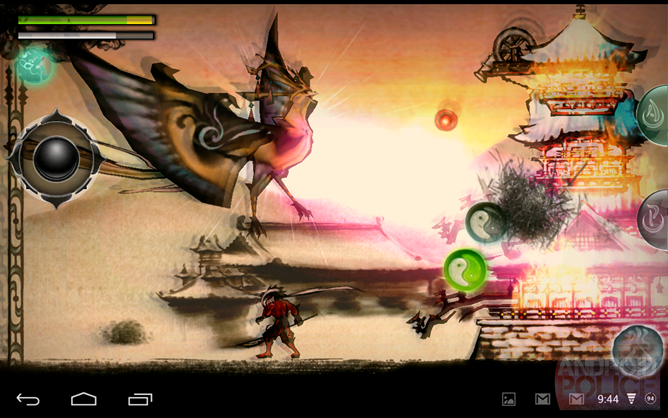 It's the little things that make the biggest impressions. The slight fire effect when you're running on an ink platform, the way that enemies die in a little "puff" of ink blot, and the subtle movements of the characters are all quite appealing. Console gamers will see an instant inspiration from Capcom's sleeper hit Okami, though the vastly different mechanics means it's still unique. There's a story in there somewhere, played out in barely-animated cutscenes, but it's just window dressing.

To see Sumioni in action, take a look at the following video. It's for the Vita version, but aside from the on-screen controls, it looks basically identical on my Nexus 7.

It's just too bad that only Tegra machines are compatible with the "THD" version. There's no indication of when or if it will expand to the larger Android space. That said, you'll need powerful hardware to run Sumioni; while my Nexus 7 handled the game well most of the time, a large group of enemies, ink effects and a summoned creature or boss will give noticeable slowdown even on Nvidia's Tegra 3. I didn't even try on my Galaxy Tab 8.9 (Tegra 2, and technically compatible).

A Fist Full Of Yen

Sumioni Demon Arts costs $12.83 on the U.S. Play Store, making it one of the most expensive games on the Android platform at the moment. Even with a long runtime and great visuals, that makes it a hard recommendation. Most Android gamers will balk at anything above the $6.99 mark, and if you look at the Play Store's most popular paid games, none of the top 100 are more than $10 - even from major publishers like EA, Sega and Gameloft.  Sumioni costs roughly the same as what Square Enix has been charging for its console ports, though to be fair, it's also far less than  the going rate for a PlayStation Vita game. 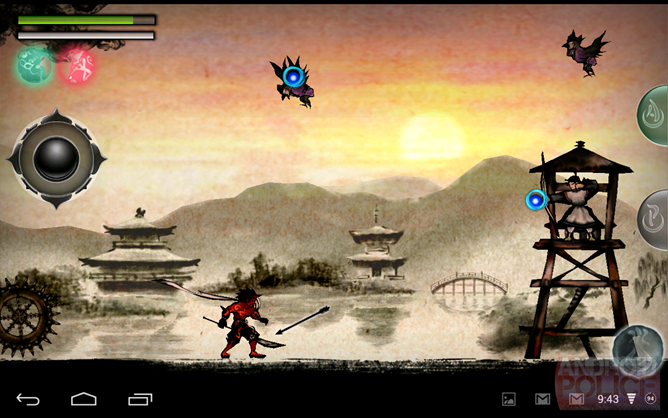 I'm not one to say that all mobile games should be free - quite the opposite, in fact: the proliferation of the "free to play, pay to win" in-app  purchase model is one of the biggest problems in mobile gaming. That said, it's undeniable that mobile gamers expect cheaper games, and it's hard to argue with them, since the smash hits from the last few years have all been free or very cheap. Console publishers need to adopt the lower prices if they hope to achieve success in volume on mobile, and the lower delivery and licensing costs should certainly justify it.

I wanted to love Sumioni, I really did. And with unique mechanics and gorgeous graphics, there's a lot to love. There's plenty of innovation in the games brush-based special attacks, making it one of the most interesting platformers available at the moment. The visuals have so much style and fluid animation that playing the game is like watching a living painting. 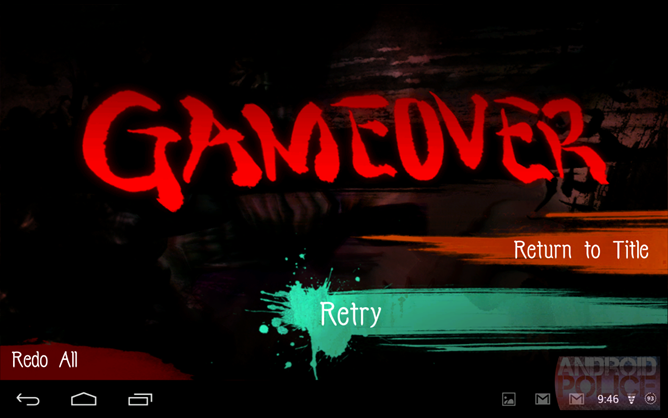 Unfortunately, innovation often stumbles, and such is the case with Sumioni. The biggest problem with the game is its overly complex controls, which make fighting multiple, powerful enemies an exercise in frustration. With a few simple changes (for example, a jump button and a more natural ink refill action) it might be better... which would make the controls merely bad. Combined with a super-high price and limited compatibility, I must regretfully recommend that just about everybody pass on Sumioni Demon Arts.

[Review] Motorola DROID RAZR HD: Far From Perfect, But I Love It Anyway