The claims were rejected on findings of prior art from two sources - an AOL patent, and a patent previously filed by Apple. All of the claims of the '381 patent were either rejected as being anticipated (previously described) by prior art, or being obvious in light of it. Obviousness differs slightly, in that unlike anticipation, not every part of the invention need be described in the prior art - it simply must have been an "obvious next step" to anyone skilled in the art.

For example, a recipe comprising 2 cups flour, 3 eggs, and 1 cup sugar is not the same exact thing as one with 2 cups flour, 3 eggs, and 1.5 cups sugar, and therefore the second recipe is not anticipated by the first one. But the second recipe is an obvious step forward from the original to anyone skilled in the art if it provides some benefit, unless that step is very counterintuitive, or only a highly precise alteration (say, if it were 1.47327 cups of sugar - no more or less) could achieve the result, and this result is unexpected and useful (eg., a magical rubber-banding cake). I won't get too far down this road, but you get the gist, I think.

17 of the '381 patent's claims were deemed invalid as anticipated, while 3 were deemed obvious in light of prior art. But 19 of those claims aren't really important, because Apple has only ever used one of them in litigation (remember - patents are not asserted as infringed, claims in a patent are). Claim 19, which was part of the California Apple v. Samsung lawsuit resulting in a $1 billion verdict, was deemed invalid by both sources of prior art as anticipated. Here's claim 19 from the patent. I've highlighted the relevant portions (Note: "translating" here is best... translated as meaning "scrolling"):

This is pretty jargon-heavy, so let me see if I can break it down. But first, pictures! 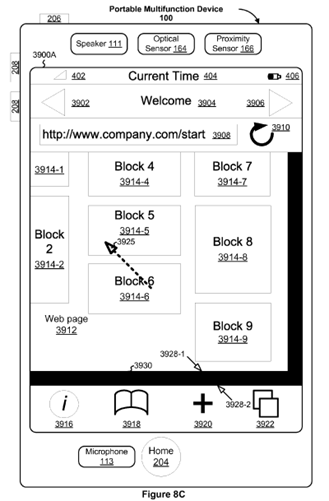 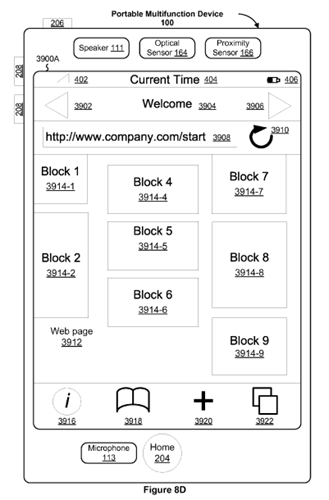 The re-examination communication (here) only discusses the first anticipatory reference explicitly (the AOL "Lira" patent). That patent describes an overscroll bounce in the context of web page elements, where defined elements that are misaligned with the edge of a particular window are "snapped" back into alignment if the user attempts to move the selected content outside of the of the "snap point." Here's the area of the Lira patent that the examiner cites, specifically: 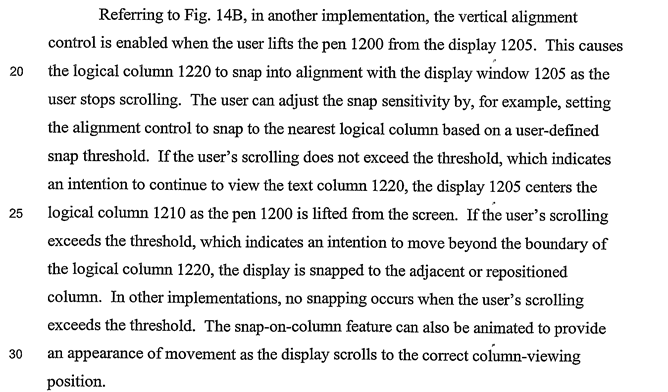 Now, how about we take a look at figure 14B, which these lines explicitly refer to? 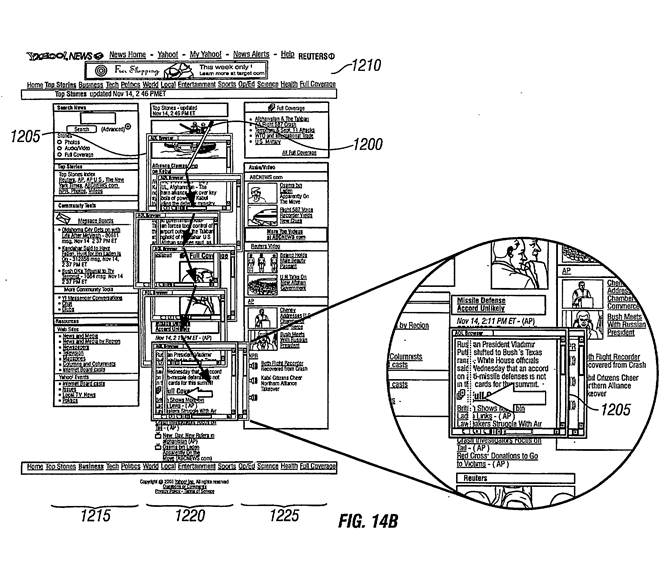 This image is probably pretty confusing at first blush. OK, let's be real: that's the understatement of the year - this drawing is an f'ing catastrophe. Let's see if we can sort it out.

Imagine you're using a really tiny browser window - like the one in the picture. All of the content outside of that window is just the webpage rendered in full, not a larger browser window. So, you're using a stylus on this tiny screen (eg, a smartphone) to scroll down the page, like you would your finger on a touch display (this patent applies to touchscreens, too). As you scroll, your hand naturally strays to the left or right. What the Lira patent does is, once you release the stylus (or, your finger), re-center the webpage on the logical column of content you're most adjacent to - "snapping" the content back into the centered position in the browser window. These columns, labeled 1215, 1220, and 1225, have "thresholds" at which point they will no longer "snap."

So, if you go slightly beyond the edge of column 1220, it bounces back into the centered view. Apple is going to dispute the ever-loving god out of the fact that this patent doesn't have anything to do with the "edge of a document," but that really doesn't matter. As the patent examiner points out, Apple agreed in claim construction hearings for the Apple v. Samsung case that the "edge" of a document could also include the internal edge of a document inside a document (yo dawg), and the fact of the matter is that it would be an inherent part of Lira to have bounceback from beyond the edge of the left or right columns (eg, the edge of the whole web page).

As for the other Apple patent, it's early, and the examiner didn't even talk about it in his communication, so I'm going to leave that to you guys to look at, if you should so desire. Lira is the more important piece of prior art here.

And This All Means... What Again?

Still, I agree with the examiner on this one: Apple's got a dud.

What this doesn't mean, though, is that suddenly the scope of patentable subject matter in relation to software has changed. Nope, this is just the patent office saying "hey, somebody already did this," and that can happen to any patent. While we all may disagree with the fact that this patent could ever be granted in the first place even if it was novel, I think reexamination is going to be the most effective approach for those seeking to have Apple's patent arsenal deflated. While the amount of research required to have a software patent invalidated is often more costly than the filing and even the entire process of invention (particularly here, for something so simple), this can't feel like anything but a slap in the face for Cupertino.

And what about Samsung, the most infamous infringer of this now-tentatively-dead patent? Well, they already filed a notice with Judge Koh, and that may result in a rule 50 overruling of the infringement finding by the jury on this patent, which 23 of Samsung's phones were deemed to infringe. It probably won't reduce the amount of monetary damages Samsung owes by any significant amount, though, as most of those phones also infringed on Apple's iPhone design patent or diluted its trade dress, which allowed recovery of Samsung's profits. Remember, you can't "double dip" on damages if you go after the infringer's profits - Samsung can't pay more than 100% of the profits it made selling infringing phones.

Here are the awards only for utility patents (devices which did not result in design patent infringement or trade dress dilution findings): 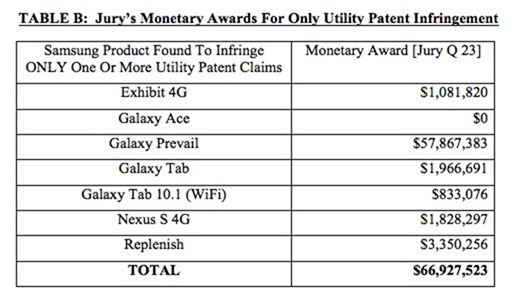 That means, by necessity, Samsung is looking at substantially less than a $67 million shift in the total verdict (let's ballpark and say around $30 million). Here's a nifty chart showing what infringed what over at the Wall Street Journal.

For Samsung, this doesn't really have big monetary implications, then. Really, this is just encouragement to keep dredging up prior art on other Apple software patents, not just for Samsung, but for everyone. You can even help. And as a token of my appreciation for getting through this rather tedious article, here's a rubber band ball. 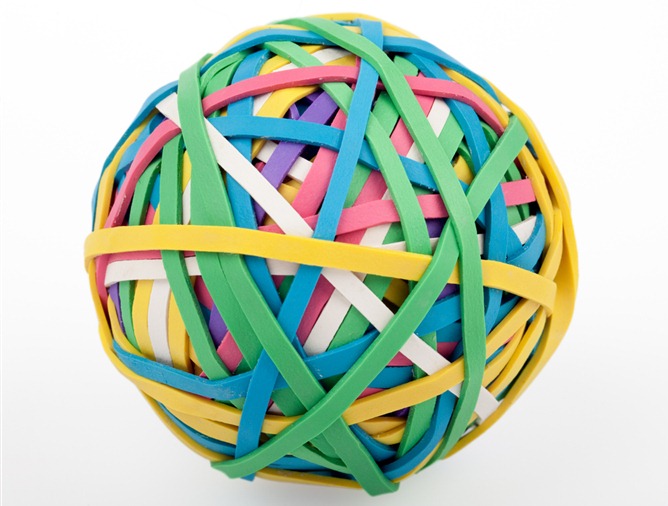 AT&T's Galaxy Note II Will Be Available For Pre-Order Beginning October 25, In Stores On ...

Tip: BeyondPod Podcast Manager Has A Hidden Menu With Tons Of Settings - Here's How To Access It