We're back with yet another edition of our Android 4.2 teardown! We previously showed you the new Gmail, the Quick Settings prototype, and all sorts of security features. Today we're looking at some seriously fun stuff, including a sneak peek at the new Gallery design.

Pending some kind of breakthrough, we'll probably end this series at an even trilogy. There isn't much more to cover after this. And remember, this is a Teardown, not a list of confirmed 4.2 features. None of this is guaranteed to ship in 4.2 and I'm certainly not claiming it will.

Update: HOLD EVERYTHING. It turns out Google didn't make these new icons - these are placeholders too. The Camera icon is from a set called Aelous HD and the Gallery picture was found here. I guess this means they'll replace them with something they've made later? Thanks to Amon Ra for spotting this!

One thing I have actually gotten to work is the Gallery\Camera APK. It has new icons! The left is 4.1; the right is the new set. I always thought the old Camera and Gallery icons were weird. The old camera icon was the 8th-shortest in my UX complaint post, so it's good to see it die. The new Camera icon is much closer in vertical size to everything else. The old Gallery icon never made any sense, so I'm glad it's gone, too.

Combine these with the new calendar icon and the removal of the Latitude shortcut and it sounds like someone over at Android HQ is on icon cleanup duty. 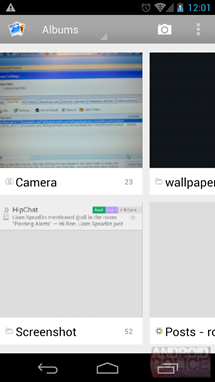 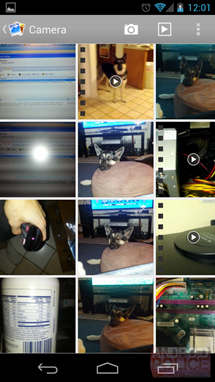 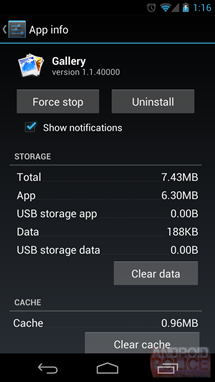 The Gallery is getting a reskin! It's still a rough work in progress, but we can at least see what direction they're going in. Albums have a polaroid-style bottom white label (which matches the new icon!) and the background is a light-gray color. Everything else about the Gallery is exactly the same. And when I say exactly the same I mean exactly the same. You can't delete Picasa/G+ photos, there are no new editing options, you still can't rotate with a gesture, and Instant Upload Albums are still capped at 500. In its defense, it isn't anywhere near finished - in fact, they haven't even incremented the version number. 1.1.40000 is the same as the Jelly Bean version. It's promising that they're looking at it.

Information density has taken a huge nose dive on the album screens, in ICS and JB it would display about 9 albums per screen, now it displays 2 full thumbnails and 2 cut off thumbnails. I'm not sure I like it. If you have a lot of albums, this will suck.

The header looks pretty ugly, and that's because it's the same semi-transparent background as the current Gallery. I think this it's pretty clear what direction they're going in. When this is done, I bet it will look just like the Google+ photo design. Check this out: 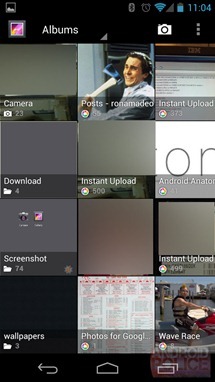 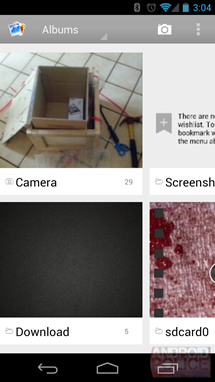 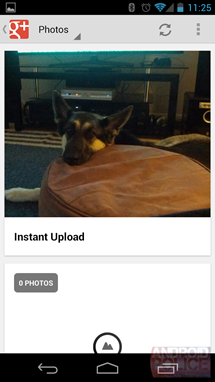 The left picture is the Jelly Bean Gallery, the middle is the work-in-progress 4.2 Gallery, and the right is the Google+ Gallery. That must be what they're aiming for.

This gets major points for consistency. The two main photo apps will look the same, and this design matches core apps, like Gmail and Calendar, very well. There is so much overlap with the Gallery and Google+ I'm starting to wonder why they bother to have separate apps.

The Camera app, by the way, is completely unchanged.

Multiple user accounts have been a well-covered subject here at AP and, given all the stuff I'm finding, it wouldn't surprise me to see them land in Android 4.2. If it's not in Android 4.2, it's certainly very close. There are just so many new things that have to do with access across user accounts.

For starters, some apps have new permissions for dealing with different users. Here are the descriptions of every new permission in the framework-res string file:

In this dump, Phone, Settings, and SystemUI all have some multi-user permissions. Settings obviously needs it to manage users, SystemUI would need it to allow you to switch users, and Phone, well, I guess the phone will still ring when someone else is logged in.

The other really interesting addition is a full set of user account options in the settings APK.

The section will simply be called "Users" and have all the expected stuff. You'll be able to add and delete users, and everyone will have a user name and a Photo ID. The only thing I haven't found yet is a way to switch users. There needs to be some kind of lock screen interface for that.

The Play Store will also keep track of installed apps for each user, so Billy doesn't have to see his little sister's "Barbie Horse Adventure" game in his apps list.

It looks like the multi user feature will also include parental controls!

Yep, this is one of the cool bonuses of multiple user accounts; you can have accounts with reduced privileges. For starters, you'll be able to lock down Play Store purchasing with a PIN number on a per-account basis, and limit account downloads by content rating. You've been able to do this across the device for a while now, but it'll be much handier to have on a per-account basis.

I'm pretty sure there's nothing left to cover in this system dump. We've run into a few other tidbits during our digging, like a Google Music app with a version number bump and no new features, and a few live wallpapers that don't work, but we really can't get much more information about them. Our build is over a month old, which in, Android Development Years, makes it an old man. Plus, with software development, progress is usually much more visible closer to release time.  This gave us a little peek at what Google's working on, but I'm not convinced it's the full picture. I guess we'll just have to wait until October 29th.