If you're not impressed by the leak-happy LG Nexus, and don't buy into the somewhat fuzzy rumors that we'll see multiple Nexus phones this year but you're still seeking a pure Google experience in a gorgeous, powerful frame, Daily Steals has just what you're looking for.

The popular 24-hour sale site is offering the Samsung Galaxy Nexus 16GB, unlocked for GSM networks, for just $319.99. For reference, that's about $30 cheaper than Google's current price, and with a mere $5 shipping charge, it's a fantastic deal. 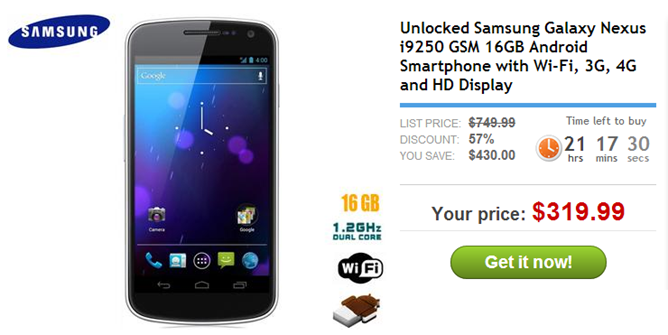 Again, Daily Steals' discounts run on a 24-hour cycle, so if you've been waiting to pull the trigger on a Nexus device but aren't quite as hyped as others about what we're likely to see this year, hit the link below and take advantage of the discount.

Archos GamePad Gets Some Hands-On Time, Shows Off How Button Mapping Works