This game seems to have everything going for it. It has an alien invasion, destroyed cityscapes, big guns, and Tegra optimization. By all rights, Razor Salvation should be a killer game. This title isn't free and it's a big download, so you should know what you're getting into. Let's see if it's worth your time.

The premise of Razor Salvation is epic, but poorly explored. The gist of it is that aliens have invaded Earth, and you have to land your dropship in various locations to save as many humans as possible. As you progress, more of the background regarding the Xenos invasion and the infected human population is revealed. This is all fine, but I wasn't enraptured by the storytelling. 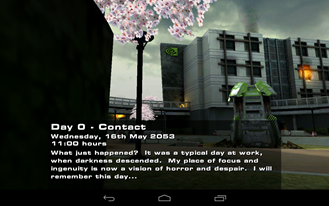 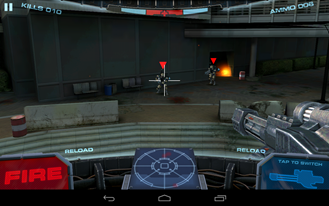 In each level your dropship plops down in the middle of a battlefield filled with broken buildings and obstacles. This is a so-called "beach head" defense game. You are stationary, and targets approach you from all sides. You have to use your pod's extensive weapon systems to hold off the Xenos troops while clearing the way for human survivors to get to you. The more folks you save, the more levels are opened up to you.

Each level continues until you run out of health and have to blast off to avoid certain doom. If you haven't saved enough people to unlock further levels, you're going to have to dive back in after a quick refuel.

Your dropship pod can rotate 360-degrees – just tap and drag to sweep your crosshairs around. This is the first place I found myself frustrated with Razor Salvation. The aiming is very, very rough. I feel like the crosshairs are jumping too much with each movement of my finger. It's incredibly hard to zero in on a target. Adjusting the sensitivity in the settings did nothing to smooth out the controls.

You have a sort of heads-up display on the screen with health, radar and weapons control. The radar is useful for seeing where the closest threats are, but it takes so long to turn your weapon emplacement around. I found myself swiping the screen over and over just to get myself pointed in the right direction. It felt like dialing an old rotary phone, but instead of talking to a person I'm screaming at my tablet.

The fire button works well. All you have to do is push it so Blowfish Studios doesn't get too many points for not messing that up. You can switch between six weapons and two special weapons. The weaker standard weapons have unlimited ammo, but you need to watch your rounds with the others. Opening the weapon swap panel doesn't pause the game, but it really should.

The visuals in Razor Salvation alternate between passable and unacceptably bad. I would be willing to give it a little more credit, but this is supposed to be a Tegra title. The Android community has grown to expect a Tegra game to deliver something that looks great. In this case, the graphics are worse than many non-Tegra titles I've played. 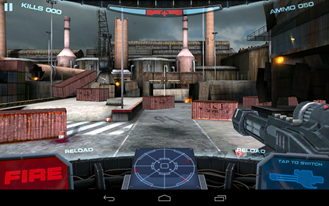 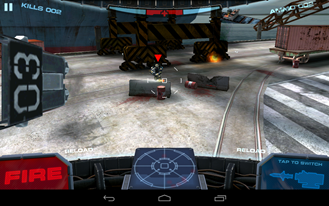 Texture resolution is acceptable in most places, but there is definite blurring on some objects. The alien units look clean and simple, but they move awkwardly. The humans in their radiation suits aren't much better. When you look at the enemy models in the menu, they look fine. During actual gameplay, though, it's not impressive at all.

Alaising is also a big problem. There are jaggies along a lot of edges, and it actually makes it hard to pick out distant enemies. The developer is calling this "console level" graphics. I'm not sure what console they're referring to. Maybe the PS1?

You are awarded with cash when you rescue humans in Razor Salvation, and you're going to use it to buy more ammo and upgrades for your weapons. You are also given metals for accomplishing various objectives. The metals can be used for cosmetic changes. If you don't have enough cash or metals for an upgrade, you can make an in-app purchase of metals. Either spend the metals, or turn them into cash.

I consider this a fairly abusive use of in-app billing. You not only have to buy upgrades, but the game forces you to keep stocking up on ammo to continue playing. Sure, you can grind through with the low-level weapons to find cash, but Razor Salvation is already aggravating enough as it is. This game costs $2 up front, and it does not warrant spending anything through in-app purchases.

Sometimes a game is just a miss, and Razor Salvation is definitely one of those. The graphics are mediocre, the story is uninteresting, and the controls are a complete disaster. I had absolutely zero fun playing it and can't recommend you buy it. Sprint Announces The Optimus G Will Be Available On Nov. 11th For $199, Pre-Orders Start Nov. 1st