Residents of the great white north have a special treat coming up soon. The Galaxy Note II is coming to Mobilicity the day before Halloween. If you know you're going to want it on day one, though, you can sign up for a pre-order right now and get $50 off. Unfortunately, the ad doesn't specify just what price you'll get $50 off of. 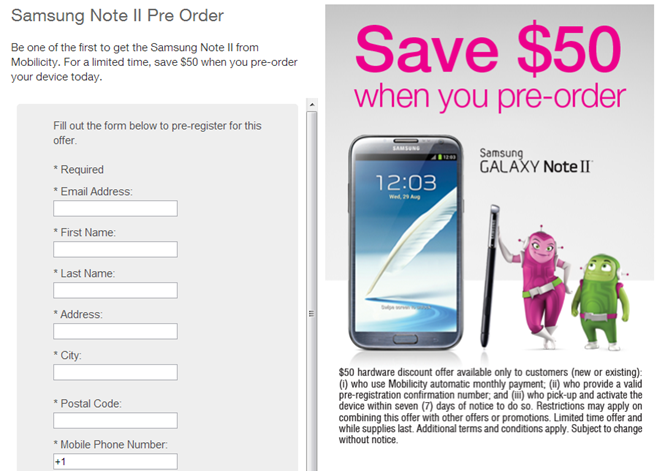 One tipster sent in an email that he received after placing his order. The email seemed to have an additional stipulation that you must be one of the first 1,000 people to purchase and activate your phone. If there are more than 1,000 pre-orders, it's unclear if everyone will receive the $50 credit. It's also required that you sign up for automatic monthly payments to qualify. Here are the relevant parts of the confirmation email:

Thank you! We have received your pre-order registration request for the Samsung Galaxy Note™ II smartphone at Mobilicity. You are on the list of consumers eligible to be the first Canadians to get this smartphone when it launches in Canada on October 30, 2012!

Either way, at least now we know when Samsung's biggest flagship phone will land. Who's getting one?

Update: But that's not all! Telus will also be launching the Note II on the same day, according to this press release. Other carriers that we know are going to launch the Note II in Canada include WIND, Videotron, and SaskTel. The latter three don't specify a date, but it seems reasonable to assume they will also launch on the 30th.