Gameloft has been releasing high-end games on Android for the last few years, and some of them have been quite good. However, just as many of them have had serious issues that rendered them unplayable for me. Wild Blood will cost you some serious cash up front, but it promises an epic action-adventure story with killer graphics. Does it deliver?

Reading the description for Wild Blood makes a good first impression. The gist of the tale is that King Arthur has gone mad after learning Queen Guinevere has betrayed him with Sir Lancelot (that's you). Along with his sister, Morgana Le Fey, Arthur summons demons to wreak havoc on the kingdom and imprisons Guinevere. You have to save the day, and that means a lot of hacking and slashing. The story is cool, and it informs the nature of the action. However, there's not a lot of substance in the storytelling. This is not Gameloft's strong suit so I can't say I'm really surprised.

Wild Blood is a heavily guided action-adventure game with some RPG elements. Each zone is split into small parts cordoned off with glowing energy barriers. To continue, you have to defeat the monsters that spawn in that area. This might only be one wave or it might be several. After spending some time with this game, I think this is positive. I despise poorly designed levels that make it hard to figure out where you need to go next, and that seems more common in mobile games. Wild Blood doesn't have that problem thanks to the more guided experience. To break up the murdering, you will come across some neat puzzles that open chests filled with gold.

Sprinkled throughout the game are small fountains that are used to save your progress and buy upgrades. You can improve the effectiveness of your weapons, armor, and special attacks with a little gold. I would prefer that the game autosaved more frequently so you could just close it at any time and come back to it, but this is an acceptable system.

There is nothing fancy about the way you control Lancelot in Wild Blood. The game is third person, and you have control of the camera. Just drag anywhere on the right half of the screen to look around. Touching on the left side will pull up a virtual thumbstick that controls Lancelot's movement. 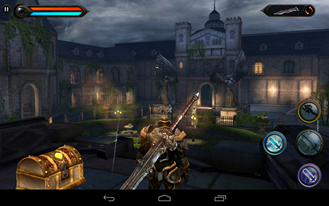 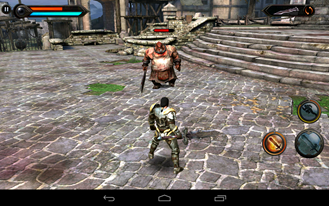 Attacks are handled with a cluster of buttons in the lower right corner. There is a standard attack button that you'll mash to swing the sword, but you can hold it down to execute a charged attack. I'm pleased that this is more than flourish --  there are actually times you have to use charged attacks to break enemy defenses. You can have two special attacks enabled at a time with their own buttons. These recharge fairly fast and do massive damage, but you have to position yourself just right or it's wasted. Dodging is accomplished with the action button in this region as well.

You don't have to aim super-carefully when attacking in Wild Blood. Lancelot will stick to hacking away at a monster as long as you are close. Tweaking the thumbstick can change which target you go for, but you mostly don't have to worry. The only time I was annoyed with the controls was when trying to take out a more distant enemy. Lancelot has a habit of directing attacks toward a closer foe even though I'm explicitly aiming in the other direction.

Wild Blood is a good looking game. Most of the textures are crisp and clear, provided the camera doesn't get to close. Consequently, some of the cut scenes look a little messy. There is some aliasing, but it's hardly noticeable in most situations. The environments are lush with a good amount of detail. It actually feels like you are doing battle in towns and castles, as opposed to a generic battlefield with a few buildings scattered around. The final game size is over 2GB, so it's no surprise it looks good.

Performance is where I have to dock this game some points. When Wild Blood plays well, the animations are smooth and impressive. But there are times when it gets jerky and laggy to an infuriating degree. When that happens, I know I need to find a save point in case the game locks up (which it has several times). I suspect this problem is exacerbated by all the screenshots I'm taking, but there are still some general frame drops when there is a lot of action on screen. I hope Gameloft addresses the lag issues, but your mileage may vary. Not all users are seeing this.

This title will set you back $6.99, which is at the high-end for an Android game. I'm usually pretty forgiving of in-app purchases when a game is free or very cheap, but not when it's this pricey. The IAPs are annoying and a little too prominent in Wild Blood. That said, I don't think you have to pay any additional money to enjoy the game. There is plenty of gold dropped in the game, and there is not an additional currency you need to buy like in some games.

Put simply, Wild Blood is fun. It's not a deep game, but it's great for mindlessly slicing monsters to death while looking good. The download is hefty, but it's worth it. My Nexus 7 does have some performance issues with Wild Blood, but it's not nearly as bad as some users are reporting. If you enjoy this kind of game, Wild Blood is a safe bet.

'LG Nexus 4' Shows Up In Carphone Warehouse's Inventory - Can We Make This Official Already?