It seems like you can't go a day anymore without something new being added to Google+. Today, the mobile app is seeing an update that brings some much-requested features, including the ability to manage Pages from mobile. The method is a little wonky. Unlike on the web version, you can't just hop over to a page you're managing. You have to manually log out then log back in, at which point you will be asked what profile or page you want to control. It's bothersome, but at least it works. 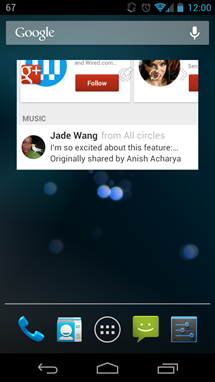 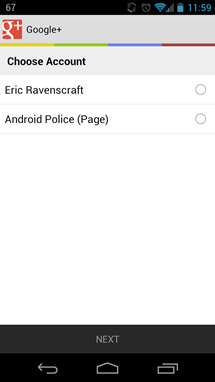 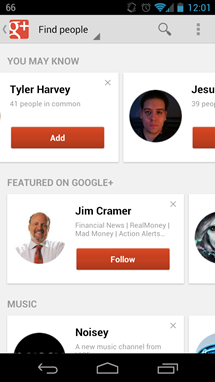 The new app also brings an updated widget that looks a bit nicer than the old one. It does still have the same context-unaware problem that results in odd-looking picture thumbnails. Hey, though! Maybe this one-tap photo thing will make that easier! Well, probably. Maybe. Listed among the new features is the ability to "access photos from posts with 1-click." Nevertheless, I still find it maddeningly difficult to actually get to a photo from my feed. If it was originally shared by someone else, tapping on the photo would take me to my friend's post about it, another tap on the photo would take me to the original post, then a third tap would take me to the photo itself with no obstructions. So, that's still a little weird.

What isn't weird anymore is finding people. What was previously the "Circles" tab, which housed your own circles and a somewhat hidden option to find new people has now been exchanged for a "Find People" button that defaults to suggestions of people you may know, with a search button to locate specific people, whether you have them in your circles or not. Of course, if you want to browse your circles, that's still done within this section, which is not immediately obvious. Either way, it looks like the rearranging has made locating profiles and pages a little more useful for the layperson without removing functionality.

As an added bonus, though not listed on the official release notes, you can now disable Google+ and delete your profile and content. Just head to Settings > About Google+ to find the new button. Be careful before you do, though. It looks like this won't just remove the social network from your phone, but from the Google's servers as well. Make sure you want this.