Sure, the RAZR MAXX HD may be the new hotness of the RAZR family, but if you're looking to get some extra-long battery life on the cheap, Amazon's deal on last year's model may be of interest to you. Today, you can get the RAZR MAXX 4G for $50 on a new two-year contract. If you're an existing customer looking to upgrade, the device will run you $70, which is comparable to prices you'll find at Wirefly. 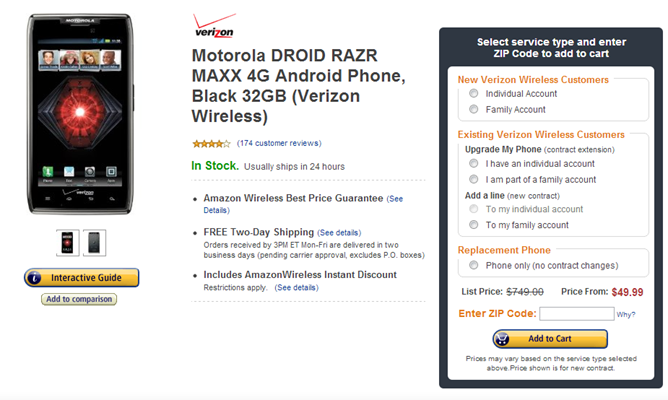 For those who might have forgotten (or can't keep up with which RAZR CAPS is which), here are some of the key specs of the RAZR MAXX 4G:

Certainly not bad for the price. The phone already launches with Ice Cream Sandwich, though according to Motorola's most recent upgrade timetable, there's no word yet on when Jelly Bean might roll out. This, of course, despite the announcement that most 2011 phones and beyond would receive Jelly Bean by the end of 2012. There's not too much time left in this year, so hopefully we'll see that list updated with 4.1 plans sooner rather than later.

Now, if you'll excuse me, I need to go repair my shift key after all this DROID RAZR MAXX 4G talk.