If you have a Galaxy S III on US Cellular, we're here to give you some good news: you're getting Google Wallet. And you can probably actually get it today if you download the update manually from Samsung. First, though, let's take a look at this leaked image showing the changes the update brings: 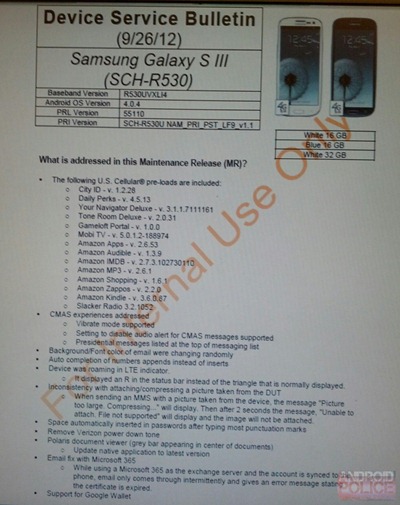 Basically, a lot of updates to stock apps, and various bug fixes you can see detailed in the image above. The real interesting part, though, is at the bottom: Google Wallet support. This is the first US Cellular device to get Google Wallet. In fact, it's the only subsidized smartphone outside of Sprint to be equipped with Google Wallet. We're guessing Google will have some kind of small announcement to make in tandem with this news on its Commerce blog, or the Wallet Twitter account. 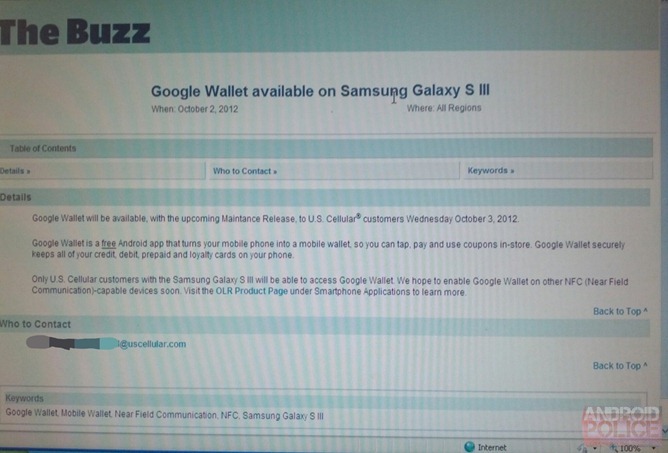 We knew back in August that Google was negotiating with other wireless providers to bring Wallet to Android users, and that the head of Wallet, Robin Dua, hoped to have new partnerships to announce "soon." Today's update to the US Cellular Galaxy S III confirms that was indeed the case. The image above also indicates that we can expect Google Wallet on more US Cellular phones in the future.

Could more Wallet carrier partnerships be coming down the pipe? We'll just have to wait and see.

Oh, and sorry Galaxy S III owners, I sort of hijacked this update post, didn't I? If you want the update (R530UVXLI4), you can try checking the traditional way (Settings -> About Phone), or, you can get directly from Samsung on this page (if the new version is available - we aren't certain it is at the time of this writing). Just download the Simple Upgrade Tool for Windows (make sure you have your Galaxy S III drivers installed!), and run it. The upgrade tool should guide you through the rest - again, assuming the update is available.

US Cellular, and thanks Anon!