Every so often, with all the new device releases, lawsuits, feature scandals, and scathing editorials that fly back and forth across the tech world, it's nice to step back and take a look at the state of the industry from the comforting safe haven of numbers. ComScore's recent round of stats shows an unsurprising yet telling look at the US mobile industry. Predictably, Android remains the top dog with iOS following closely behind. For the period from May to August, gains made by both platforms were much higher than they were between February to May. Obviously summer is a pretty big time to buy smartphones, especially given the late-June launch of the Galaxy S III in the states. 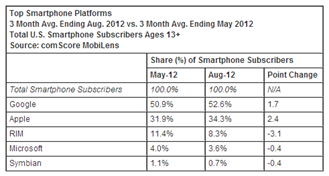 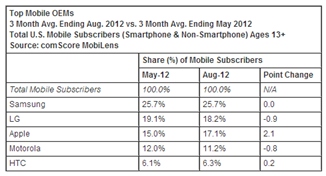 The more interesting part is what comes next. According to ComScore, there are 116.5 million smartphone users in the United States, out of 234 million total mobile subscribers. To save you the math, that leaves 117.5 million for non-smartphone users. We are right at the threshold. In fact, Given that it's already October, it's entirely likely that we've passed the point where smartphone users have become the majority. At that point, the question of who the top manufacturer is will become much more important.

As of right now, Samsung leads the charge. If you notice, Samsung has 25.7% of the entire mobile market (not just smartphones) in the US. This hasn't changed much in a year. In August 2011, that number was 25.3%. Manufacturers are already seeing their dumbphone markets decline, though. Motorola, for example, has lost considerable ground to Apple since last year, and LG has dropped a full 3 points in the overall market. For perspective, 3% of that 234 million is a little over 7 million customers.

Worldwide, we get a glimpse of where the next upset might come from. Android still commands a strong lead with 68.5% of the sales (not total install base, as is the case with ComScore's numbers) in the big five European countries (UK, Germany, Italy, Spain, and France), and iOS has 14%. However, Windows Phone is creeping up. Nokia and Microsoft's partnership has managed to boost growth, if only a little, raising the colored-square OS up to 5% of the same market, which was only 4% a year ago. Not huge growth, but for a fledgling operating system that's still finding it's legs, it's not bad.

It's easy to think that things have stabilized, and for the most part that might even be a little true. Every month, new stats come out that show what we all know: Android is the biggest OS, Samsung is the biggest Android manufacturer, Apple continues to sell a boatload of phones in its little corner of the world, and Microsoft struggles to gain traction. However, it's important to remember we're on the cusp of several important changes. For starters, China is poised to become the largest market for smartphone shipments this year, largely by purchasing cheaper phones. In the US, the dumbphone market is about to become a minority, which will shift how we approach the high-margin, high-end handsets. Plus, there's still time for Microsoft to pull out the stops. With Windows 8 very close to launch, Redmond is poised to leverage the biggest weapon it has in the fight against Android: synergy with the billions of desktops and laptops on the planet. Whether this gambit will be successful or not remains to be seen, but it certainly feels like there's a big shift about to be made. This is still anyone's game.