One of the things that makes Big Win Football different from other football games, besides its Mii-like character style, is the ability to play big impact cards. Big impact cards are essentially in-game powerups with names like "Throwin' Darts," "Iron Curtain," and "Injury Free" that can give you a major edge over your opponent. Players can use up to three of these cards per match, and earn more each time they open a new "pack."

The game is also unique in that actual matches aren't so much played as they are managed. Players, after customizing and perfecting their lineup, are responsible primarily for watching matches and observing where their team needs improvement. 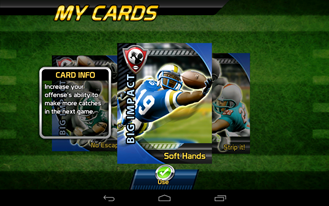 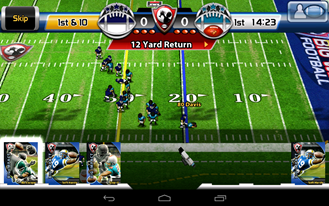 When Hothead says that your team can be customized in Big Win Football, they aren't kidding – players can open packs of players as they progress, and subsequently change just about everything about each team member, right down to hair color and style. Players can also compete in Daily Bowls to earn more card packs, and can earn coins and Big Bucks to do the same just for playing.

While Big Win Football may not be right for fans of more traditional football games, it definitely offers something unique to the sports fan looking for a light, unique gaming experience. Considering that it's free from the Play Store, there's no reason not to give it a shot. Just hit the widget below to grab the download.