I just want to put this on the table: I don't like football. It's not that I don't understand it - I just find it boring. And silly. I tried to get into it once, and that just wasn't happening. But, I also realize that many of you lovely folks do like football. So this is for you. Well, kind of.

The NFL pushed a pretty major update to its "NFL '12" app last night that brings some pretty nice features for anyone who uses the app:

So, what's the problem? You probably can't use it. Out of the 19 devices listed on my Google account, it's only compatible with one. The sad part is, it probably won't really work on that one - it's the AMP1000, which shows as compatible with nearly every app I look at, even when they won't work. It's pretty weird, actually. Similarly, the app is only available on two of Artem's devices, and they're both phones.

To add insult to injury, there are two new features that are supposedly for tablets only. Guess what? Not a single person on the AP team can install this app on a tablet. What the heck, NFL? It's cool to update your apps and all, but if you can't make them compatible with relevant devices, then what's the point? Scumbag NFL. 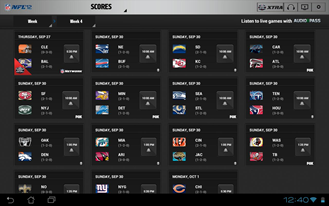 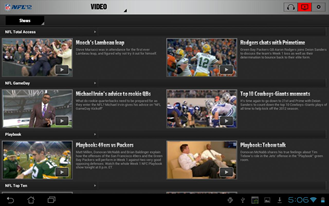 Proof that it can run on *a* tablet, just not *your* tablet.

Apparently, though, someone, somewhere was able to get this at some point or another, because it has a crapton of installs. Maybe if you already have it installed, you can update. If not, whether or not you can get it now is hit or miss.

Kairosoft Announces Beastie Bay - It's Like Pokemon Plus A City Builder, If That Makes Sense

Google Unveils Flight Searches From The Browser For Tablets, And It's Awesome