You may recall the collective scream of horror emitted by the Android community when it was confirmed over the summer that the Verizon model of the Galaxy S III would ship with a locked bootloader. As a consolation, Samsung decided to sell an unlocked "Developer Edition" for full price online. While the regular device has since been cracked, it's a lot cleaner to buy the dev version and now it's on sale. 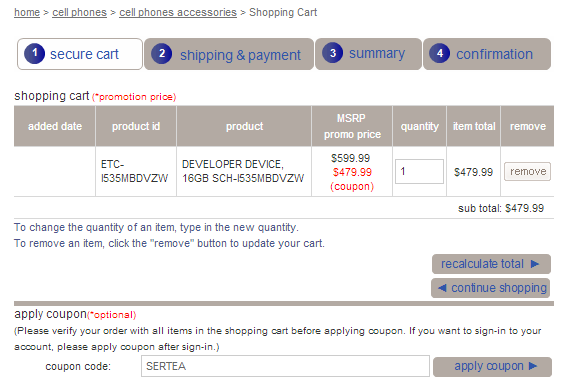 The phone is purchased direct from the Samsung site and is identical in every way to the Verizon-sold edition, except that it has an unlocked bootloader ready for modding. The 16GB device is usually $599, but the coupon code 'sertea' knocks it down to just $479. The 32GB phone is $649 regular price, but it appears to out of stock at this moment. We did see it for sale earlier today so this may be temporary. The same coupon code will work on this model (assuming it comes back in stock), making the final price $519.

It's not clear how long this deal goes, so if you want a developer device cheap, get on it. Just a reminder, this price is without any contract extension or fees from Verizon. Just head into the Verizon store and get your LTE SIM card.

ICS Update For Verizon's Droid Xyboard 8.2 Is Ready To Go, Should Begin Rolling Out Soon

Sierra Trading Post App Lands In The Play Store, Makes It Even Harder To Keep Money In The Bank