It's that time again - rumor time. This one's from our favorite "industry sources" rumor-monger, the venerable Digitimes. They're saying that, according to industry sources, Google is making two new models of the Nexus 7 that are expected to be thinner. Sounds credible.

They're also saying these two new tablets will be priced at $199 and $99, respectively, and will hit the market by the end of 2012.

Listen, we know Digitimes is incredibly hit and miss about this kind of stuff. In fact, we frequently discount a lot of what they publish, because it's usually picture-less, often credited to no-name sources, and littered with conditional language. But these stories are low-hanging fruit, especially when the topic of discussion is anything Apple or Google. 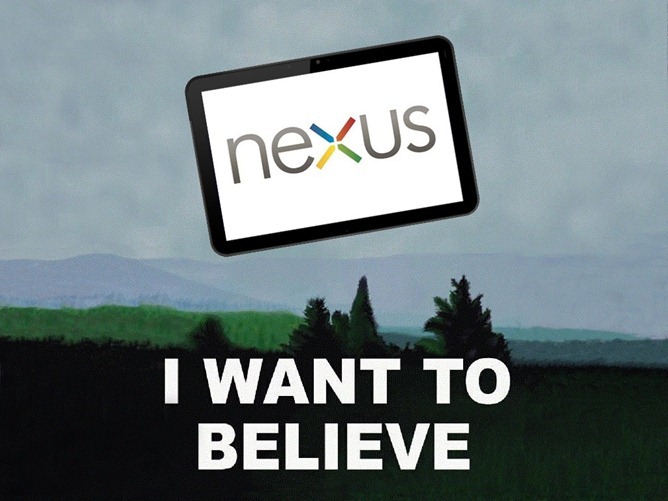 Here's the thing - there are simply too many reasons not to believe this rumor, at least as things stand right now.

First, Google just released the Nexus 7 in July. In fact, Google just introduced the Nexus 7 last week in Japan. They haven't even finished making this thing available internationally. Launching a new version by the end of the year wouldn't make much sense. It would also make it look as though Google wasn't actually ready to make a tablet when it released the original Nexus 7. Like it was a rush job (we know it was, to some degree).

Google has stuck to what has basically been an annual release cycle for Nexus devices. If a Nexus 7 follow-up is indeed in the works, it's incredibly unlikely we'll see it by Christmas.

But what if it's just a slight refresh? This is the angle most people have been choosing to take the story from. Google won't release a new piece of hardware, per se, rather, it will simply be a slight variation on the original. This is possible, but again, doesn't seem all that likely, not at the $99 price point. Now, we have heard rumblings of a 3G-enabled Nexus 7 coming down the pipe. We've seen nothing of it since that story, though.

Would a 3G Nexus 7 make sense? Definitely. I kind of expect it at this point. But would it make sense at $199, or even $99? Probably not. Google simply wouldn't be able to make money on it. In fact, they'd probably lose a lot, enough that post-sale content purchases probably wouldn't even be able to close the gap. But what if it's carrier subsidized? Well, that'd also be pretty unlikely, as all four major US carriers have dropped the subsidized tablet model after finding it didn't do much of anything for revenue. Yes, Amazon has a deal of sorts with AT&T on the Fire HD 8.9 LTE, but the hardware itself is totally unsubsidized at $500. The only thing that's special about it is the plan.

The final argument is "OK, so what if they just made all the components cheaper? Like a lower-end Nexus 7." Let me be frank: that's a horrible idea if there ever was one. The Nexus 7 is already low-endish. It's based on NVIDIA's Kai platform (presumably), which is by its very nature designed to be cheap. I don't want a cheaper tablet than this. Unless some massive advance resulting in cost-cutting during the manufacturing process has occurred, a $99 tablet just isn't going to be very good, knowing where display and processor technology stand right now.

Is this rumor just patently false, then? I wouldn't go that far. There is a remote possibility that Google, unimpressed with sales numbers for the Nexus 7, wants to supercharge its install base during the holidays. It's the sort of crazy idea that only Google would come up with (well, maybe Microsoft, too). They'd have to make up hundreds of millions of dollars lost at the sale if a $99 Nexus 7 came to pass, though. Play Store content purchases would never be enough. How could they do it?

This is my harebrained theory on how a $99 Nexus 7 could work. First, take a page from the Amazon book: sell the lockscreen. Google has a massive ad business - they are an advertising company, after all - put text or display ads on that thing. Or, in-app ads for Gmail and Google Maps. That could make serious cash. The problem with this idea is twofold, though. First, you're ruining the stock Android experience by commercializing it. I just don't think that's a very "Google thing" to do. Second, ads on a lockscreen could just be avoided by installing a custom lockscreen or launcher. Or flashing a non-subsidized Nexus 7 ROM, thereby removing any sponsored content entirely. I just don't see it happening.

The alternative is pulling a Microsoft and bundling paid services with heavily subsidized hardware. A Google Music or TV subscription service? Again, it just seems unlikely. And I doubt a single service would be enough to make up for the lost cash. Google doesn't have an Amazon Prime or an Xbox Live Gold to rely on. In fact, Google has come to live and die on the model of free services for consumers. It wouldn't be something I could see a company like Google doing.

So, take all this stuff with a massive grain of salt (including what I say, because hey, what do I know?). We'll keep our ears to the ground, but we'll definitely be wearing our skepticism hats full-time as the holiday rumor season draws closer.