Cases for my devices fall into two camps: there are cases that are merely "there," and cases that "do." The cases in the first camp usually don't serve any other purpose besides scratch/scuff prevention, and the latter group add some utility, usually in the form of bells and whistles. However useful they are, though, is typically offset by one fact: they usually look like ass.

So when I laid my eyes on a DodoCase for the first time, I had a little bit of an epiphany. This was a case that was functional, durable, and had a minimal style that I gravitated to - it also didn't splay out its logo in huge, ghastly font or make me unwrap it like a Christmas gift in order to get to my tablet. 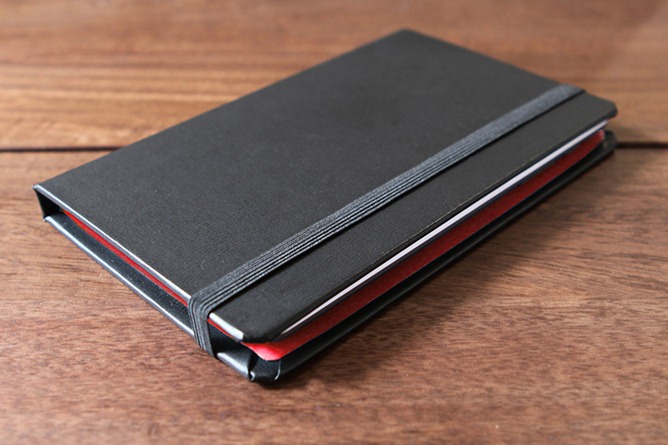 DodoCases are produced in San Francisco under the marketing tag line that they are "saving the art of bookbinding from extinction." They are made with a high-quality material that's very similar to a Moleskine notebook, and that's a connection they're banking on you making. By making the case blend in with the legendary notebook, the company is hoping to send a message: this is high quality stuff, and you're not going to find it in a Best Buy bargain aisle.

And rightfully so - daily use of this thing turned my tablet from a gadget to somewhat of a fashion statement. I opted for the straight "Charcoal" black color, but the inside of the case can be customized with a number of different options.

The general look and feel is the same in each instance, though: this is a lightweight case that you can almost forget is there. It holds itself closed with an attached elastic, and can be customized with embossed gold letters. As any Starbucks addict can tell you, there's an experience here, and you're paying for it.

That experience isn't a bad thing, though. I found myself genuinely enjoying the time spent with the case, as its simplicity is its greatest asset. The cover is sturdy and protective, and I've even been using it to balance a drink on, like a food tray. It doesn't scuff or mark easily, and the general build quality is impressive.

Opening the case allows you to fold the cover around the back, just like any other book, while magnets wake your Nexus 7 from its sleep mode like any other "smart" accessory. You wrap the elastic around again, it you want, keeping it from flapping around and getting in the way. Laying it down in landscape mode gives you a nice angle for viewing the screen and typing without anything to "set up"; if you don't like having to kickstand a case into submission, this may be for you. 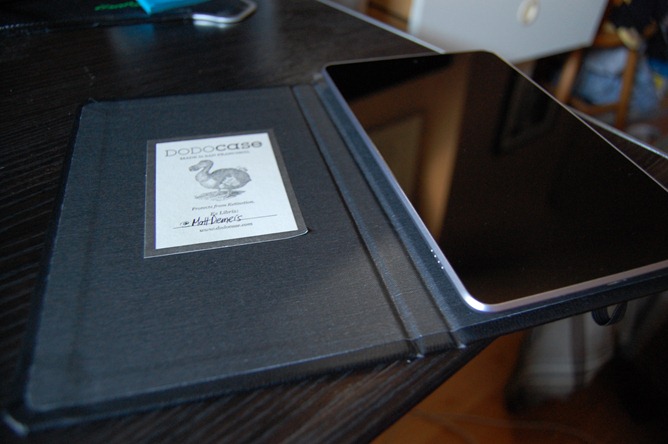 However, standing the DodoCase up to view video may be a bit of a problem; with nothing to keep the spine from just collapsing, you're kind of at the mercy of the surface you're perching it on. A provided plastic clip (see my video) can keep it from moving, but this is a very low-tech solution for the problem. You'd figure that with the luxury you're affording there would be something a little more satisfying to fix the issue.

The other big snag I've hit is the way that the case fastens your tablet. As there is no cradle or dock, you are attaching your Nexus 7 to three adhesive strips, which hold onto it extraordinarily well. The problem comes with removing it later - I'm worried that I'm either going to damage my tablet or tear a chunk out of the case.

The makers of the DodoCase insist that the adhesive does not leave residue, and can be wet with water in order to regain some stickiness. This is indeed true, but the first attempt to remove my Nexus after two weeks literally popped two edges of the back panel off the tablet. This is both a testament to the stickiness of the adhesive and a warning to remove your Nexus 7 as slowly as possible from your DodoCase. I wouldn't want anyone to lose their warranty.

A Question of Style

As I wrap up this review, I want to say that I recommend this case heartily. It does its job well, and most importantly, discretely. I like my cases to not look like cases, not have logos splayed across the back, and actually have some form factor to them - the DodoCase delivers this in spades. However, some users may be disappointed in the relatively Spartan nature of the case - if you're looking for a sturdy perch to watch videos from, or something shock-resistant, you might be left wanting.

I believe the DodoCase isn't trying to be everything to everyone, though. I own their iPad 2 case as well, and find that I've come to respect my tablets a little bit more. They do say to "dress for the job you want," and if that extends to tablets, the DodoCase might be getting a CEO-level promotion in the near future.

The DodoCase HARDCover for Nexus 7 retails for $34.95 USD at DodoCase's site.

A number of people are asking about the wallpaper I used in the video. You can find it on the artist's DeviantArt here.