There's no such thing as too many zombies, right? That seems to have been Glu Mobile's general idea when bringing Call of Duty: Black Ops – Zombies (or CODBOZ) to Android. The game, which itself is based on a spin-off of the original Call of Duty series, puts CoD players in familiar territory with a seemingly endless stream of zombies to eliminate in a game spanning not only multiple environments, but multiple gameplay modes as well.

Once the game dropped Sony exclusivity, I knew I had to give it a shot and see what made this first-person zombie destroyer different from the rest. After taking a while to play and get to know CODBOZ, it only seemed right to give it a full review and decide if the $6.99 slayer is worth the price.

Having never played the original CODBOZ, I wasn't quite sure what to expect from its Android iteration in terms of gameplay. I was pleasantly surprised. I assumed, since the game is a zombie-filled FPS, that I'd be playing Dead Trigger again, but I was (somewhat happily) mistaken. While Dead Trigger focuses on a cohesive narrative built of various missions with varying degrees of difficulty, Zombies relies on a simpler "stay alive and unlock everything" dynamic. This gives the game a somewhat more casual, non-committal feel, making it good for pick-up play and quick time-wasting sessions.

In single-player mode, the game offers players a few maps – a tutorial, Kino der Toten, Ascension, and Call of the Dead: Director's Cut, in addition to an unlockable Dead Ops Arcade mode. Each of these puts players in a new environment, with its own areas to explore and enemies to slay. Players can also choose to blast zombie face as one of four characters, and choose from three difficulty levels.

You can connect with up to three friends for multiplayer co-op play, too, which essentially adds another dimension to the strategy of each map, but also changes a few small things like Quick Revive functionality. 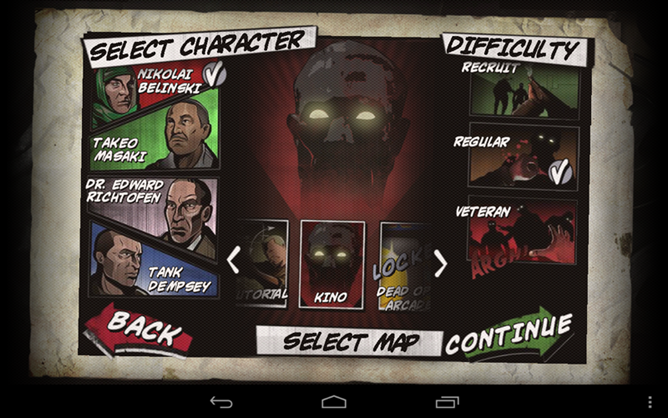 Zombies implements an interesting gameplay dynamic in that maps are not completely open at first play-through. Many doors and passageways require players to spend points in order to be opened, earned by killing zombies, thereby greatly expanding the potential gameplay time. Likewise, things like weapons and "Quick Revives" can be purchased in the midst of the action, giving you what you need to survive uncharted areas.

Players can, of course, purchase in-game currency to help them speed things along, but from my experience purchases aren't totally necessary. That being said, the lowest pack includes 12,000 points for just $0.99, so those wanting to load up quickly don't need to spend a lot of money on top of the game's initial $7 price tag.

BOZ's "Dead Ops Arcade" mode is worth discussing on its own. The unlockable mini-game brings significant value to the overall package, putting players in a totally different scenario – a top-down arcade-style shooter with powerups, treasure, and a never-ending onslaught of zombies across 50 levels. Without spoiling the (admittedly easy) mystery, players need only find four coins hidden in BOZ's various menus. 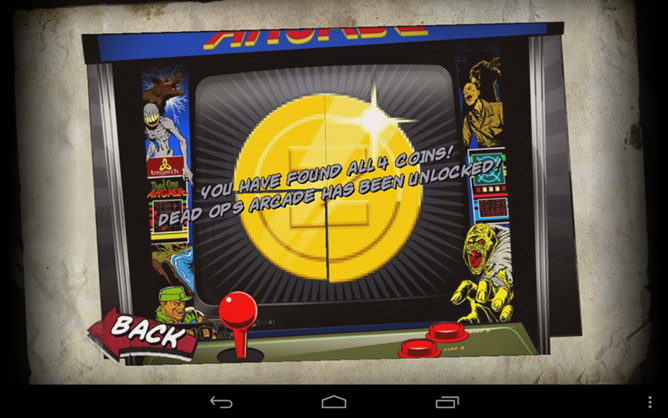 As someone who finds more pleasure in simple game dynamics and the ability to waste time with quick rounds, I am tempted to say that Dead Ops Arcade is as or more fun than the main set of maps. Progressing through each round is simple, wipe out waves of zombies from all directions and pick up powerups, treasures, and other goodies along the way. The arcade mode is extremely easy to unlock, and its being locked at all is probably nothing more than an incentive for players to explore the game's various options and menus. 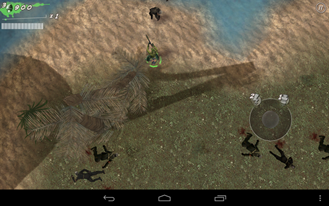 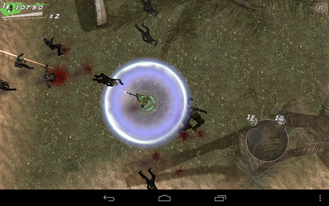 CODBOZ's controls are nearly invisible, but almost completely intuitive. If you've played Dead Trigger, you'll get the hang of Zombies' control scheme pretty quickly. Your left thumb serves as a joystick (and crouch control when necessary), and your right thumb will be in charge of grenades, automatic aiming, weapon switching, and melee. 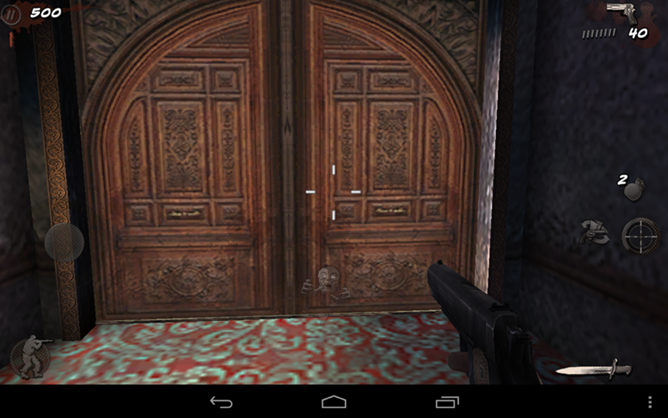 My main complaint with the control scheme is that quick and accurate use of the knife is more difficult than it needs to be – it is too easy to accidentally shoot instead of swipe with your knife. This is a small complaint, but the control layout could always be improved.

How Much Do Polished Graphics Matter?

One area where Call of Duty definitely doesn't stand out is graphics – the game looks okay, maybe even good, but not exactly as good as I would hope, particularly when comparing to other FPS games I've enjoyed on the Nexus 7. The game does offer "level of detail" settings with a simple slider from "Faster" to "Prettier," but – at least on the Nexus 7 – the differences seem marginal. Here's a quick set of comparison shots: 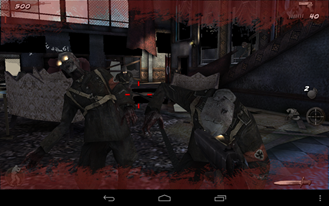 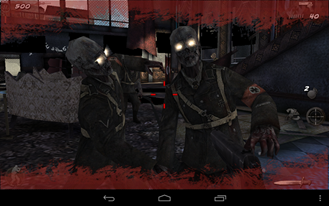 That being said, I think graphics have less of an effect on BOZ's gameplay than they do on the overall dynamic of the game, which again – from my perspective – is very casual and not concerned with highly developed stories or visuals.

So, is Call of Duty: Black Ops Zombies just another zombie shooter? Kind of. The draw that I see to CODBOZ is that it's based on an already popular game. Outside of that, the game's graphics are not great, and the overall gameplay experience is simply different – not better or worse – than the alternatives.

Perhaps the more important question is whether the game is worth its $6.99 price tag. Users are often reluctant to invest so much money in a mobile game. The idea of spending above and beyond that initial purchase price on in-game currency doesn't help. To those looking for a zombie shooter with visual polish, a storyline, and what I consider to be a more "fun" gameplay dynamic, I'd recommend trying more reasonably-priced (free) Dead Trigger. If, on the other hand, you value a casual dynamic and don't care too much about graphics, this may be the first-person zombie shooter for you.

The Case That Isn't There: We Review The DodoCase for Nexus 7