Point-and-click adventure games and I have a little bit of a problem with each other.

No matter how hard I try, I can never really escape the weird cycle of clicking on everything possible in an effort to get something to work instead of methodically assessing my situation and thinking about what works. Perhaps it's part personal fault and part game design, but it really frustrates me when the most efficient way of progressing is just using every item in every possible way - something will eventually click, right?

I think that's what disappointed me a little bit about The Tiny Bang Story - it's essentially a huge "look and find" game on steroids. 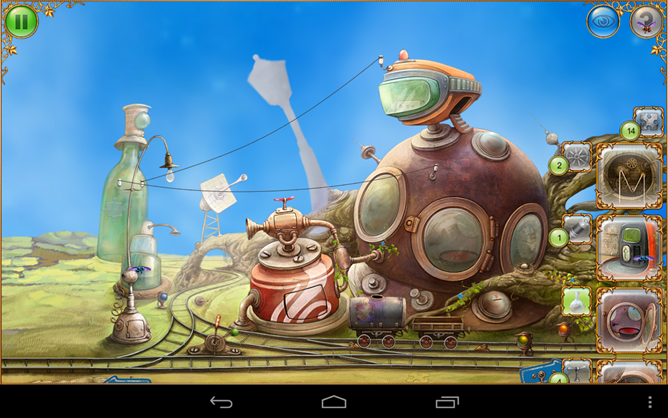 Visually, this game is stunning. Everything has a very hand-painted aesthetic to it, and the developers themselves admit to a heavy steampunk (Machinarium) influence, as well. Everything is meticulously detailed, and you can find yourself zooming in and out to see all the little bits. I played this on a Nexus 7, and I was pleased to see that it took advantage of the extra screen real estate quite nicely.

It's not a very graphically-intensive game: most of the action is just simple animations instead of complex 3D models. You'll find that Tiny Bang Story is simplistic, yet artful - don't expect to be blown away by anything besides what you can see right in front of you.

Which is good, as the game's whole point is for you to look at it. Very hard.

At its core, The Tiny Bang Story expects you to find a lot of things. You are thrown into an environment where you're given a number of objectives, usually to make something work - a steampunk engine needs cogs, or a painting needs pieces of parchment, or a light puzzle needs bulbs to power it. You find these objects by finding them in the levels. For example, one of those lightbulbs might be hiding in a lamp, or that piece of parchment may lie in a book.

You're never quite told why you're doing things, or what you need to do at all. This is a major stepping stone in getting into this game, as sometimes you literally have no idea what is going on. There is no tutorial to guide you, nor is there any text setting up the story. In most cases, you're left to just wildly click on things until they work, and sometimes that's not even enough. 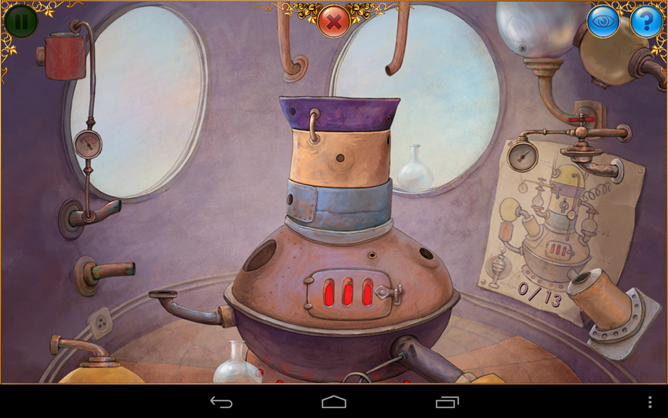 Generously, there is a small hint system that's powered by mosquitos - you'll be able to touch these flying sprites and fill up a meter that will show you the way to the next objective. Sometimes these hints can be hit or miss, as they might just send you to a different screen instead of circling what needs to be found. This leads to you to have to gather enough meter again, which can be an arduous process depending on how patient you are.

That might be a good metaphor for this game as a whole: it's interesting once you get into it, but there are so many barriers to getting to that sweet spot that you may not have the patience to stick around. Once I started assembling things I found myself quite immersed, but hitting a brick wall where I couldn't find any of the objects that I needed to left me to force my way through it. Clicking those damned mosquitoes only to be back at square zero right after isn't a nice feeling, and I can't imagine players feeling any different.

Perhaps it's that "square zero" feeling that keeps me from getting into games like this: there's often so little feeling of progress or reward that the fun soon wanes. The Tiny Bang Story does so little in terms of storyline, explanation, and progression that it feels like you're just going through a large laundry list of crap with no rhyme or reason.

It's a pity, considering the game looks and sounds beautiful. However, execution is as important as aesthetic flair, and I'm not sure I would recommend this to readers whose patience is easily tried.

To an inquisitive player who has time to spare, however, The Tiny Bang Story might just suck you in. At the moment, it's $2.99 on the Google Play Store, and is waiting for you to test your skills. 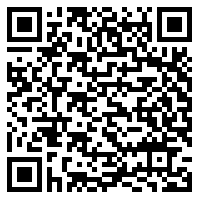