Back at IFA 2012, Logitech unveiled its new series of Ultimate Ears accessories. Among those were a couple of portable speakers: the Boombox and Mobile Boombox. I've spent the last few weeks using both, and have been quite impressed for the most part. Without giving too much away right off the bat, both units sound surprisingly good compared to Logitech's previous Bluetooth speakers (and the competition), and are priced pretty aggressively for the features offered.

The Mobile Boombox is the smaller of the two and is a direct competitor to the Jawbone Jambox. Compared to the Jambox, the Mobile Boombox is both lighter (298g vs. 347g) and more affordable ($99 vs. $199). Don't let this fool you, though - it sounds every bit as good as Jawbone's flagship speaker. Given the JB's age, though, it's not surprising that we're starting to see some real competition for half the price.

The Mobile Boombox feels like a solid little brick in your hands; buttons are responsive and not creaky, the grill is well formed with no flex, and the overall construction is very good. On top of the speaker, you'll find a Bluetooth button with volume up and down controls on either side. The power switch, little-bitty battery indicator light, charging port, and 3.5mm audio-in jack are on the back of the unit, and UE logos adorn both sides. The curved shape give it a very sleek, modern look, unlike the Jambox's squared off corners. The main downside to the MB's design is the rubber coating - it seems to collect dust, dirt, and all other forms of small debris. 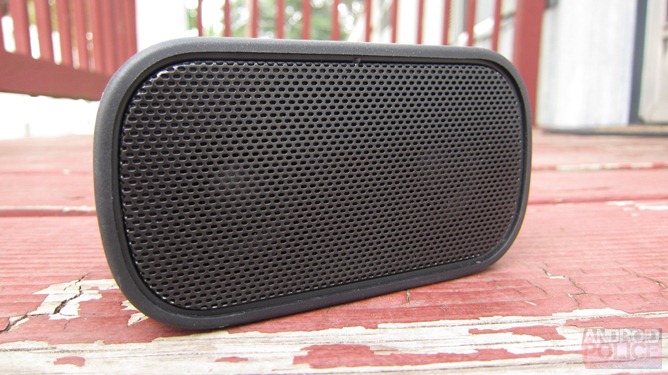 After firing up the MB and getting it paired with my Nexus 7, I immediately started comparing it to the Jambox. With the Jambox's Live Audio feature turned off (which results in louder volumes), the MB easily sounds better, and it gets louder, too. With LA turned on, the Jambox sounds a bit better, but doesn't get nearly as loud. Ultimately, it's difficult - if not impossible - to justify the price difference between the two for an ever so slight bump in audio quality. It's also worth mentioning that, like the Jambox, the MB can be used as a BT speakerphone.

The Mobile Boombox also supports up to eight paired devices, two of which can be connected at the same time. That means you and a friend can take turns kicking out the jams without having to re-connect over and over again. It's pretty sweet.

When it comes to battery life, Logitech promises "up to 10 hours." Of course, that depends on several variables: volume, strength of Bluetooth connection, environmental conditions, etc. Given that, I expected about eight hours of life from the MB. I was wrong. For my tests, I streamed music to the MB from my Nexus 7 in my home office - it didn't just last for one full day of work (roughly nineish hours), but nearly half of the next, as well. I got a total of 12.5 hours of playback before the Mobile Boombox finally kicked the bucket. Color me impressed. 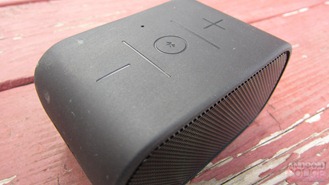 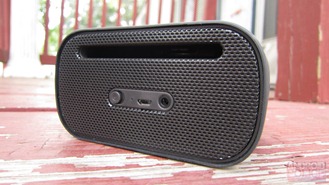 It's not all flowers and butterflies, though - the MB has a few shortcomings. The most annoying thing about it is that it has no low battery warning tone at all. In fact, aside from a small blinking light on the back of the speaker that you'll rarely ever see, there's no way to monitor the battery drain. Since it's missing this feature, the speaker just dies when the battery is depleted.

Similarly, there are no audible notifications when changing the volume. That may seem like a trivial function, but I like to know the button is responding to my press and not have to question "did that just get louder?" Speaking of, I'm convinced that the buttons don't always register presses, but that could just be my particular unit. I sometimes had to hit both volume up or down a few times to notice the difference.

The biggest shortcoming of the MB compared to the Jambox is that the firmware can't be updated though USB. Whereas you can change certain things on Jawbone's offering - like the voice that speaks the battery percent, for example - the MB will always be how it is out of the box. That's far from a deal breaker in my opinion, but I know that sort of customization is important to some people, and thus, worth mentioning.

Update: As it turns out, I was wrong here - the Mobile Boombox is able to accept firmware updates via USB. Since it's only just been released there haven't been any updates for the speaker just yet, but once something is available, you'll be able to plug in and update away. That's awesome!

Overall, I'm really impressed with the Mobile Boombox, especially after having used Logitech's Z515 speaker (which doesn't sound nearly as good and is twice the size). I would easily recommend this over the Jawbone Jambox - it really lives up to the Ultimate Ears name. 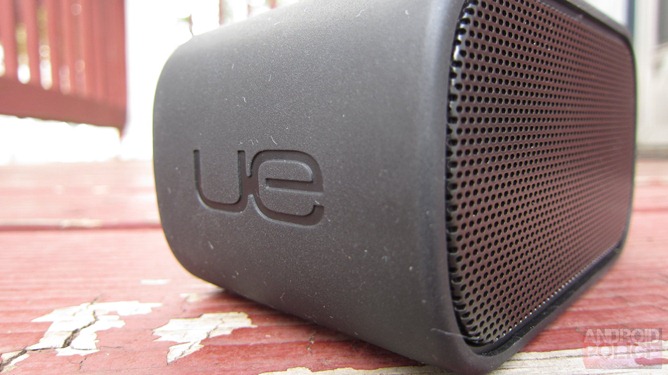 At roughly three times the length and eight times the weight of the Mobile Boombox, the Boombox means business. This isn't something that you're just going to throw in your bag for a weekend away, but that doesn't mean it isn't portable, either - at only 4.4lbs, it's light enough for an evening at the park or beach, and at only 3.1 inches thick, it doesn't take up a a lot of space. 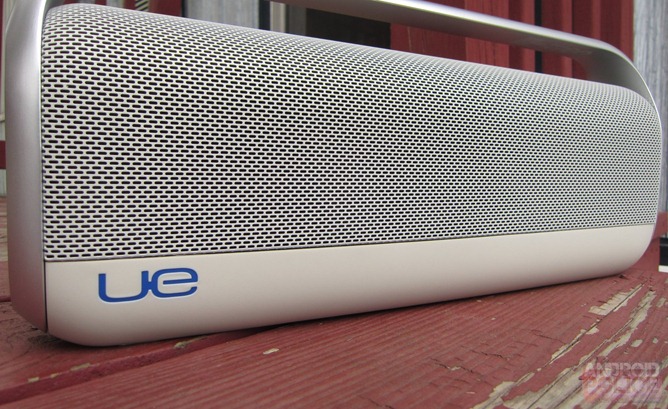 Given its size, the Boombox can put out some serious sound, especially in the low end. The range of sound that this speaker can produce is nothing short of awesome. That, of course, is in no small part to its two 1/2" tweeters, two 3" woofers, and four 2 5/8" passive radiators. If you need volume, the Boombox should be able to provide that, too. I was extremely impressed with how loud this speaker can get: 102 dCB according to Logitech's product page.

It's not all about the sound with this speaker, either - it looks pretty awesome. The silver and blue color scheme is sharp and modern, and the simple controls keep that theme going. On the left side of the unit you'll find a Bluetooth button, power switch, battery indicator light, 3.5" audio-in jack, and proprietary AC charging port. On the left side are the volume controls, which are huge buttons; the top half is volume up, the bottom half volume down. This makes it easy to adjust the volume without looking, with your foot, etc. 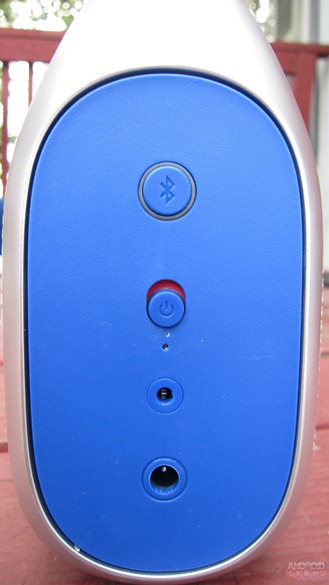 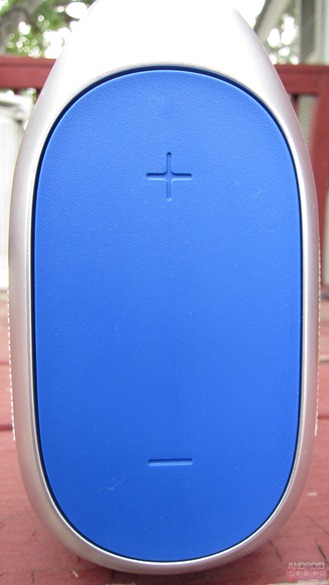 Like the Mobile Boombox, this speaker doesn't notify you of volume changes with an audible tone; fortunately, each jump up or down is easily noticeable. Also like the MB, the Boombox can pair with up to eight devices, but it can connect to up to three at once as opposed to just two. Party time!

When it comes to battery life, there's a lot more power here compared to the MB. Naturally, it has a larger battery, but the longevity takes a hit regardless: in the same test that I used for the MB, I only got about six hours from the Boombox. That's pretty much dead-on what Logitech says it should get, so there was no disappointment there. Unfortunately, if you're away from an outlet and the Boombox dies, you're pretty much out of luck since it doesn't charge over USB and can't be powered up by something like a portable charger. To add insult to injury here, you won't know when the unit is going to die unless you happen to look at the tiny blinking light on the side. Just like the MB, it doesn't warn you when the battery is low - the unit just turns itself off. No more fun for you!

The only feature I would love to see on the Boombox is built-in track controls. Since it connects through Bluetooth, this functionality should be a given on a device of this size and power.

Despite its few shortcomings, I love this speaker. It's loud, capable of producing some amazing, dynamic sound, and is portable enough to take along pretty much anywhere you want. I find it highly unlikely that you'll find a comparable speaker at a similar price. 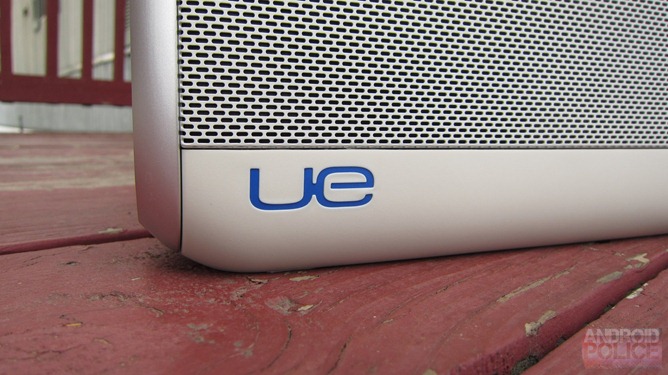