MetroPCS just announced a new 4G smartphone from ZTE for its ever-expanding 4G LTE network. Dubbed the Anthem, this new handset offers mid-range specs under a 4.3" 480x800 display, including a 1.2GHz dual-core Snapdragon processor and Android 2.3. Past that, the pay-as-you-go carrier was overly-scant on details, but we'll assume it's packing 1GB of RAM and some sort of camera (5MP, maybe?). 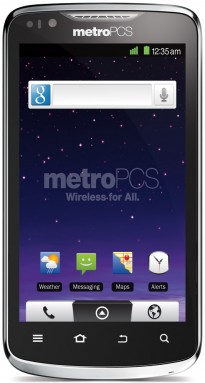 So far as looks are concerned, it's not the prettiest thing we've ever seen, but it's hard to complain for around $220 (after MiR) with no contractual agreement.

The Anthem will be available "in the coming weeks." We'll let you know when that time comes.

The ZTE Anthem 4G features 4GLTE connectivity, a dual-core 1.2 GHz Snapdragon™ processor and a 4.3” WVGA capacitive touchscreen, making it an ideal choice for the style-conscious consumer who also demands speed, performance and ease of use. Available with any of MetroPCS’ tax and regulatory fee-inclusive 4GLTE service plans ranging from $40 - $70 per month and including the new $55 unlimited 4GLTEpromotional plan, the ZTE Anthem 4G makes it possible for value-conscious customers to experience the power of MetroPCS’ 4GLTE network.

The ZTE Anthem 4G offers an exceptional user experience for customers who want to do more with their smartphones, such as share multimedia content in the moment. The Anthem 4G features HD video output via a HDMI connector, which makes on-the-go HD video playback a reality. Consumers can connect the Anthem 4G to a television or computer monitor via the HDMI port to share their favorite HD videos and films on the big screen with family, friends and colleagues, and with Dolby® Surround Audio, the multimedia playback experience becomes more realistic and immersive.

The Anthem 4G will be available in the coming weeks for $219 plus tax after mail-in-rebate for a limited time at local MetroPCS stores or online at www.metropcs.com. The ZTE Anthem 4G supports MetroPCS’ 4GLTEMobile Hotspot service for an additional monthly charge.