Looks like ASUS is gearing up to announce the second iteration of its Turducken phone, the Padfone. A save the date for October 16th was sent out this morning to numerous Italian blogs, highlighting a dual-announcement - one in Milan, Italy, and another in Taipei, Taiwan, which is where ASUS is headquartered. 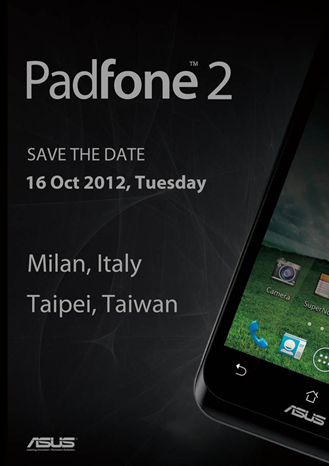 We haven't heard much about this updated phone-in-a-tablet-in-a-laptop before now, but rumor has it that a quad-core processor should be powering the device this go around.

Other than that, there are literally zero details about this next-gen phone/tablet/laptop hybrid, but we'll get all the goods soon enough.