Samsung and Sprint let loose the Galaxy Victory today, a not-quite-budget phone that we saw leaked back in May, then again in July. The official announcement basically seems to confirm what we already knew about the device: that it's not exactly anything to get excited over. 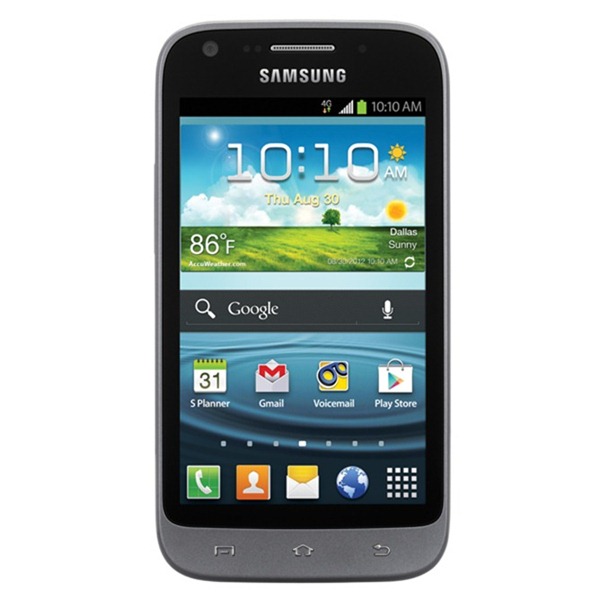 The Victory is packing a 4" WVGA (800x480) SAMOLED Plus display, powered by a 1.2GHz dual-core processor of unknown lineage (we're guessing a clocked-down version of the Qualcomm MSM8960 S4). Our earlier leaks suggested 1GB of RAM and 4GB of internal storage, and that still appears to be the case. There's a microSD slot on board, as well, to expand the latter figure.

A 5MP rear shooter and 1.3MP front facing camera round out the Victory's decidedly midrange specifications, and of course, the now-standard Google Wallet and Sprint LTE support are also in tow. It's running Android 4.0, though we wouldn't call an upgrade to Jelly Bean a given, necessarily - Samsung has an awful track record updating its budget devices.

OVERLAND PARK, Kan. (BUSINESS WIRE), September 13, 2012 - Sprint (NYSE:S), the only national carrier with Truly UnlimitedSM4G LTE data, text and calling to any mobile, will offer the feature-packed Samsung Galaxy Victory™ 4G LTE at a price that makes it an easy choice for customers who are ready to step up to their first Android™-powered smartphone. At less than $100, Galaxy Victory gives Sprint customers the benefit of Sprint 4G LTE at a very accessible price.

Galaxy Victory will be available beginning on Sunday, Sept. 16, for just $99.99 with a new line or eligible upgrade and two-year service agreement, after a $50 mail-in rebate via reward card1(excludes taxes and surcharges), at Sprint Stores, Sprint Business Sales, Telesales (1-800-SPRINT1) and Web Sales (www.sprint.com).

Manufactured by Samsung Telecommunications America (Samsung Mobile), the No. 1 mobile phone provider in the U.S. and the No. 1 smartphone provider worldwide2, Galaxy Victory is powered by Android 4.0, Ice Cream Sandwich, a 1.2GHz dual-core processor, 4-inch touchscreen display and access to the Sprint 4G LTE network. This allows the smartphone to effortlessly switch between applications and enables a rich web browsing experience with true multitasking.

“Price is often a barrier for customers who are ready to transition from a feature phone to a smartphone; Samsung Galaxy Victory brings Sprint 4G LTE to the mass market with the high-end features and capabilities of a premium Android smartphone,” said David Owens, vice president – Product Development, Sprint. “Priced under $100 and paired with Truly Unlimited data from Sprint, our customers will appreciate the functionality of this device without worrying about costly monthly rate plans or surprises on their wireless bill.”

Galaxy Victory customers enjoy a Truly Unlimited experience with Sprint Everything Data plans. Sprint’s Everything Data plan with Any Mobile, AnytimeSM includes unlimited web, texting and calling to and from any mobile in America while on the Sprint Network, starting at just $79.99 per month for smartphones – a savings of $20 per month versus Verizon’s comparable plan with unlimited talk, text and 2GB web (excludes taxes and surcharges). Customers value Truly Unlimited data, because it’s simple and straightforward – no metering, no throttling and no overages, all while on the Sprint network.

As a Sprint ID smartphone, Galaxy Victory provides the ability to cut through the clutter of the more than 600,000 additional apps in Google Play™. Sprint ID offers an innovative way to personalize Android smartphones with apps, widgets, wallpapers, ringtones and more and ID packs deliver a complete mobile experience – based on consumers’, students’ or businesses’ interests or favorite brands. Customers can download and switch among five self-selected ID packs tailored to an individual’s lifestyle and interests with a few simple clicks.

Additional features on Galaxy Victory include:

The search function on Galaxy Victory is fast and simple with S Voice™, an advanced natural language user interface that enables search and basic device-user communication. It can be used to turn the volume up or down on the music player, answer or reject incoming calls, shut off or choose to snooze the alarm clock or take a picture by saying “smile” or “cheese.”

Galaxy Victory also makes it fast and easy to share pictures, videos and presentations between devices or with friends and groups of people:

[Update: Winners] Giveaway: Win One Of Three Extended Battery/Charging Cradle Combos For The ...