Google just pushed a small update to its Chrome browser that brings a handful of tweaks and fixes, as well as a couple of enhancements:

It's all pretty much straightforward, but you may be wondering what an IME is. That's actually just an abbreviation for Input Method Editor, which is a fancy way of saying keyboard. So, it has improved support for third-party keyboards. Cool.

Update: Turns out that this update also improves on Chrome's sandboxing feature, creating a safer browsing experience and keeping malicious code at bay. This will automatically happen on all Jelly Bean devices. It also fixes several other issues in the security department; a full list of fixes and rewards has been posted on the Chrome Release Blog. Here's a quick look at the fixes:

There are also some very, very minor UI tweaks (spotted by Ron and his eagle eye). The tabs are a little more squared off, the X has been moved ever-so slightly, and there's a bit more drop shadow. Like I said, very minor.

This version also removes the "report an issue" box from most screens, as well as adds an "import bookmarks" option to the settings page. 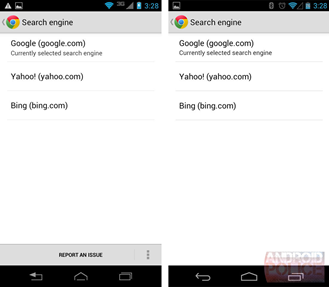 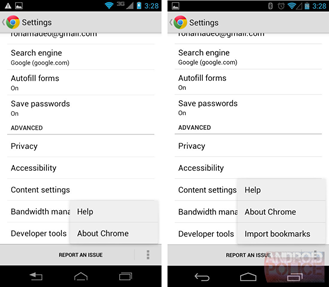 The update is live now, so go ahead and grab it.