As a tech writer, I read a lot of RSS feeds. Hundreds, maybe more. All day, every day. It's one of the first things I check every morning, and the last before bed. And dozens of times throughout the day. When I first started as a writer, Google Reader was my go-to RSS reader, both on my PCs and mobile. It didn't take long to realize GR's shortcomings on both platforms, however. So, after a little convincing from Artem, I switched to FeedDemon on my computers. It's a fantastic application and has increased my ability to find good, relevant content by at least 10 fold.

The problem has been - up until this point - most of the RSS readers on Android are, let's say, not very good. Even Google's own offering leaves a lot to be desired. Recently, however, both Artem and I discovered gReader. Initially, it had a few software quirks - lockups on sync that would sometimes result in ANR (Application Not Responding) dialogs and slow, "choppy" performance, mostly - but Artem has been working with the developer to iron out those issues. With the latest updates, it's now almost the perfect RSS reader. It has several of the features that make me love FeedDemon so much on my PCs, which is a godsend on mobile.

With that, let's take a look at what makes it so good and how it differs from Google Reader. 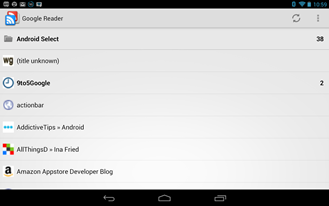 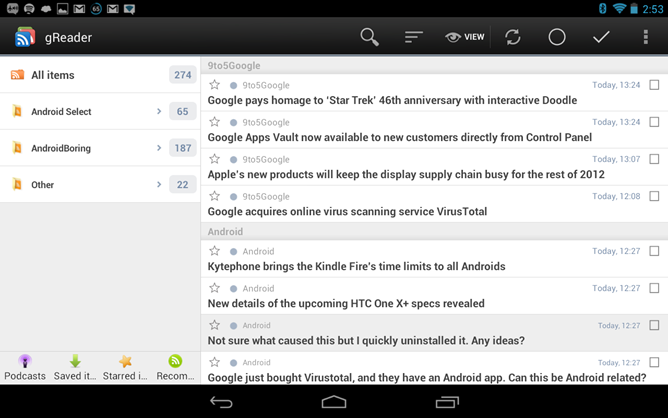 Left: Google Reader; Right: gReader (both on the Nexus 7) 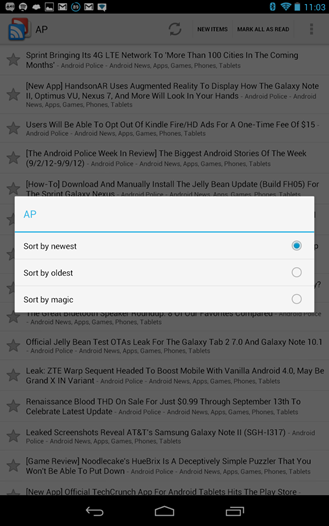 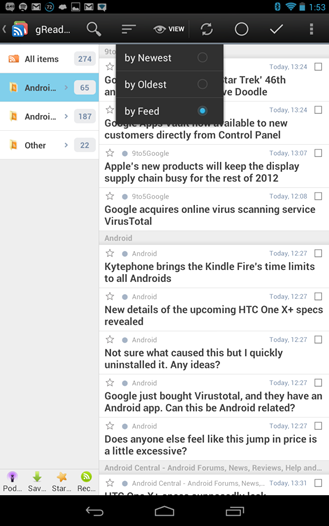 With gReader, feeds can be organized by folders or date published - a feature frustratingly absent from Google Reader, which can only sort feeds by date or "by magic." gReader also offers multiple feed views for quick browsing: it can show full folder and feed lists, as well as a "grid view" that offers small headline snippets with images, or a rich list that displays the first few lines of an article alongside the headline. This makes quickly choosing which articles to actually read a breeze. 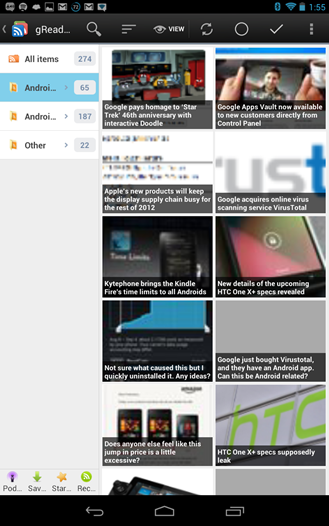 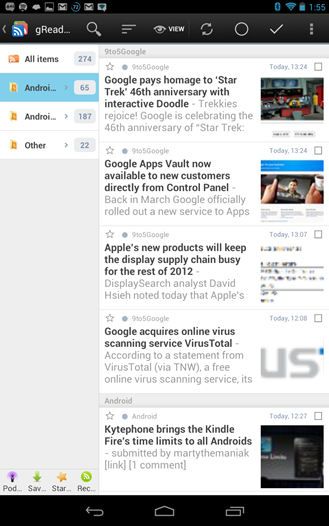 The tablet issue... and the solution

And that's just the beginning of what gReader does so well. Along the titlebar you'll find quick access to basically anything you would need to manipulate the feed: search, change views, refresh, all feeds / unread only toggle, and mark as read. No need to dig through menus or long-press anything; just simply hit a button and it's done. It's a tremendous time-saver.

gReader also features different interfaces for tablets and phones, and unlike Google Reader, it actually uses the tablet interface on the Nexus 7 (see the first two screenshots in this article). That's one thing I've always hated about Google's official client - a 7" display is definitely large enough to support a dual-pane interface. This brings me to another point: the dev of gReader got the spacing between the two panels right. The tablet interface on Google Reader is a wonky one, as it's nearly split down the middle. 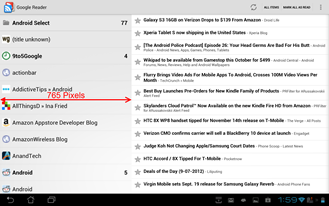 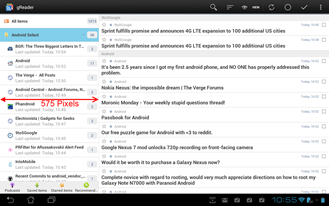 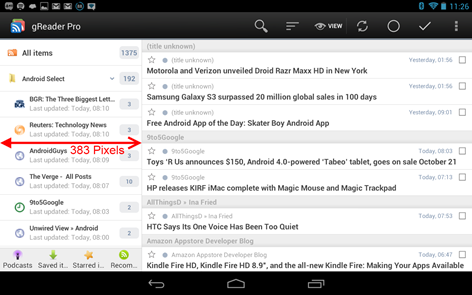 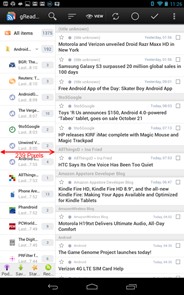 There's no reason to have the folders take up nearly half the screen! If it wasn't designed this way, then perhaps it would actually work on a 7" tablet. Doesn't really matter, though, because gReader fixes that issue with ease. The layout is basically perfect, in both portrait and landscape. Not only that, but the fonts are substantially smaller in gReader (though not unreadable) compared to Google Reader, so you get more content per screen. 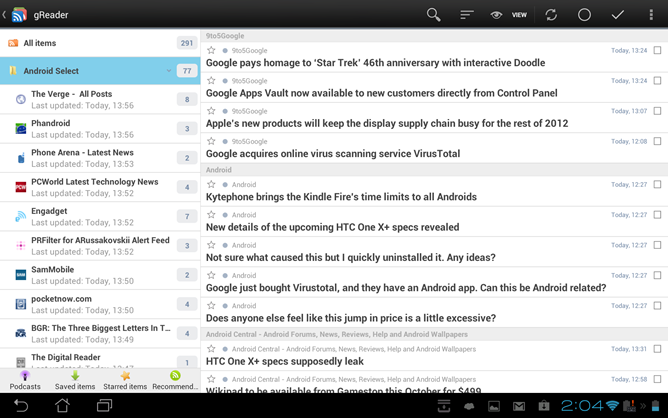 It's amazing on phones, too

The phone interface is equally as intuitive, but instead of having all the navigation in the top bar, it splits it up between top and bottom. Otherwise, it functions exactly the same as it does on a tablet, with options for rich lists, grid view, and the like all just a touch away. 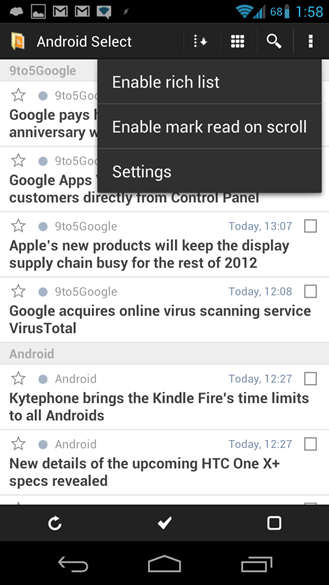 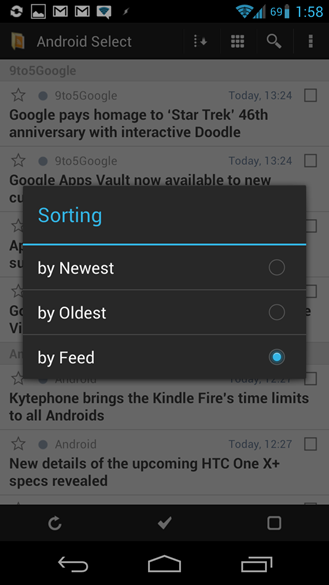 With gReader, marking individual stories and entire feeds as read is super easy. Each entry has a checkbox beside it, so you can quickly run through and tick the items to mark off the list. No more long-pressing just to mark something as read, which is brilliant. It works wonderfully. The app is also "smart" enough to kick you back to the folder list when you mark a folder as read, and, unlike Google Read, it can mark an entire feed as read instantly (Reader usually takes 5-10 seconds for larger feeds). For those who don't check RSS every minute of every day (like Artem and I do), there's a feature that can quickly mark all items as read older than a certain time (e.g. 1 day, 2 days, 3 days, etc.). It's awesome.

Settings: The power under the hood

Up to this point, we've really only scratched the surface of gReader: the interface and basic features. The things that really makes this an insanely powerful reader, though, can be found in the settings menu. It's loaded full of incredibly useful options. Unlike some applications with tons of features, however, there's nothing superfluous here. Every option has some sort of usefulness to the nature of the app - it's great. 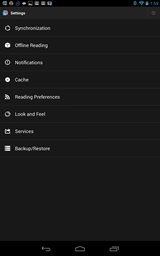 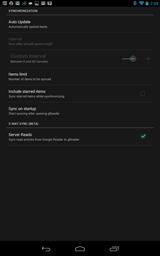 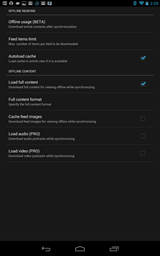 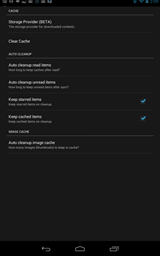 Everything from sync options to themes, notifications, and caching options can be found here. You have full control over basically every aspect of the app; nearly everything can be modified in some way or another. To dig through all the various settings is a task in itself, but one that's very much worth it in order to get everything set up perfectly. Want automatic feed sync and unread notifications? Done. How about offline caching so you can read even while not online? No problem. You can even change the user agent of the built-in browser here. Amazing.

gReader also has integration (for sharing) with G+, Facebook, and Twitter; as well as apps like Pocket and Instapaper. When I said this app has everything, I wasn't lying. Anything that you could possibly want from an RSS reader on your mobile device is here, and it's done flawlessly.

With all these insane features, you probably expect a pretty hefty price tag to go with it, right? Wrong. In fact, there's a free, nearly full-featured version of the app. The Pro version removes ads, brings better widgets, podcatching, and voice reading to the app, but that's it. The free version is completely useable by itself.

With all that this app has to offer, though, it's well worth the $5 for the Pro version if for nothing else than to support the dev. He has clearly spent a lot of time developing an amazing application.

You really should have it installed. Lucky for you, there are two widgets down below to help make that happen.