Android developer Noodlecake has a reputation for making clean, incredibly fun games. Its newest effort is called HueBrix, and it just arrived in Google Play a few days ago. This is a puzzle game that has a simple premise: fill in all the squares. You will only make it a few minutes before the cunning level design starts the slow process of melting your brain.

There are over 400 levels in HueBrix, but all of them start in basically the same way. You have a grid of white squares that need to be covered with colored lines. Just drag a path from the various starting blocks to fill in all the spaces. Before you say, "Oh, that sounds easy," let me stop you right there, cowboy. The first five or ten levels are pretty simple – you can knock them out in a couple seconds. But the difficulty ramps up quickly from there.

Each colored square has a number on it which tells you how many spaces it can cover up. It's up to you to make sure you use them in the right way to work in concert with the placement and capacity of the other colors. More rules are added over time, for example squares show up that you can only drag through in a certain direction, or those that have to be covered with a particular color. There are even blocks that add or subtract available spaces from your current line.

HueBrix has levels that, as far as I can tell, are designed to drive you slowly insane. It often seems so simple as you drag a line through the grid, but then you get the the end and can't fill in that last square. When you finally solve it, though? Really satisfying. 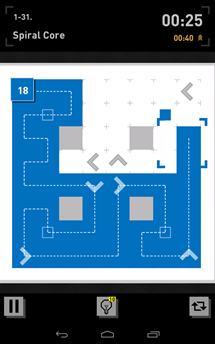 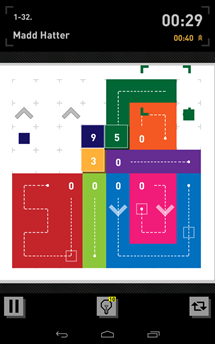 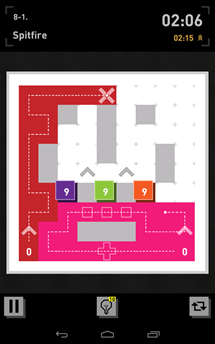 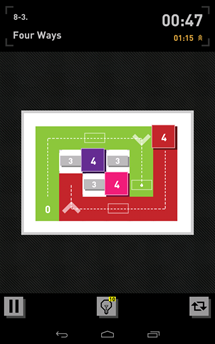 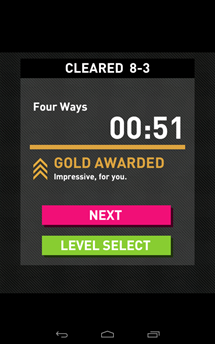 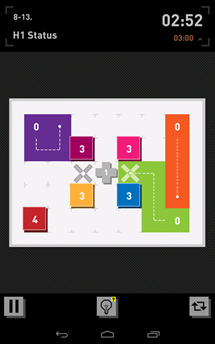 I don't know if I'd call any of this a "control scheme". There are no buttons, or sliders – just dragging a line. It's the simplest method of user interaction in a game, and it's instantly understandable. It took me just a few seconds of playing around to understand all I needed to know about how to beat a simple level in HueBrix. The controls do everything they need to.

If at any time you make a mistake, you can drag a line backwards to undo things. Alternatively, you can tap on the starting point to remove the whole line. The reset button resets the whole level, but be aware that none of this resets the timer in the upper right corner. Oh, you weren't being driven crazy enough be the mind bending puzzles? Well, how about a time limit? Each level has bronze, silver, and gold tiers that you can reach if you finish the puzzle fast enough. It's hard to put this game down.

There are the regular 400+ levels of brain hurt, but you can also build your own levels to inflict on others. For a cheap game, HueBrix really brings the features. I also like that when you open the game, you can dive into the level selection screen, or just hit quick start to get smacked with the next puzzle right away. It's also nice that you can pick any level in the game to play without beating the previous ones.

HueBrix's clever simplicity extends into the graphical department as well. The game board is just a basic white square with a little dash of color. It ends up with a little bit of a modern art vibe as you fill in the white space with vibrant colors. When you complete a level, the lines you've drawn uncoil and slide out of view in a very neat animation that is especially fun in the more complicated levels. 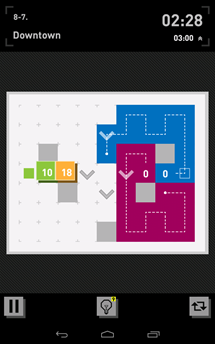 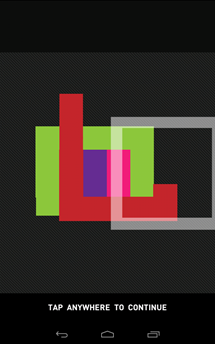 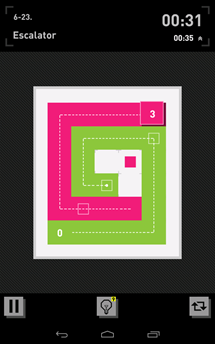 This game isn't designed to be the prettiest thing with hundreds of megabytes of textures, HueBrix is simple and functional, but that also makes it snappy. I tested the game on a Galaxy Nexus and a Nexus 7. The game ran perfectly on both. Level loads were almost instantaneous and every touch detection was dead on.

Do you like puzzles? If you even thought about saying 'yes,' get HueBrix. It's an incredibly addictive puzzle game that is just simple enough that you don't get fatigued playing it for long periods, but challenging to the point that you don't get bored. It reminds me of Tetris a bit in that I'm playing it in my head as I go about my day, just like I did with Tetris years ago.

400 levels is a lot, and some of them are going to break you. I'm feeling like a drunk ape trying to work a set of chopsticks around the end of the "Medium" levels. It's not impossible that I'll sort some of these levels out, but it's much harder. There is a hint mode, but its usage is limited.

HueBrix shows what a talented developer can do on a mobile device without a bunch of fancy graphics. You can pick up HueBrix for a mere $1, and it's a good deal.