I had a chance to spend some time with Amazon's new Kindle Fires today at the company's event in Los Angeles, so I'm going to share a few thoughts about Amazon's newest Android-based slates. Disclaimer: Yes, I only spent about an hour with this tablet today, but I'm going to give you a sense of where I think the Kindle Fire HD is headed, who it's targeted to, and whether or not you should be interested in buying it.

Wow. For $200, the Kindle Fire HD has set a bar. Granted, Amazon's had a year to refine its original cheap-slate and really hone down the whole concept. Your first question, no doubt, is: How does it stack up against the Nexus 7? First, check out this (very) brief hands-on:

In terms of build quality, right out of the gate I'm giving it to the Fire HD. This thing feels solid. It even feels, dare I say, premium. For $200, that's not an easy feat. Even the power and volume buttons feel absolutely fantastic, better than what I've used on $500+ Android tablets. Aesthetically, I wouldn't call the Fire HD a thing of beauty or anything, but it's not ugly, and I think it looks a lot more serious than the Nexus 7. It looks like something that might be kind of expensive, is I guess what I'm saying. The giant bezel is a bit of a take-it-or-leave-it affair, but while I was puttering away on a demo unit, I didn't mind it at all. 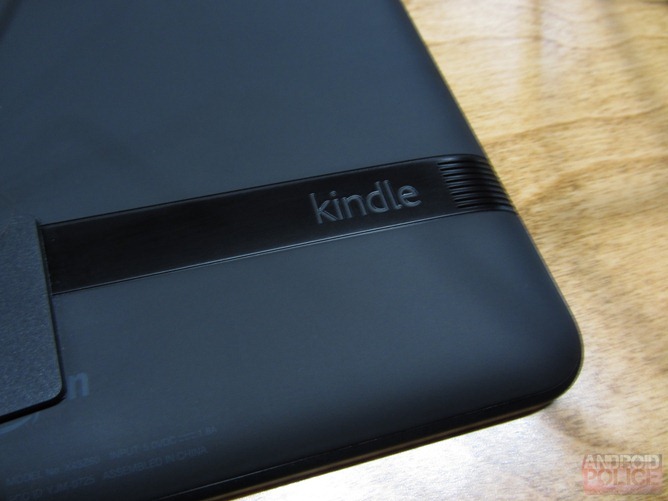 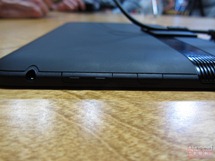 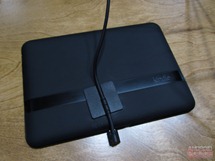 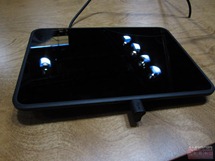 The display itself was pretty great. Better than the Nexus 7 in terms of glare (Amazon is using special glare-resistant layering on the HD), black levels, and contrast. It looks more saturated, too. But the displays on both devices are good enough that most people probably won't care enough to really notice the difference until they're side by side. The black levels, decreased glare, and improved contrast would probably make the Fire HD a decidedly better device for movies, though.

Amazon claims 11 hours of battery life for the 7-inch version, which is pretty damn good for a 7-inch device.

Internal storage is a decisive win for the Fire HD, which starts at 16GB, whereas the Nexus 7 starts at just 8GB. Oh, and the MIMO Wi-Fi thing, along with the dual antennas, is pretty effing awesome if it actually results in some noticeable, real-world speed / signal strength differences. Amazon's Wi-Fi at the event didn't exactly make such a test feasible, though. I do know that the Wi-Fi antenna on the Nexus 7 isn't the best one ever, and dual antennas plus MIMO could really make a difference when you're using something like a crappy public hotspot or are in a house with really thick walls.

The Fire HD's dual speakers put the Nexus 7's to shame. Again, this just leads us to the fact that Amazon really wants you to watch Instant Video on this thing, and play a lot of games. They are on the back of the tablet, but they're positioned such that, in landscape mode, your hands will form little sound "backstops" that reflect the audio back toward your face. Neato.

The Fire HD ran very smoothly, much more smoothly than I was expecting. But some aspects of the OS did feel slow - particularly in ways that Google's Project Butter sorted out in the newest version of Android (4.1). Loading apps could be a bit laggy, and while the UI itself was very smooth, going from task to task was often accompanied by a noticeable pause in system responsiveness. This could be a pre-release software thing, but given how soon the Fire HD 7-inch is coming out (next week), I'm not so sure. 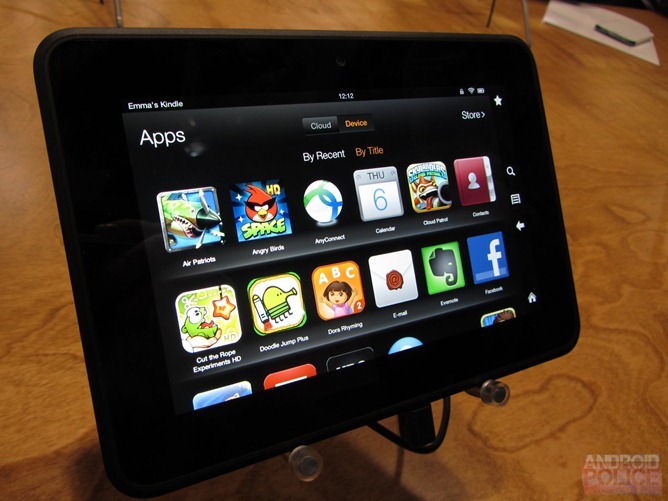 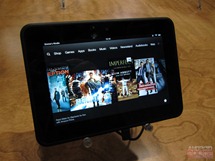 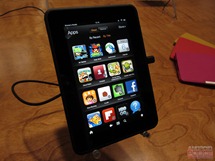 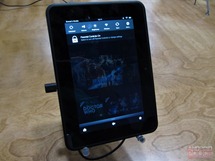 As far as usability of the software goes, the Fire HD is all about putting things you can buy, stream, and play at the center of the user experience. It's not about productivity, connectivity, or displaying information: it's about consuming. The entire Kindle OS is about stuff you get from Amazon. Sure, you can use a lot of the apps you would on a normal Android tablet, but Amazon is clearly much more concerned about putting digital products in your face than it is in creating a beautiful, elegant OS. In terms of an overall tablet UX, the Nexus 7 runs away with it - it's not even close. The Nexus 7 is faster, more capable, more feature-rich, and simply more serious about making your tablet useful.

You get all kinds of stuff like Amazon's new X-Ray feature, Dolby sound enhancements, special Kindle app features, and various other Fire-exclusives. There's a whole parental control mode thing, too, because the Fire HD is very much marketed toward audiences of all ages. You can set time limits for use, go into a locked-down kids mode, and block certain content.

The Kindle Fire HD, in both sizes, also comes with Special Offers standard (there is no version without offers). Ew. So your lock screen is covered with a giant advertisement every time you turn on the display. It obviously keeps the price down, but it absolutely says "not a serious consumer computing device" to me. 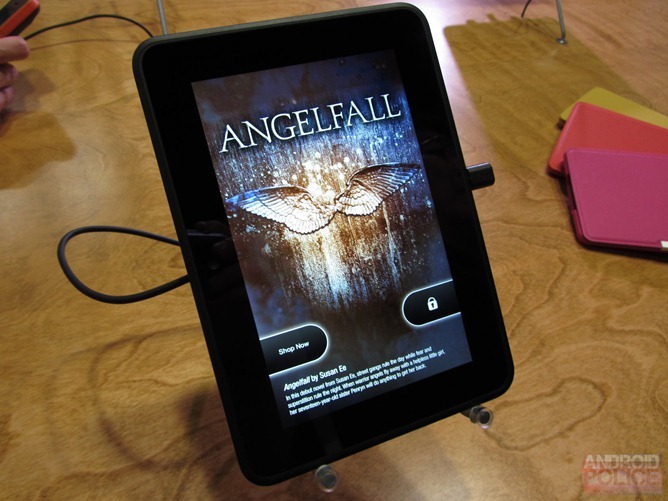 So, Which Should I Be Considering?

I think there's a problem with even making this comparison. While the Nexus 7 has, in a very general sense, set out to do what Amazon did with the original Kindle Fire - sell content, not hardware - Google still has a different target audience and end-goal with its tablet. Google really wants everybody to buy Nexus 7s. It wants your mom, your uncle, and techy people to get on board with the idea of falling in love with the Android experience in tandem with the Google Play content ecosystem. To convince everyone that Android tablets are cool, affordable, and fun. 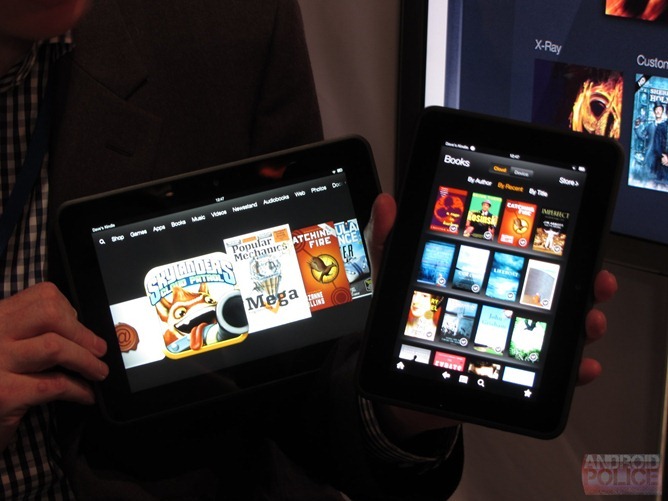 The Kindle, on the other hand, wants people who use Amazon to use Amazon even more. The Fire HD is built to serve this purpose. It's a narrower market. Even if the Kindle Fire (according to Jeff Bezos) made up 22% of all US tablet sales last year, it did that by aiming itself at a group of consumers that were predisposed to want it. People who love Amazon probably love the idea of the Kindle Fire. Those same people are simply less likely to be convinced that a "Google tablet" is what they want.

While Bezos himself made it very clear that Amazon is competing with Google's slate, he really only said it because he's out to convince Amazon customers that Amazon knows what's best for them. Amazon's not looking to make converts of the more tech-savvy individual who wants a real tablet computing experience, and it's not looking to tear Google diehards away from our beloved Google services. Bezos pitch was this: want to watch movies, play games, shop, read, and browse the web? We do it better than everyone else, and we do it at a price that's highly competitive.

I think to ask "which should I buy?" has almost nothing to do with the tablets themselves. It has to do with what you, as a consumer, want out of the tablet computing experience. If you want Amazon at your fingertips, with many popular games and apps from Android available to you, in addition to lots of exclusive value-added Amazon neatness, the Fire HD is probably the better tablet for you. Like Jeff Bezos said today: the Kindle Fire is a service, not a product.

If you want to dive into tablet computing, to really see what a cutting-edge company like Google is doing with software and user experience, and to live in the Google Services world - and do it all on the cheap - the Nexus 7 is the device you want, bar none. Forget about what everyone today is saying about specs. Forget about anti-glare technology, Wi-Fi speeds, and Dolby Stereo enhancements. Those are all very cool things. But none of them should actually be relevant to deciding which of these devices you want. Hell, having both probably wouldn't be redundant. I might get one just for the video service. 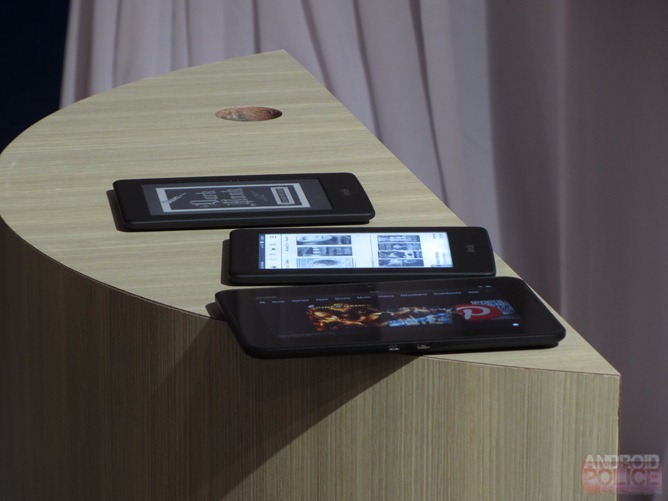