T-Mobile's plans have always been super-duper confusing to me (and everyone, I would think), and today, they're making things slightly simpler. I think. Here is the arrangement of the new "Classic" plans, with the new Unlimited Nationwide 4G in the middle: 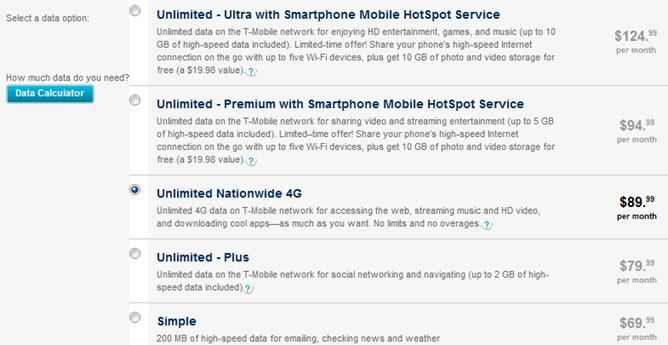 The catch is that the new Unlimited Nationwide 4G doesn't come with mobile hotspot service. So, no Wi-Fi tethering unless you want a soft data cap. For $5 more a month you gain the hotspot feature, but are capped at 5GB of "high-speed" data. Which, for most people, is probably plenty.

For $10 less a month than you're seeing in the above image, though, you can get a 500 minute plan with these same data packages, and keep unlimited text. So, the lowest price T-Mobile will give you truly unlimited 4G data, text, and 500 minutes is $80 a month - on contract.

Off contract, though. You have even more options. At the cheapest, if you buy a phone off contract (or bring you own device), T-Mobile is willing to sell you a 500 minute "Value Package" with pay-per-use texting and the Unlimited Nationwide 4G plan for $55 a month. Confused yet? Look at this page.

And the fun doesn't stop there - to celebrate the launch of its new super-actually-unlimited plan, T-Mobile is now including the HTC One S (and some other, undisclosed "4G smartphones") in its monthly equipment repayment program. That means you can go buy a One S for $50 ($0 after a mail-in rebate, ugh), and then pay $20 a month on top of the cost of your plan for 20 months as part of your two-year contract. But the One S is only $150 after the MIR on a new two-year agreement, so you'd actually end up paying more by paying less.

Gameloft Releases A New Trailer For Wild Blood, Promises The Game Will Arrive On Android 'In ...