Everyone's favorite Twitter tipster has just dropped some interesting (and disappointing) images on us. For those of you hoping for bezel-free display on a Motorola phone, you may be in for a bit of a wait if this is all Motorola is planning on releasing today. The image shows us two Verizon-bound Motorola devices and, well... they look about the same as most other Motorola devices. The two devices appear to be images of the very-very-soon-to-be-announced RAZR M and RAZR HD. 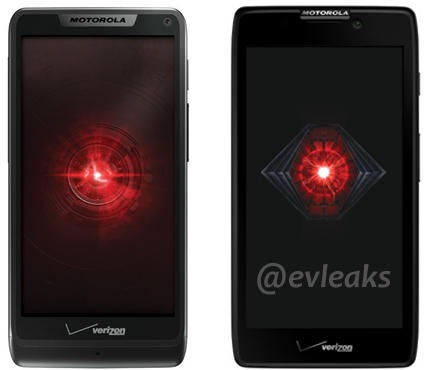 The only thing we can know for sure is that they're headed to Verizon. If the giant red Droid eyes weren't a dead giveaway, the Verizon logo is. Beyond that we don't have any interesting details. However, @evleaks dropped some shots of the Lumia yesterday and was dead on. The image was tweeted with the message "No edge-to-edge displays today." As our own Ron Amadeo pointed out, while Bloomberg speculated that we might see an edge-to-edge display on the 5th, the event on the 18th is much more likely. We may still see an edge-to-edge display at some point, but it looks like that day isn't today.