Ok... Hot report out of Bloomberg, just now, that Motorola will be releasing a phone with no bezel. None. I'm having just as hard of a time believing this as you are.

It's Bloomberg though - they're reliable. They can't be wrong, right? They say the phone "uses the entire front of the device as a display," and "maximizes the screen viewing space by eliminating the black frames or bezels around the display." Several times they use the phrase "edge-to-edge" screen.

The author's twitter page promotes the story with the phrase "sans bezel." He also reported it on video and described the phone as "all screen" and said it will "do away with the little bits of screen that aren't screen." They really are claiming this thing has no bezel. None at all.

A bezel-less phone would truly be a "next generation" phone design: eliminate everything that isn't useful screen real-estate. You could fit more screen into a smaller device. It's certainly not a new idea (see: every futuristic movie ever), or an impossible one, but actually building it would instantly put you at the top of the Android heap, and your company would be seen as leading the way into the future of phone design.

Bloomberg pegged the phone to, of course, run Android, and that it would be part of Verizon's lineup. They mention Motorola's September 5th conference, but don't actually say it will debut there. I still don't quite believe it.

Oh. There is this one little thing that Bloomberg didn't mention: Motorola also has an event with Intel scheduled for September 18th. The invite for that looks like this: 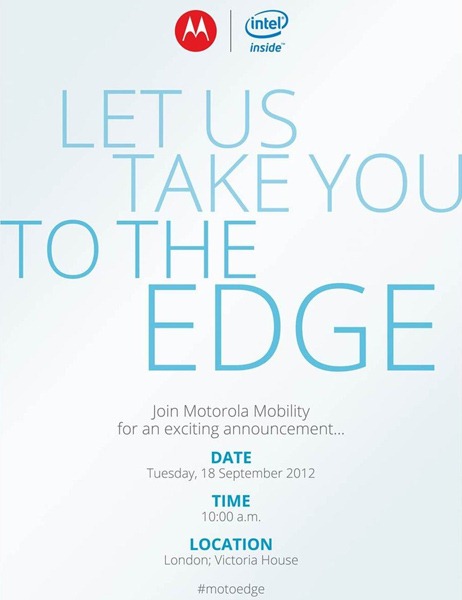 To the edge? I'm starting to think this might actually happen. An all-screen device - one step closer to that sci-fi future we see in the movies. I could not be more excited.

So. London. September 18th. A phone with no bezel. I'll be sure to wear a hat to stop the bits of brain from blowing out the back of my head.

[Deal Alert] BeyondPod Podcast Manager Unlock Key Goes On Sale - Listen To Our Podcast On Any ...

Images Of An Unnamed HTC Device Surface - Could Be The Rumored 5" Mega-Smartphone Headed To ...