South Korean manufacturer Pantech still hasn't made it big in the U.S. market, but their partnership with AT&T has proven to be a steady one so far. The Magnus, AKA the P9090 that we spotted earlier this week, would seem to be Pantech's first high-end device for AT&T, and the first photos of the device have now hit the Internet. It looks like a pretty standard slate phone, with the interesting addition of an asymmetrical duo-tone plastic back. Details are pretty scarce at the moment, though it looks like the lighter gray panel is probably a battery cover. 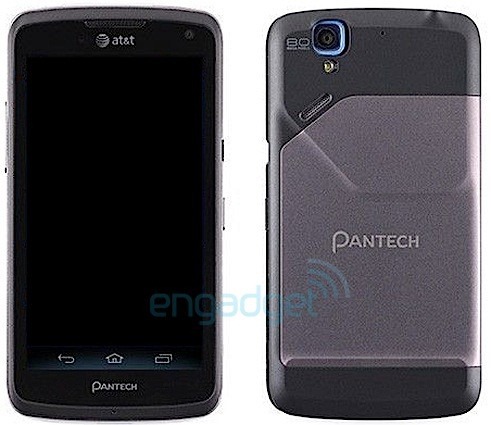 According to the earlier leak, the Pantech "Magnus" P9090 will run on the popular Qualcomm Snapdragon MSM8960 SoC, giving it a dual-core 1.5Ghz processor and an Adreno 255 GPU. NFC will be onboard, and the photo shows an 8-megapixel camera with LED flash. Given an awkward resolution of 720x1196 and the on-screen buttons, we're betting that the Magnus will thankfully run Ice Cream Sandwich when it reaches American shores. These specs line up pretty well with the Vega Racer 2 model for Korea; if the Magnus is indeed an imported copy, then the screen would be 4.8 inches of Super AMOLED+ powered by a 2020mAh battery. These specs can't be confirmed, and keep in mind that American carriers have a habit of swapping out components for cheaper alternatives on their customized phones.

The Magnus is definitely headed to AT&T in the near future, but pricing and availability remain up in the air.