The LG Optimus G, the tantalizing flagship device for which LG released an teaser video last week, is finally official.

The phone, which we know to be packing a 4.7" 1280x768 display, 2GB RAM, a 1.5GHz quad-core S4 Pro processor, and a 13MP rear camera, is slated to launch in Korea next month, followed by a yet undated global release expected to start with Japan in either October or November. The Optimus G will also be packing a 2100mAh battery pack, Android 4.0 Ice Cream Sandwich, and a super slim 8.45mm body. 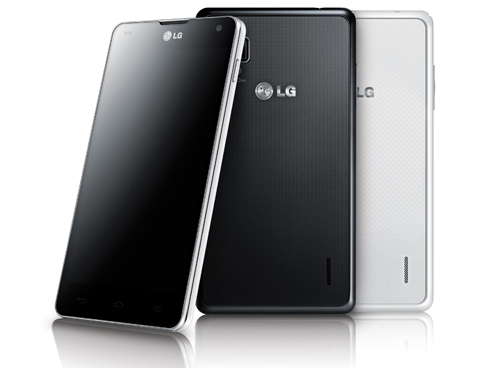 The Optimus G's Japanese debut on NTT Docomo will see it getting a red paint job and a few extra features including an infrared transmitter, waterproofing, and LG's Palette UI. 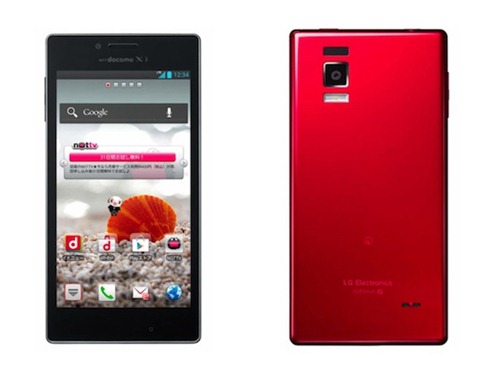 LG's press release on the subject also boasts the phone's form factor, which carries the "world's first fully integrated touch technology," enabling the reduction of the space between the handset's screen and glass layers, as well as a minimal bezel which "disappears" when the phone's display is switched off.

There's no denying that the Optimus G looks to be a gorgeous – and powerful – slice of mobile tech. While there's no word whether (or when) the device may see a stateside debut, we'll keep you updated pending more information.

Update: LG just sent in the press release in English:

Best-of-Best Technologies
To offer the best smartphone to consumers, LG gathered industry-leading partners and technologies to develop the Optimus G. In collaboration with Qualcomm, LG developed the Optimus G with the goal to be the first LTE smartphone with the Snapdragon™ S4 Pro CPU. LG also joined hands with vertically-integrated sister companies LG Chem, LG Display and LG Innotek for the ultimate battery capacity, viewing and user experience.

Next Generation Quad-Core with LTE
The Optimus G will be the first commercial and global smartphone to offer the Snapdragon S4 Pro (APQ8064) processor with a Quad-Core Krait CPU, LTE supported capabilities, and the newest generation Adreno™ 320 GPU. The Snapdragon S4 Pro runs at 1.5GHz and features Asynchronous Symmetric Multiprocessing (aSMP), which enables each core to power up and down independently, for maximum performance with better battery life. Furthermore, the Adreno 320 is over three times faster than the Adreno 225 found in previous Snapdragon processors for an enhanced gaming experience with faster frame rates, smoother play and support for higher HD resolution displays.

Moreover, the Optimus G will be the first smartphone to be equipped with LG Innotek and LG Display’s newly developed G2 Touch Hybrid Display for touchscreen panels (TSP). The G2 Touch Hybrid Display is thinner than current TSPs and offers the slimmest panel display with no diffused reflection for clearer and sharper visibility, even outdoors. Thanks to the new technology, the thickness of the screen panel has been reduced and the screen itself is much stronger to withstand damage from impact.

Enhanced UX for Productivity and Entertainment
Whether users need functionality or fun in their daily lives, the Optimus G has it all, including a high-resolution 13.0MP camera and unique and differentiated user experience (UX) features, such as:

- Live Zooming allows zooming in and out while viewing a video;
- Dual Screen Dual Play, not only allows mirroring between the smartphone and a TV, it also has the ability to display different content on each screen. For example, a slide presentation can be displayed on the TV while the Optimus G shows the accompanying speaking notes;
- QMemoTM, first seen in the Optimus Vu:, allows users to write, draw, or jot a memo directly on the captured screen with their finger for sharing instantly with others as an attachment or a URL;
- Time Catch Shot allows users to select and save the best shot among the images taken just before the shutter button is depressed;
- Cheese Shutter takes a photo when a voice command is spoken.

The added UX features are anticipated to provide instant and intuitive productivity to complete tasks beyond simple multitasking.

Innovative and Modern Look
LG maintained its differentiated design philosophy with the Optimus G. The Optimus G is encased in an eye-catching slim body epitomizing timeless beauty that perfectly demonstrates LG’s design philosophy. Premium glass is utilzied on the back cover with a polarized glass pattern that offers a clean, modern look. The G2 Touch Hybrid Display contributed significantly to the design of the Optimus G as it reduced the thickness of the device enabling Optimus G to fit more comfortably in the hand. And the jet black front display flows smoothly into the body for a seamless look with no gaps.

“We are confident that users will have a superior experience with everything that we’re offering in the Optimus G,” said Dr. Jong-seok Park, president and CEO of LG Electronics Mobile Communications Company. “Optimus G isn’t just another high-performance phone with the latest bells and whistles. It’s a collaboration of some of the best component makers on the planet coming together for a singular cause, to develop a smartphone that stands out in a sea of me-too devices.”

NTT DOCOMO will be the first to unveil a Japanese edition of the Optimus G. The global version of the device will be launched in Korea in September, followed by other markets worldwide.