After disappearing from T-Mobile's own website and appearing as backordered on others, a matter we posted on just a bit earlier today, we've heard from a very reliable industry source that T-Mobile is putting the Galaxy Note on "EOL" (end of life). We have every reason to believe this person (though they spoke on condition of anonymity), and today's events make it pretty obvious that's what's going on. The EOL date is estimated around November 1st, though that remains subject to change based on how quickly T-Mobile's remaining inventory is depleted.

Update: T-Mobile responded to our inquiry with: "The Samsung Galaxy Note is currently out of stock online via www.T-Mobile.com; however the device is still available for purchase at select T-Mobile retail stores."

This is pretty much what we expected to hear back - T-Mobile does need to clear remaining stock after all, so it makes sense for the Note to still be available at retail stores. And when was the last time a company completely removed a brand new device from its website just because it's sold out? If anything, showing a hot item as "out of stock" only increases demand for it.

Update #2 8/28/12: Amazon Wireless, which used to stock the Note, now lists it as unavailable, like pretty much every other major Internet cell shop. However, T-Mobile did put it back on its site as "out of stock" - something we thought they should have done all along. 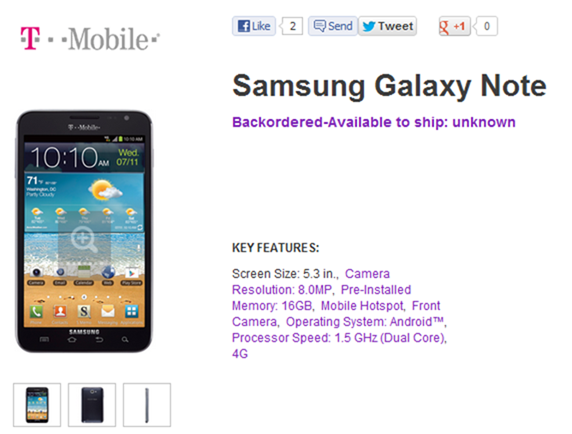 The Galaxy Note for T-Mobile's was confirmed all the way back in April. By May, a July release was rumored, but half of July came and went. Finally, on July 16, T-Mobile announced the Note, with most everyone knowing full-well that Samsung would be unveiling its successor at the IFA show in Berlin at the end of August. The Note 2 has even been hinted at in a teaser video for Samsung's Mobile Unpacked event at the show.

And, let's be honest, we were all thinking it: How could T-Mobile justify launching the original Note as a "new phone" nearly a year after its release? Especially with the announcement of its successor in such close proximity. It just didn't make sense.

Apparently, someone at T-Mobile (or Samsung, possibly) agreed.

HTC Proto Shows Up In Photos, Could Be A Successor To The HTC One V

T-Mobile Officially Acknowledges Google Maps Reboot Bug, HTC And Google Said To Be Working On A ...