Okay, now that I've got that out of my system, let me introduce you to Spirits. This game features a series of ethereal spirit beings (see where they got the name?) that steadily stream out of the entrance to a level. Your job is to transform some of the aural manifestations into clouds, vines, and all manner of natural tools to lead the remaining wisps to the exit of the level. If it sounds familiar, then you probably owned a Commodore Amiga or played PC games in the early 90s. Also, kudos to you for translating "clouds and vines" into "diggers and bombers."

The gameplay is incredibly reminiscent of the popular 90s game about those lovable, if suicidal, green-haired goons. The spirits you're leading pace back and forth as long as they can and will continue forward no matter what dangers are in their way. Which is why it's up to you to keep them safe. Each level has a set of obstacles you have to overcome, as well as bonus plants to collect if you want a challenge. 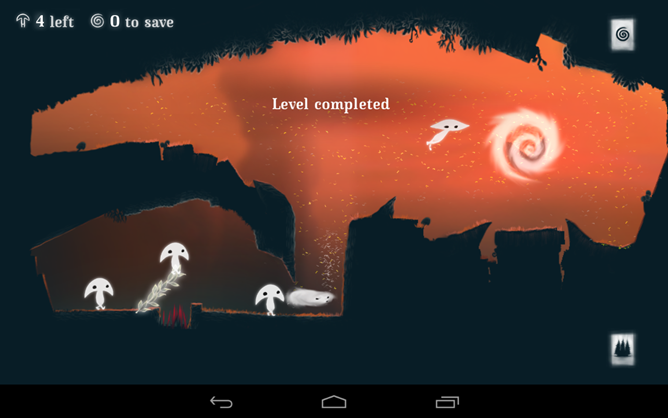 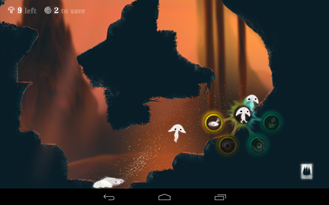 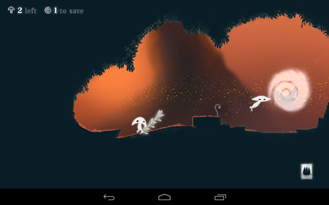 The levels all have a certain number of spirits that will be introduced, as well as a requirement for how many must survive if you want to win. This means you must use your disembodied friends carefully. Puzzles can be solved in a variety of ways, but the most efficient methods will score you the highest.

Your spirits can be transformed into a variety of supernatural tools that move the rest from place to place. Clouds can be created that float your translucent buddies in the direction of your choice, vines can be grown that provide a staircase of sorts, and boulders can be used to dig downwards. Some of the tools, like the clouds, are imprecise, which means that getting it just right requires a bit more finesse, but it also makes the game feel a bit more free form and less rigidly structured.

I don't generally get inspired by the appearance of a video game. Impressed, maybe. Engaged, perhaps. But Spirits is one game that goes beyond looking good for design's sake. It's gorgeous. The levels are colorful and calming, the intro video is enthralling if brief, and the music that plays throughout the levels is tranquil and peaceful. This game isn't just relaxing. It's downright zen-like.

The beauty of this game extends beyond the artwork, though. As I mentioned in the previous section, this game is very similar to Lemmings. The differences in game play, though, are obvious. Whereas in Lemmings, you would frequently burrow down, build, or blow things up to win, the mechanics in Spirits are a lot more fluid and natural-feeling. You grow vines, instead of constructing staircases. You create clouds that other spirits will float on. More often than not, the exit of the level is higher than the entrance, not lower. It is both literally and figuratively uplifting.

If I sound like I'm waxing romantic about a game, that's probably because I am. Yes, this is a game for you to play on your smartphone or tablet. No, it's not going to help you achieve enlightenment. However, it is designed with an atypical aesthetic in mind. For contrast, the last game I got into for a lengthy period of time was Agent Dash. While it was very fun, the fast-paced action, the sudden noises, and the pressure to collect (or buy) gems to earn upgrades all contributed to a stressful challenge. Spirits takes a decidedly different approach to the feel of the game and it shows. In a word, it's lovely.

The gameplay itself may not be for everyone. And, yes, the fact that it's so obviously based on the concept of Lemmings does initially distract from the experience. However, the game certainly gives you your $3 worth. Between the impeccable, immersive experience, and 47 full levels to play through, a few bucks doesn't seem like that much to spend on this one.

The only folks I can think of who wouldn't enjoy this are anyone who doesn't enjoy slower-moving games, or who play games to get amped, not relaxed. We can, of course, co-exist, but if you prefer your mobile time-sucks to have more explosions and fewer leaves and flowers, you may find Spirits doesn't suit your tastes (yes it occurs to me, after writing that out, I may be in the minority here). Also, if you didn't enjoy Lemmings as a kid, you might not like this one. Those caveats aside, everyone else should already be heading to the widget below.

Additionally, right now Spirits is part of the third Humble Bundle for Android, so if you want to get this game plus a bunch more, you can save some money and support indie developers at the same time. 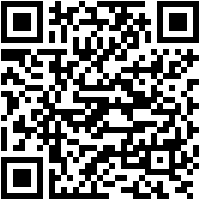