Today, the folks behind the immensely popular Humble Bundle announced a few new games for the third edition of its Android package deal. Four new titles have been added for previous or future customers who pay more than the average (which, as of this writing, is sitting at $6.14). The new entries are Anomaly: Warzone Earth, EDGE, Osmos, and the crowd-favorite World of Goo, which, together, cost about $15 on the Play Store. 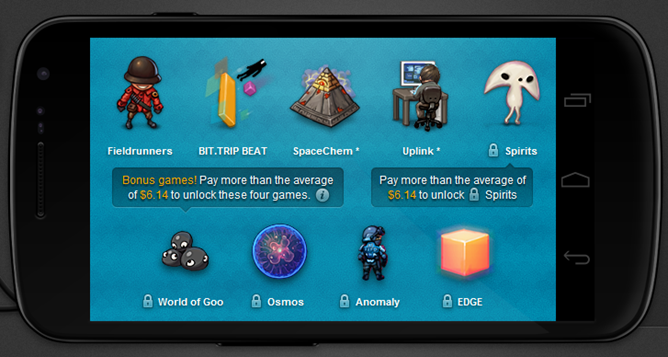 These four new arrivals come in addition to the previous set of games—including Spirits, which we reviewed earlier—bringing the total number of indie titles you can get to nine, for a mere six bucks and some change. Given that only one of these nine games is cheaper than $3 on the Play Store normally, and the total for all of them would be $33 (without including the licenses you'll also get to play them on the desktop), it's a pretty difficult deal to pass up. There are seven days left before this bundle expires, so hurry up!