Only in the confusing realm of smartphone data plans can 'unlimited' not really mean unlimited. We started to see the big carriers cut back on all-you-can-eat data a few years ago, and T-Mobile was no different. The nation's smallest national carrier relied on vague language and semantics to justify its continued use of the word 'unlimited.' Now it looks like T-Mobile is going to finally offer real unlimited data again. 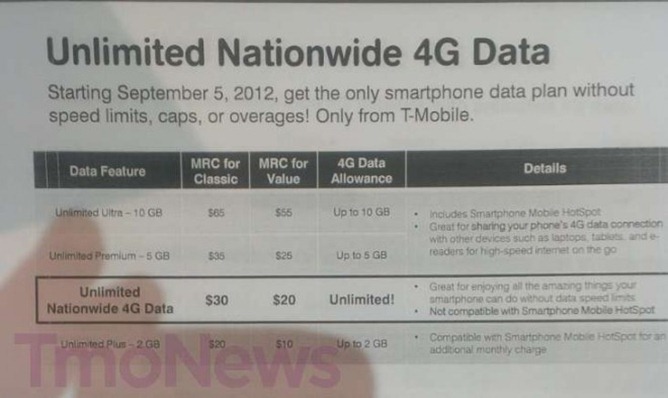 The new unlimited 4G data plan will be available starting on September 5, and it does away with all the caps and throttling that angered power users. T-Mobile will be charging a downright reasonable rate of $30 per-month for those on the classic plans, and just $20 for anyone on a value plan. The only bummer here is that the new plan cannot be combined with hotspot usage. If you want to tether to your phone (legitimately), you'll still have to get the 5GB or 10GB hotspot package, which won't include unlimited data on the phone.

T-Mobile's current data plans come with 2GB of full-speed data, after which speeds can be knocked back to 2G for the rest of the billing cycle. That is technically unlimited data – most of it is just very slow. With this in mind, the new unlimited data plan seems like a big step up for those that need it.

BELLEVUE, Wash. — Aug. 22, 2012 — T-Mobile USA, Inc., today announced an industry first — a truly Unlimited Nationwide 4G Data plan. Featuring no data caps, speed limits or bill shock, as well as fast, dependable nationwide 4G coverage, T-Mobile’s new Unlimited Nationwide 4G Data plan offers the ultimate worry-free experience. The new plan is designed to satisfy both data-hungry customers who want to experience all their smartphones are capable of and those wanting the peace of mind of never having to keep track of their data usage.

Today’s smartphones offer amazing experiences, and consumers are increasingly relying on them for everything from navigation, entertainment and shopping to just staying connected. With the introduction of the Unlimited Nationwide 4G Data plan, T-Mobile® is the only U.S. carrier to empower customers to do what they want, when they want, with their smartphones by making fast, nationwide 4G data accessible for everyone — without limits and at a great value.

“We’re big believers in customer-driven innovation, and our Unlimited Nationwide 4G Data plan is the answer to customers who are frustrated by the cost, complexity and congested networks of our competitors,” said Kevin McLaughlin, vice president, marketing, T-Mobile USA.  “Consumers want the freedom of unlimited 4G data. Our bold move to be the only wireless carrier to offer an Unlimited Nationwide 4G Data plan reinforces our value leadership and capitalizes on the strength of our nationwide 4G network.”

For customers seeking an unlimited experience on their smartphones, T-Mobile offers several ways for new and existing customers to take advantage of its Unlimited Nationwide 4G Data plan. New customers can purchase any smartphone in T-Mobile’s robust lineup of innovative devices or bring their own compatible smartphone and have access to a worry-free unlimited data experience on T-Mobile’s fast nationwide 4G network. Current T-Mobile customers on Classic or Value plans can simply upgrade their existing service by adding an Unlimited Nationwide 4G Data plan.