We'd previously heard that Play Store Gift Cards are set to arrive officially on August 26th. While that may be true for stores that are still waiting on their shipments (read: not Target), Google has decided to take the wraps off of the whole thing ahead of time. The elusive URL we've seen floating around for a gift card landing page is now live. As well as that support page we found last night. 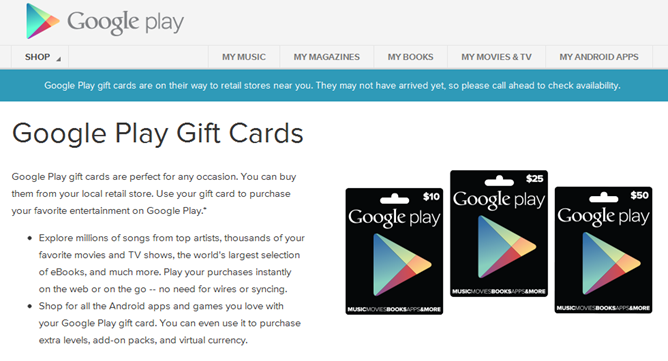 The landing page confirms that gift cards are on their way to Radio Shack, Target and Game Stop. No official confirmation of any other retailers, although we've heard that Wal-Mart is also likely definitely on the short list. Also, the support page adds a couple new interesting pieces of information. For starters, as expected, you can only use gift cards to purchase content sold in U.S. dollars. While Google does a pretty good job of naturalizing prices, this does mean if you travel abroad, your Play Store balance won't be available because you'll be seeing prices in the currency of the land you're in.

Additionally, the support page says that you cannot combine your Play Store balance with any other forms of payment. So, just hang on to that spare ten cents in your account until you get another card, I guess.

At this point, just about all the information that can be out is, so the only thing that's left is for them to start showing up in stores. So, who's planning on giving these out this holiday season?

T-Mobile MyTouch Q Review: There Are Good Budget Phones, And Then There's The MyTouch Q