If affordable phones, unlimited 4G LTE data, and no contracts are all things that appeal to you, then today's announcement from MetroPCS may be of interest.

For starters, the pay-as-you-go company announced the LG Motion, a new mid-range device that will run on its 4G LTE network. It didn't give a lot in way of specs, but the device features a 3.5" display, 1.2GHz dual-core processor, and Android 4.0 for $150. Small, powerful, and more affordable that other carriers' on-contract pricing. Not bad. 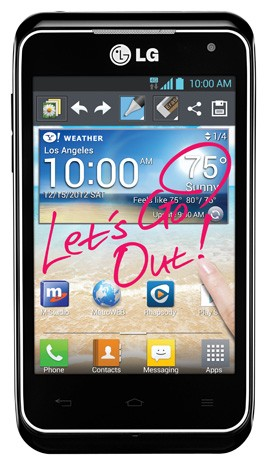 More interestingly, the company also announced a new all you can eat 4G LTE data plan for $55 per month for a single line. Those with family plans can add second, third, and even fourth lines for $50 a piece after that. MetroPCS announced this plan as available for "a limited time," so if the thought of unlimited talk, text, and 4G data is something that strikes your fancy, haste will be in order.

Both the new plan and the LG Motion will be available "later this week."

DALLAS – (August 21, 2012) – MetroPCS Communications, Inc. (NYSE: PCS) now offers more choices for those consumers who want to have it all from their wireless service at unparalleled value with a new even more affordable addition to its 4G LTE smartphone portfolio – the LG Motiontm 4G. The powerful AndroidTM smartphone puts a feature-rich handset experience and exceptional 4G LTE service within reach for value-conscious consumers – starting at just $40 per month – taxes and regulatory fees included.

Building on its vision to provide the best deal in town for 4G LTE, MetroPCS also today unveiled a promotional 4G LTE service plan that is only available for a limited time but offers benefits that can last a lifetime – unlimited talk, text and 4G LTE data for only $55 per month for a single line. Families can get this unbeatable offer for just $50 per month on the account’s second, third and fourth lines. Even though the promotional service plan is available for a limited time only, customers will continue to receive service at the promotional price for as long as they maintain service with MetroPCS. The $55 service plan can save individuals up to $2,200 over the course of two years in service costs alone when compared to similar competitor offers.

MetroPCS is celebrating the launch of this new handset and unlimited 4G LTE promotional plan launches by offering consumers a mail-in rebate on the second of any two 4G LTE smartphone purchases. The rebate offer applies to all MetroPCS 4G LTE phones, including the newly launched LG Motion 4G, meaning customers can get a feature-rich 4G LTE smartphone for as low as $99 plus tax and unlimited 4G LTE wireless service for as low as $50 per month.

As MetroPCS’ first smartphone powered by Android 4.0 (Ice Cream Sandwich), the LG Motion 4G has everything consumers need to fully utilize the benefits of one of the most advanced Android versions available. Its 1.2 GHz dual-core processor makes multi-tasking easy while consumers use the phone’s 5MP still camera, 1080p HD video recorder and browse the web and multimedia on the 3.5” touchscreen.

· LG QuickMemo™ gives users the ability to personalize messages and share comments across a wide range of content including web pages, digital magazines, photos and more – all with a simple swipe of a finger

· Fun camera features like Cheese Shutter, which allows users to take a photo using just the sound of their voice, and Time Catch Shot which takes multiple photos at once and allows users to pick the best one

The LG Motion 4G supports MetroPCS’ 4G LTE Mobile Hotspot service, for additional charge, and is offered at $149 plus tax. Consumers interested in purchasing the device can visit their local MetroPCS store or go online to purchase the phone and sign up for service beginning later this week.

T-Mobile MyTouch Q Review: There Are Good Budget Phones, And Then There's The MyTouch Q