Twitter posted an update on its developer blog today, detailing the changes coming with v1.1 of the Twitter API. In summary, things aren't looking good for any 3rd party Twitter app. In fact, many will find themselves crippled (though not outright banned, it seems).

While some 3rd party Twitter clients like HootSuite seem to be in the clear, the company is making it extremely obvious that it no longer wants such apps to exist. To that end, a number of new limitations on how 3rd party applications can access Twitter will soon be implemented. Here are some of the important ones.

User Token Maximum: "... we will require you to work with us directly if you believe your application will need more than one million individual user tokens."

API Authorization: "... we will require every request to the API to be authenticated."

Those are all big limitations on 3rd party Twitter clients, but there's one more that's really the kicker, the one that promises to basically end all major apps of this kind out there. Here it is:

Additionally, if you are building a Twitter client application that is accessing the home timeline, account settings or direct messages API endpoints (typically used by traditional client applications) or are using our User Streams product, you will need our permission if your application will require more than 100,000 individual user tokens. (emphasis ours)

That requirement will mean the end of any 3rd party Twitter client with more 100,000 users, unless Twitter decides it's better for them to let it stay alive for now. But, in the end, Twitter wants these apps to die, and they say so in no uncertain terms:

Nearly eighteen months ago, we gave developers guidance that they should not build client apps that mimic or reproduce the mainstream Twitter consumer client experience. And to reiterate what I wrote in my last post, that guidance continues to apply today.

They even give us this handy graph. Everything in the upper right portion is not OK, according to Twitter. 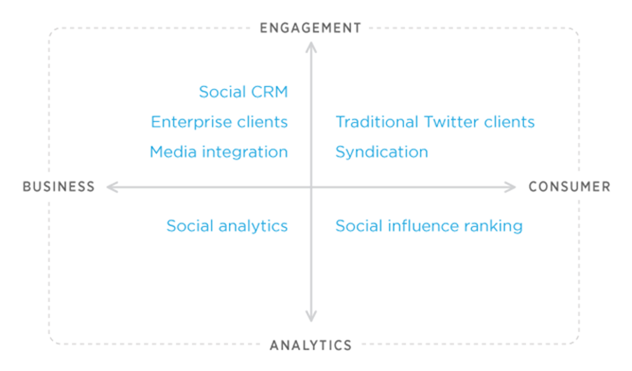 So, kiss pretty much every popular Twitter client that isn't the official Twitter client goodbye (except TweetDeck, of course). This won't happen overnight, though, as the blog post indicates developers will have 6 months from the release of API 1.1 before v1.0 is fully deprecated in March 2013.

It's also entirely possible Twitter will decide the backlash from this decision is far worse than expected and give up on its efforts to kill the 3rd party client ecosystem, but we aren't betting on it.